A glimmer of hope for patients with leukodystrophies

Leukodystrophies are deadly neurodegenerative diseases that affect one in 7,000 children and remain incurable. These genetic diseases attack myelin or the “insulating rubber sheath” surrounding neurons, which leads to deteriorating health for affected children. Today, nearly 20 types of leukodystrophies have been characterized, but many other forms remain undefined, leaving nearly 40 per cent of families awaiting a diagnosis. An international research team, led by Dr. Geneviève Bernard from the Research Institute of the McGill University Health Centre (RI-MUHC) and Dr. Benoit Coulombe from the Institut de recherches cliniques de Montréal (IRCM), has identified a new gene associated with 4H leukodystrophy, one of the common forms of the disease. Their findings have been published in Nature Communications this week.

“We are finally starting to better understand this terrible disease. By discovering mutations on this new gene called POLR1C, which account for nearly 10 per cent of cases with this type of leukodystrophy, we now have a better idea of the impact they have on nervous system cells,” says one of the principal co-authors, Dr. Bernard, neurologist at the Montreal Children’s Hospital of the MUHC (MCH-MUHC) at the Glen site and assistant professor of Paediatrics and of Neurology and Neurosurgery at McGill University. “My team and I had paved the way in 2011 by identifying two genes (POLR3A and POLR3B) responsible for 4H leukodystrophy, which represents about 85 per cent of patients with the disease. However, approximately 15 per cent of patients with this type of leukodystrophy lack a genetic diagnosis. Until now, we did not know why mutations on the previously-discovered genes caused leukodystrophy.” 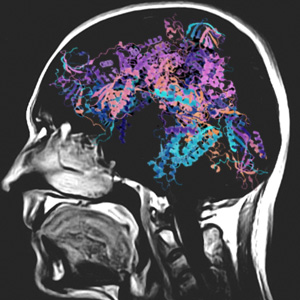 “Indeed, we found that mutations on POLR1C caused a problem in the assembly and cellular localization of an enzyme, RNA polymerase III, which plays a very important role in the proper functioning of our cells,” states the second principal co-author, Dr. Coulombe, full IRCM research professor and director of the Translational Proteomics research unit at the IRCM. “The cells’ lack of ability to produce RNA polymerase III compromises the genetic program controlled by this enzyme, thereby inducing a particularly harmful effect in specialized nerve cells.”

H: MRI of the brain (axial view) of a child with leukodystrophy : myelin deficiency in the brain is characterized by signal abnormality, in other terms, white matter is white instead of almost black (see K for comparison).

According to Dr. Coulombe, an important step has been taken, not only by identifying a new gene causing leukodystrophy, but also by shedding light on the molecular mechanism that allows these gene mutations to cause harm. “Understanding the mechanisms that affect the biogenesis of RNA polymerase III will now guide our efforts in the development of new diagnostic tools to better predict the evolution and severity of the disease, and new therapeutic tools to help sick children,” add Drs. Bernard and Coulombe.

“The ability to diagnose this rare and incurable disease has an enormous impact on families, as it helps them better prepare for what lies ahead,” explains Dr. Bernard. This is the case for the family of Xavier, 8 years old, who was diagnosed with leukodystrophy in 2013. Since then, his family who lives in Outaouais, visits Dr. Bernard at the MCH-MUHC every three months. “Even if we currently lack information to help our son, the research conducted by Dr. Bernard and her colleagues is very important to understand the causes of the disease and to find future treatments to help children with leukodystrophy,” says Xavier’s mother, Mrs. Émilie Lapointe.

The project was funded by the Canadian Institutes of Health Research and Dr. Coulombe’s Bell-Bombardier Chair of Excellence (IRCM). Dr. Bernard is a FRQS Chercheur-boursier clinicien Junior 1.

The article Recessive mutations in POLR1C cause a leukodystrophy by impairing biogenesis of RNA polymerase III is available online on the Nature Communications website.

The Research Institute of the McGill University Health Centre (RI-MUHC) is a world-renowned biomedical and health-care hospital research centre. Located in Montreal, Quebec, Canada, the Institute is the research arm of the McGill University Health Centre (MUHC) affiliated with the Faculty of Medicine at McGill University. The Institute supports over 500 researchers, 1,200 graduate students, post-docs and fellows devoted to a broad spectrum of fundamental and clinical research. Over 1,600 clinical research studies are conducted within our hospitals each year. The Research Institute of the MUHC is supported in part by the Fonds de recherche du Québec - Santé (FRQS). www.rimuhc.ca

The Institut de recherches cliniques de Montréal (IRCM) is a renowned biomedical research institute located in the heart of Montréal’s university district. Founded in 1967, it is currently comprised of 35 research units and four specialized research clinics (cholesterol, cystic fibrosis, diabetes and obesity, hypertension). The IRCM is affiliated with the Université de Montréal, and the IRCM Clinic is associated to the Centre hospitalier de l’Université de Montréal (CHUM). It also maintains a long-standing association with McGill University. The IRCM is funded by the Quebec ministry of Economy, Innovation and Export Trade (Ministère de l’Économie, de l’Innovation et des Exportations). www.ircm.qc.ca

For more information or to schedule an interview with the study’s authors, please contact:

The Mystery Infection: from Laboratory to Bedside