In her 33 years working in Housekeeping at the Montreal Children’s Hospital (MCH), Lyne Martinelli has gotten to know many patients. There was one girl though, who Lyne already knew before she ever became a patient. Raphaëlle Tousignant is Lyne's step granddaughter, and when was admitted to the Children’s in 2012, she began a long journey that would demand strength and determination from her and her entire family.

At nine years old, Raphaëlle was active, athletic and passionate about the sport of ringette. After falling on the ice during a game, a bump formed on her right hip but she didn’t think much of it. But the bump didn’t get better so Raphaëlle’s mom made an appointment with their pediatrician. “The doctor thought it was normal since I noticed the bump after falling on the ice, but to be cautious, I was sent for more tests,” says Raphaëlle. 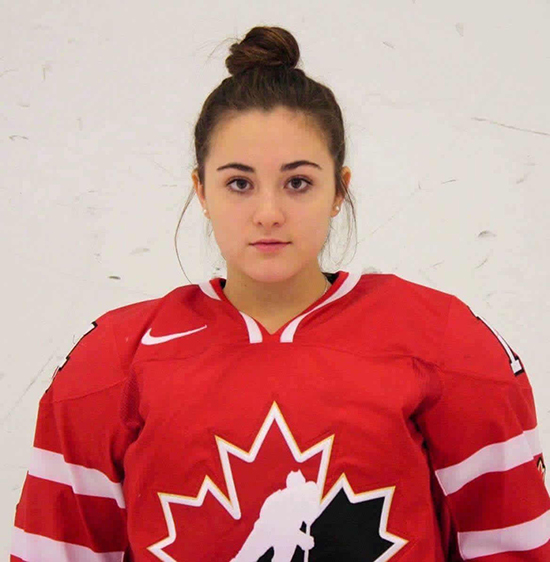 A biopsy revealed something far more serious, and Raphaëlle was put under the care of Dr. Sharon Abish, a pediatric oncologist at the Montreal Children’s Hospital. Raphaëlle soon began treatment for osteosarcoma, a cancer of the bone most commonly found in children and adolescents.

A long journey ahead

The diagnosis was followed by eight months of intensive chemotherapy. Raphaëlle and her family were in and out of the hospital dividing their time between the Hematology-Oncology day clinic and the ward where Raphaëlle would sometimes have to stay overnight. “The goal was to shrink the tumour with chemotherapy to make it more easily resectable,” explains Dr. Abish. Unfortunately, Raphaëlle, her family and her care team would be dealt with a heartwrenching blow: the chemotherapy hadn’t shrunk the tumour and Raphaëlle would have to undergo a hemipelvectomy, a major surgery to remove her right leg, hip and part of her pelvis.

“It was not easy,” says Raphaëlle’s mom, Valérie. At the doctors’ suggestion she and her husband broke the devastating news to Raphaëlle. “We sat with Raphaëlle and told her that she would have to give up her leg to save her life,” says Valérie. “Her immediate concern was how she was going to play ringette without her leg.”

Surgical oncologist Dr. Robert Turcotte performed the procedure. “We always try to remove the bone and maintain the limb, but we couldn’t do it in Raphaëlle’s case,” he says.

The 12-hour surgery required ten blood transfusions, after which Raphaëlle spent a week in the intensive care unit followed by a month on the surgical ward and another round of chemotherapy. Drs. Abish and Turcotte agree that the strength and determination of Raphaëlle and her family got her through the treatment, surgery and healing process.

Valérie Lamarche, a nurse on the hematology-oncology unit, would often change the dressings on Raphaëlle’s surgical wound, an incredibly painful but necessary procedure. “She was so tough. It was rough at first but together we developed a routine to change the dressings and she would bravely allow us to do our work.” 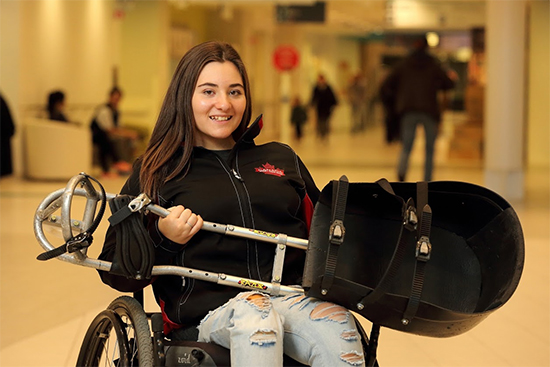 Valérie Lamarche, a nurse on the hematology-oncology unit, would often change the dressings on Raphaëlle’s surgical wound, an incredibly painful but necessary procedure. “She was so tough. It was rough at first but together we developed a routine to change the dressings and she would bravely allow us to do our work.” Valérie remembers one day asking who Raphaëlle’s favourite Disney princess was, and she answered Merida from the movie Brave. “Merida was an unexpected answer yet so fitting since Merida is a go-getter and a strong character,” she recalls.

Not long after her surgery, while still in hospital, Raphaëlle had to face the daunting task of getting out of bed to ensure her muscles didn’t atrophy. After weeks in the hospital, Raphaëlle just wanted to go home. “It drove me to work hard to get better,” she says. Eventually, her father had an idea to keep Raphaëlle active and to ensure that she’d still be able to enjoy playing an ice sport: he introduced her to sledge hockey. "When I got back on the ice, I gave sledge hockey a try and fell in love with it."

Getting back on the ice

For the last three years, Raphaëlle has been playing sledge hockey; her passion for it is evident, and she lights up when talking about it. “I have friends on the team who have amazing jobs, get to travel and spend time with their boyfriends. They are able to live normal lives despite their handicap.”

Even on the ice, Raphaëlle’s strength is on display: her game is physical and competitive and she never loses sight of the puck. She—and her style of play—did not go unnoticed this past August when she made the Canadian National Women’s sledge hockey team. At 14, she is the youngest member on the team, and she has already travelled throughout Canada and to Europe, playing in tournaments and exhibition games. 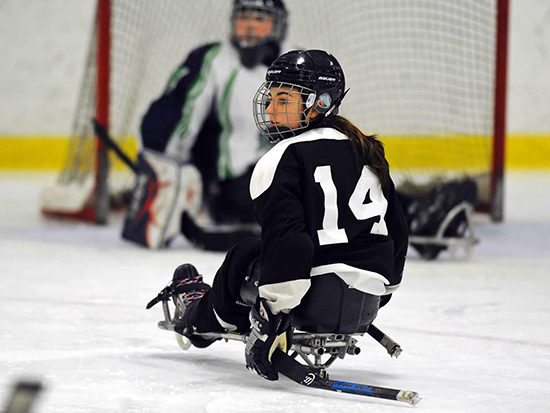 Raphaëlle’s dream dœs not end with making Team Canada, “I want women’s sledge hockey to become popular enough to be a paralympic sport, and my goal is to compete in the 2022 games,” she says.

Her family’s pride is undeniable: on a recent visit to the hospital, Raphaëlle’s mom gave personalized copies of Raphaëlle’s official Team Canada photo to the many people who were part of her daughter’s care team. Raphaëlle’s little brother did his part too by carrying the heavy sledge throughout the visit. Lyne regularly shares photos of Raphaëlle playing sledge hockey with her colleagues and friends at the Children’s to keep them up-to-date on the teen’s remarkable progress.

Raphaëlle is not a person who is easily forgotten. M’hamed Benmokhtar, another nurse who cared for her on the hematology-oncology ward says, “When days on the ward are a little bit more difficult, remembering Raphaëlle’s strength inspires me to continue working hard and doing my best.”

From Montreal to Maputo

Face to face with...