Following the 2018 Nobel Prize for Medicine, global attention is now more than ever turned toward the promise of immunotherapy in oncology. An international team’s work has shed new light on a molecule called TIM-3 that might play a key role in the regulation of the immune response. Scientists and physicians from the Research Institute of the McGill University Health Centre (RI-MUHC) and the Montreal Children's Hospital of the MUHC (MCH-MUHC), in collaboration with French teams from AP-HP, Inserm, Université Paris-Descartes, Université Paris-Diderot, and the Imagine Institute at the Necker-Enfants Malades hospital, have singled out this protein as the next potential target for immunotherapy treatments in patients with cancer and other diseases.

"This study places the TIM-3 protein at the heart of immune system regulation. We could use it as a target in immunotherapies to trigger enhanced immune responses in patients with cancer and better treat them," says co-lead author of this study, Dr. Nada Jabado, who is a researcher from the Child Health and Human Development Program at the RI-MUHC and an hemato-oncologist at MCH-MUHC. 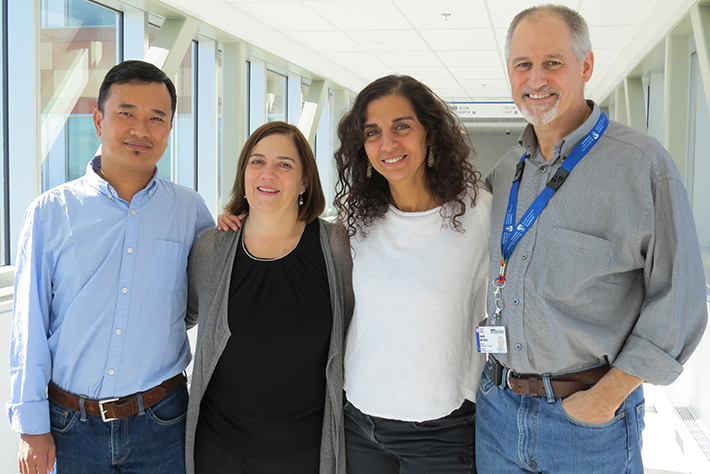 Researchers found that when the TIM-3 protein is suppressed or inactive, the immune system becomes completely “unleashed” and T cells are uncontrollably over-activated, resulting in a rare form of lymphoma (a form of cancer that starts in the lymphocytes) called subcutaneous panniculitis T lymphoma (LTSCP).

The team of researchers has identified two founder mutations at the origin of this syndrome, which act directly on the TIM-3 protein, preventing it from expressing itself on the surface of the lymphocytes and attacking the cancer cells. They also found that this form of lymphoma associated with over-activation of the immune response was more widespread than they first thought.

These results, which led researchers to consider this form of lymphoma as a new genetic disease, are being published in the journal Nature Genetics on Monday, October 29.

"It all started here in Montreal with a brother and sister stricken with a rare form of lymphoma, which led to the identification of a much more widespread genetic syndrome across Southeast Asia, Polynesia, Australia and Europe," explains lead author of the study, Tenzin Gayden, a postdoctoral researcher in Dr. Jabado's laboratory at the RI-MUHC.

In the winter of 2016, Dr. David Mitchell and Dr. Sharon Abish, hemato-oncologists at the Montreal Children's Hospital, contacted their colleague Dr. Jabado when one of their 9-year-old patients presented exactly the same symptoms as her younger brother, who was treated a year earlier for LTSCP. The girl had long episodes of fever and began to have edema on the skin.

Suspecting a genetic cause, the team looked into this medical puzzle. Using point of care genetic sequencing technique at the McGill University and Génome Québec Innovation Centre, the researchers discovered that the two sick children carry the same mutation on a gene called HAVCR2, and that it was transmitted by their parents.

In discussions with colleagues in Australia and France, the team realized they too had similar cases of patients with the same mutation (Tyr82Cys) who seemed to be mostly of East Asian or Polynesian descent. Another mutation (Ile97Met), on the same gene, was identified in patients of European origin. In all, 17 pediatric and adult cases were the subject of this scientific publication.

Beyond rare cases of lymphoma

In most countries of the world, lymphoma cases are treated like cancers, when in reality they are intensified responses of our immune system.

"For these patients with this rare form of lymphoma, our results reinforce the use of immunosuppressive therapies that will provide much better results and fewer side effects than cytotoxic chemotherapy," says Dr. Nada Jabado, who is also a professor of Pediatrics and Human genetics at McGill University.

Researchers are now trying to see if patients with autoimmune diseases such as lupus - a disease where the immune system turns against the body itself - may have some TIM-3 dysfunction. There would also be promising avenues for the treatment and understanding of cancers, infectious diseases such as HIV or even malaria as well as multiple sclerosis.

This work was supported a grant from the Fondation des étoiles, INSERM, CNRS, l’AP-HP, Université Paris-Descartes and Collège de France.

About the Research Institute of the MUHC : The Research Institute of the McGill University Health Centre (RI-MUHC) is a world-renowned biomedical and healthcare research centre. The Institute, which is affiliated with the Faculty of Medicine of McGill University, is the research arm of the McGill University Health Centre (MUHC) – an academic health centre located in Montreal, Canada, that has a mandate to focus on complex care within its community. The RI-MUHC supports over 420 researchers and close to 1,200 research trainees devoted to a broad spectrum of fundamental, clinical and health outcomes research at the Glen and the Montreal General Hospital sites of the MUHC. Its research facilities offer a dynamic multidisciplinary environment that fosters collaboration and leverages discovery aimed at improving the health of individual patients across their lifespan. The RI-MUHC is supported in part by the Fonds de recherche du Québec – Santé (FRQS). www.rimuhc.ca.