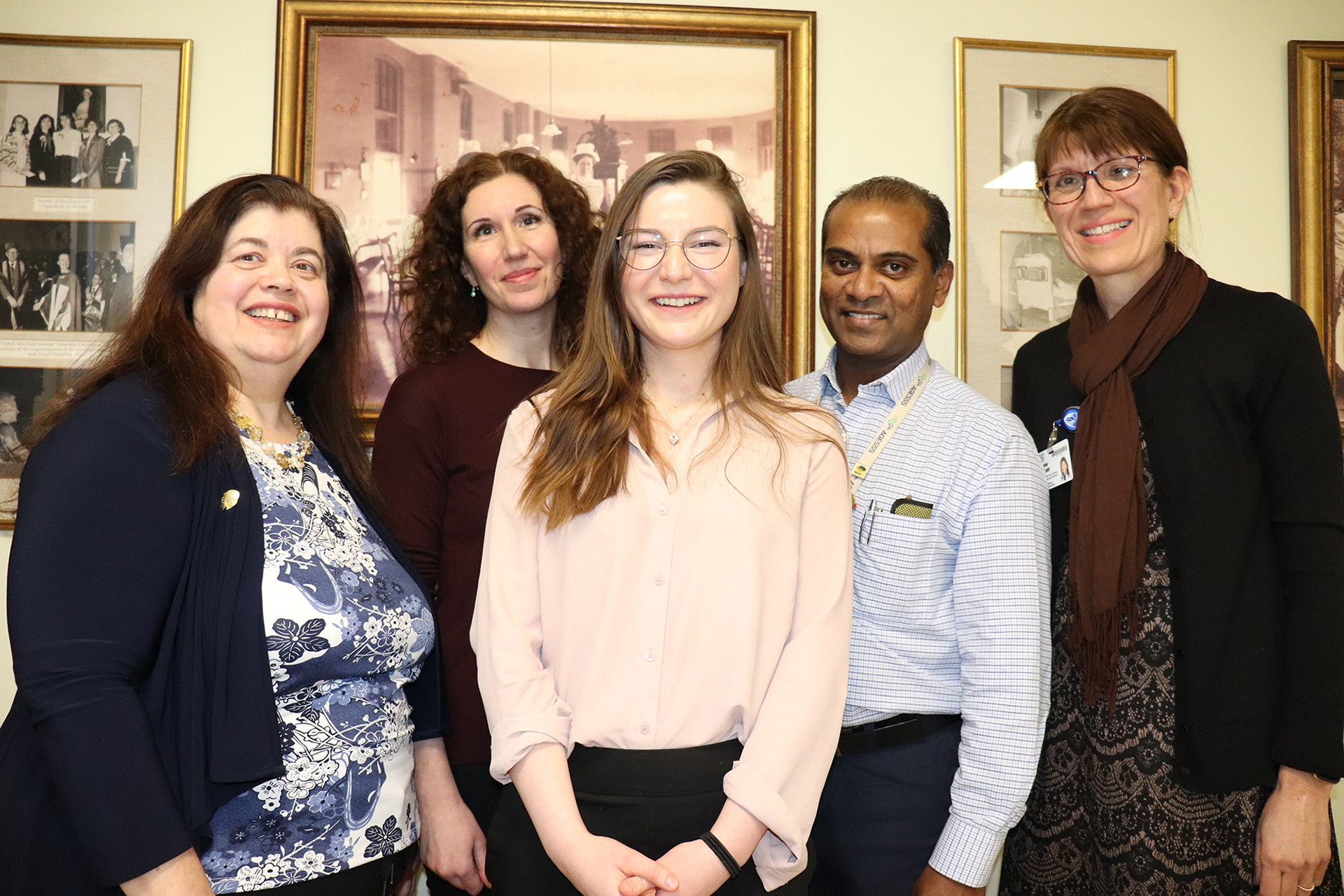 Laurence Cobo was pleasantly surprised when her presentation at a McGill University Health Centre (MUHC) Nursing Executive meeting was preceded by an exciting announcement: she is one of three finalists for the Prix Florence of the Ordre des infirmières et infirmiers du Québec (OIIQ) in the Relève category.

Laurence, who is a nursing practice advisor was delivered the good news by Chantal Souligny, Director of Nursing Resources, and Luisa Ciofani, Board member of l’Ordre régionale des infirmières et infirmiers de Montréal et Laval right before she was to make a presentation to members of the MUHC Nursing Executive Committee.

“This nomination is not only a great honour for Laurence but also for the entire nursing team at the MUHC,” says Chantal. “Laurence has a bright future in the nursing profession, and I think this nomination is well-suited to her and what she’s already accomplished in her short career.”

The Prix Florence, comprising eight categories, is the most prestigious prize awarded to members of the nursing profession in the province of Quebec. The Relève category is awarded to a nurse with fewer than five years’ experience who has demonstrated remarkable community or professional engagement.

Laurence started her career in Neurosurgery at the CHUM and later transferred to the Intensive Care Unit (ICU) at the Montreal Neurological Hospital (Neuro), before joining the team of Alain Biron, Associate Director of Nursing in Clinical Practice. She was also the Vice-President of the Comité de la Relève infirmière, a committee that aims to give young nurses a sense of belonging and support to help them successfully develop their career.

Siva Moonsamy, nurse manager of the Intensive Care Unit at the Neuro, hired Laurence and says that from the onset, she demonstrated qualities of a leader.“Laurence is a great learner; she adapts quickly and is engaged,” he says. “She became part of the nursing council because she wants her voice to be heard.”

Marianne Sofronas, nurse clinician in the ICU at the Neuro, also worked closely with Laurence and wrote the necessary applications to submit her nomination. “Laurence is an exceptional nurse and human being, so writing the letter of reference was one of the easiest things I’ve had to do. She‘s already accomplished so much and can’t think of anyone who deserves this award more than Laurence,” says Marianne.

“I feel great and honoured that my colleagues nominated me for this award,” says Laurence. “I work with wonderful people, so this nomination means even more to me. My colleagues are professional, intelligent, ethical and have taught me so much. Without them, I would not be here.”

The winners of all the prizes will be announced on May 12 at the annual Prix Florence Gala. This year marks the Quebec Order of Nurses centennial year.

On the Year of the Nurse, the MUHC celebrates the 200th anniversary of a visionary

Breathing new life into the MUHC Council of Nurses