Meet RIPK3: Good Cop, Bad Cop, all in one

Montreal — Each year, influenza kills half a million people globally with the elderly and very young most often the victims. In fact, the Centers for Disease Control and Prevention reported 37 children have died in the United States during the current flu season. Aside from getting the flu shot and employing smart hand hygiene, there are no other methods of prevention. However, a team of scientists from the Research Institute of the McGill University Health Centre (RI-MUHC) and McGill University, led by Immunologist Dr. Maziar Divangahi, have discovered a protein that could soon help minimize the impact of the influenza season and become a critical player in the fight against lung infections. 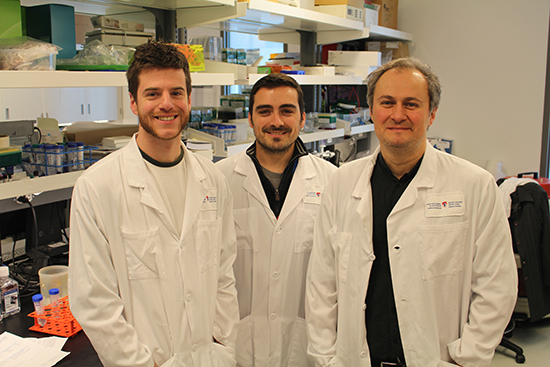 From left to right: Jeffrey Downey and Dr. Erwan Pernet (first study's authors) with Dr. Maziar Divangahi in their lab at the Glen site of the Research Institute of the McGill University Health Centre.

Dr. Divangahi’s lab at the Glen site of the RI-MUHC in Montreal has taken on the challenge of trying to understand how the mechanisms of the immune system fight the flu in the hopes of finding new immunotherapies to combat the virus. The discovery of the RIPK3 protein that is involved in the regulation of immune response to the flu means help may be on the horizon. Their findings were published in the open-access journal PLoS Pathogens.

RI-MUHC scientists have long been interested in understanding the immune system in relation to influenza. They already knew a type of protein called type I IFN (produced by macrophages, a type of white blood cell) which stimulates cells to block virus production. In the case of the flu, type I IFN helps in restricting the replication of the flu virus in our lungs. But the question remained: how did the type I IFN networks operate and what mechanisms were involved to promote their efficacy? 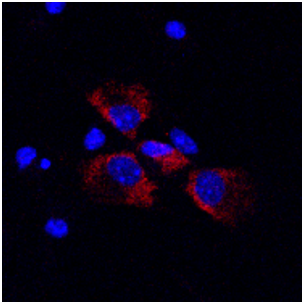 Production of IFNbeta (red colour and its nuclei in blue), a type of protein which stimulates immune cells to block the replication and production of the influenza virus.

The team uncovered an exciting and surprising function of the RIPK3 protein, which sits in the cytoplasm of cells, including macrophages. Most past studies found RIPK3 to be involved in a form of cell death but in the case of the flu infected macrophages, RIPK3 behaves differently.

It turns out that when it comes to the flu, RIPK3 actually functions as a helpful sidekick to type I IFN’s pathway by increasing IFN production, thereby helping to block the replication of the influenza virus. Further, the team found that macrophages that lack RIPK3 are highly susceptible to the flu infection.

“That underlines the importance of RIPK3 in mounting an effective immune response to the virus,” says senior author Dr. Divangahi, who is a scientist at the Meakins-Christie Laboratories and a member of the Translational Research in Respiratory Diseases Program at the RI-MUHC. He is also a professor of Medicine at McGill University and a member of the McGill International TB Centre. “What is exciting is that by understanding exactly how RIPK3 works to boost IFN’s potency we can look at avenues in the manufacturing of anti-flu drugs.”

The research also turned up another interesting discovery related to RIPK3. In this case, it involved the immunity to another lung infection, Tuberculosis (TB). The immune cells of interest here were, as with the flu, macrophages. With TB, the researchers investigated the same biochemical pathway involved in RIPK3, yet surprisingly, the outcome was the opposite for TB.

Stimulating RIPK3 with TB created a surfeit of dying macrophages and promoted the survival and dissemination of the disease rather than blocking it as in the case of the flu. Both findings support the fact that RIPK3 is a critical player in immunity involving lung infections.

“Pulmonary infections like TB and influenza are significant global problems. Former avenues of research haven’t always had the most promising results,” says Jeff Downey, a Ph.D. in Dr. Divangahi’s lab at the RI-MUHC and the first author of the influenza paper. “Looking at these new pathways and new ideas can be really helpful in potentially finding new therapies in both cases.”

These flu findings were a collaboration of individuals from the Faculties of Medicine of McGill and Laval University. Collaborators at McGill include Dr. James Martin, Dr. Salman Qureshi and Dr. Donald Vinh. The work at Laval was headed by Dr. Philippe Joubert. For the TB work, it was a joint effort between Harvard and McGill Universities. Dr. Heinz Remold led the research at Harvard.