The McGill University Health Centre (MUHC) would like to congratulate its Surgeon-in-Chief Dr. Gerald Fried, who was elected Chair of the Board of Regents of the American College of Surgeons (ACS) during the College’s annual Clinical Congress, held in Boston, October 21-25.

“Dr. Gerald Fried’s election as Chair of the Board of Regents of the ACS is without a doubt a testament to his constant push to improve clinical practice and medical education,” noted Dr. Pierre Gfeller, President and Executive Director of the McGill University Health Centre. “That he should be the first Canadian to assume this role since the ACS was founded over 100 years ago also tells me that he has earned the respect of thousands of surgical confrères around the world. This makes the MUHC proud to count Dr. Fried amongst its leaders.”

A general surgeon, Dr. Fried is Edward W. Archibald Professor and Chair of the Department of Surgery at McGill’s Faculty of Medicine. 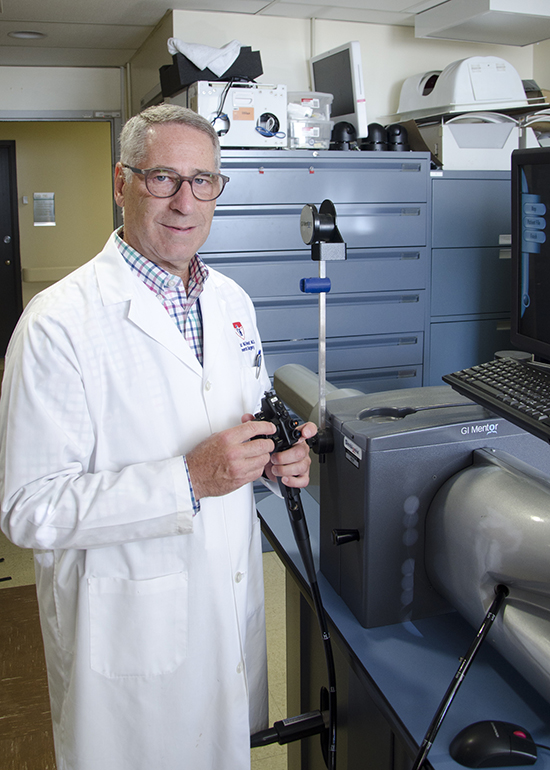 He is also the founder of the Steinberg-Bernstein Centre for Minimally Invasive Surgery and Innovation at the MUHC. Dr. Fried previously served as Adair Family Chair of Surgical Education and the program director for general surgery at McGill.

A general surgeon, Dr. Fried is Edward W. Archibald Professor and Chair of the Department of Surgery at McGill’s Faculty of Medicine. He is also the founder of the Steinberg-Bernstein Centre for Minimally Invasive Surgery and Innovation at the MUHC. Dr. Fried previously served as Adair Family Chair of Surgical Education and the program director for general surgery at McGill.

“The American College of Surgeons is the largest and most influential surgical organization in the world,” says Dr. Fried. “This is a wonderful opportunity for me to take a leadership role in the College as it addresses key issues related to training the next generation of surgeons, measuring and optimizing the quality of surgical care, and advocating for critical political issues such as firearms safety and disparity in health care delivery.”

In his role as Chair of the Board of Regents, Dr. Fried will work closely with ACS Executive Director Dr. David B. Hoyt and will chair the Regents’ Finance and Executive Committees. The College’s 24-member Board of Regents formulates policy and is ultimately responsible for managing the affairs of the College. The Board’s diversity and variety of experiences and interests among its members enable the Regents to represent views related to myriad issues in contemporary surgery. The ACS is the largest organization of surgeons in the world with more than 80,000 members.

His academic interests include surgical education and optimizing surgical outcomes. His research has explored teaching and evaluating procedural skills, especially in the fields of minimally-invasive and endoscopic surgery. In 1990, Dr. Fried established Minimally Invasive Surgery (MIS) as a clinical program at the MUHC. He and his colleagues have played a leading role in developing a simulator-based program to teach and assess fundamental skills in minimally-invasive surgery at the Steinberg-Bernstein Centre for Minimally Invasive Surgery at McGill University. The program has become widely adopted around the world. He is also interested in how optimal processes of surgical care can impact the trajectory of recovery of the surgical patient.

Dr. Fried has trained many fellows who have gone on to hold leadership positions in Canada and internationally. He was elected to the McGill Honour Role for Educational Excellence. He also received the National Association of Faculties of Medicine of Canada’s John Ruedy Award for Innovation in Medical Education. Dr. Fried has served as president of the Society of American Gastrointestinal and Endoscopic Surgeons (SAGES), the Canadian Association of General Surgeons, the Central Surgical Association, and the James IV Association of Surgeons (Canadian section).  In 2011, Dr. Fried was elected to the Canadian Academy of Health Sciences. He has served on editorial boards of six influential journals of surgery, and has given hundreds of lectures internationally.

Earlier this fall, Dr. Fried received the Meritorious Service Cross from the Governor General of Canada for “meritorious acts bringing benefit and honour to Canada.”

“It is recognition, not of my personal contributions, but of the efforts of a team with whom I have had the privilege to work over the past 25 years,” says Dr. Fried. “They have inspired me, taught me and held me to the highest standard.”

(With files from the American College of Surgeons and McGill University)