Historically, our view of host defense against infection was that we must eliminate pathogens to eradicate disease. However, this perspective has recently been challenged as scientists have taken a lesson from plant biologists about an ancient strategy involving the ability to “tolerate” rather than “resist” infection to maintain health. This concept, referred to as “disease tolerance”, provides an opportunity to develop new strategies that mitigate the consequences of infection. 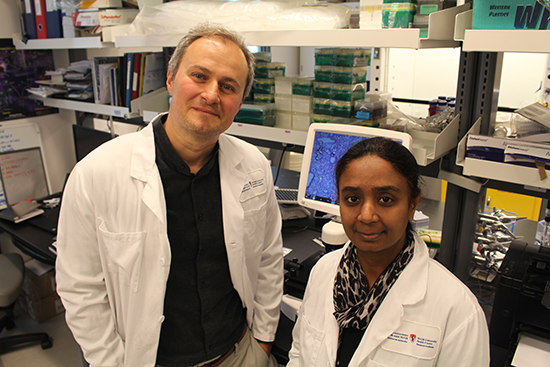 Maziar Divangahi and Nargis Khan at the Meakins-Christie Laboratories at the Research Institute of the MUHC, Glen site.

Since the discovery of Mycobacterium tuberculosis, or Mtb, (the bacteria causing TB) over a century ago, great progress has been made in defining strategies that facilitate elimination of the bacteria. For instance, the discovery of antibiotics was a major breakthrough in the treatment of active TB. However, greater than 90 per cent of TB-infected individuals tolerate the bacteria without any treatment.

Dr. Maziar Divangahi, a pulmonary immunologist at the Research Institute of the McGill University Health Centre (RI-MUHC), and a professor of Medicine at McGill University in Montreal, has been trying to explain why the vast majority of people infected with Mtb can tolerate the infection without developing disease. Clinicians refer to this condition as “latent tuberculosis”, and it affects a quarter of the global population. “TB is a perfect example of disease tolerance,” says Dr. Divangahi who is also the associate director of the Translational Research in Respiratory Diseases Program at the RI-MUHC and a member of the McGill International TB Centre.

Dr. Divangahi’s team found that rather than fighting to resist the pathogen, the body’s tolerance to Mtb is the key mechanism for preventing the spread of the infection. More surprisingly, they found that having excessive levels of T cells, which are known as soldiers of our immune system, could cause more harm than good.

“We always thought that having more T cells would provide better protection against TB. Instead, we found that it could imbalance disease tolerance causing extensive tissue damage and ultimately killing the host,” says Dr. Divangahi, lead author of the study published today in Science Immunology, who is the also the associate director of the Meakins-Christie Laboratories. 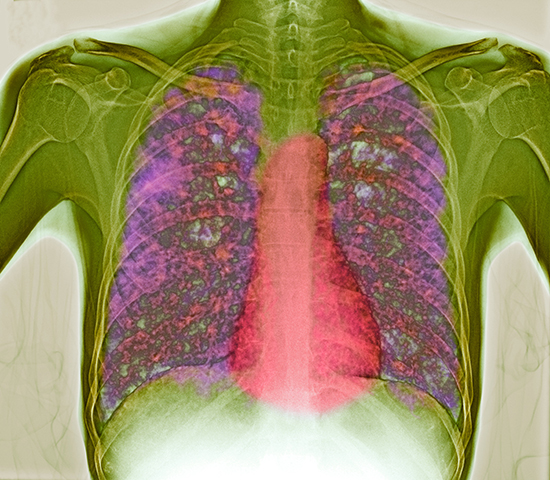 Our body’s defense system is divided into two arms: one is resistance, which aims to eliminate the pathogen, while the other is tolerance, which is designed to control the tissue damage caused by the infection.

“While disease tolerance is an established field of research in simple organisms such as plants, our understanding of this host defense strategy in humans is very limited,” says Dr. Divangahi.

Although, immunologists and vaccinologists have made progress in the study of host resistance to infectious diseases, little is known about the mechanisms of disease tolerance in humans.

A key protein in disease tolerance

Dr. Divangahi’s team determined that a protein in the mitochondria called cyclophilin D (CypD) acts as a key checkpoint for T cell activation. Through collaboration with Dr. Russell Jones from McGill University, who is an international expert in T cell biology, they identified that CypD is required for controlling T cell metabolism.  “T cells are traditionally considered to be important in eliminating Mtb,” says Dr. Divangahi. “However, we found that increasing T cell activation in mice by eliminating a metabolic checkpoint unexpectedly compromised host survival without any impact on the growth of Mtb.”

“In contrast to conventional thinking, we show that T cells are essential for regulating the body’s tolerance to Mtb infection,” explains one of the study’s first authors, Dr. Nargis Khan, who is currently a postdoctoral fellow in Dr. Divangahi’s lab at the RI-MUHC.

Giving the widespread drug resistance to various Mtb strains the limited pipeline of effective antibiotics and the lack of an efficient vaccine, alternative approaches to treat TB are urgent. “If we could understand the mechanisms of ‘natural immunity’ that controls TB in 90-95 per cent of infected individuals,” says Dr. Divangahi,“we will able to design a novel therapy or vaccine to substantially reduce the world wide burden of this ancient disease.”

This work was supported by grants from the Canadian Institutes of Health Research (CIHR).  Dr. Divangahi holds a Fonds de recherche du Québec–Santé (FRQS) Award and the Strauss Chair in Respiratory Diseases.