Harnessing the body's power in fight against cancer

Notoriety never mattered to John Souaid until cancer came along.

Now, the 78-year-old grandfather of five is filled with optimism following his participation in a cutting-edge global trial involving immunotherapy treatment for lung cancer. Many cancers have the ability to subdue our immune system’s natural ability to recognize and kill mutated cells. Immunotherapy overcomes this spell and allows the body’s own immune system to target and destroy mutated cancer cells. These therapies have shown great promise and were the subject of this year’s Nobel prize.

John had no notion of this treatment when he stepped into Dr. Jonathan Spicer’s office at the Montreal General Hospital of the McGill University Health Centre (MUHC) in early 2017. He arrived feeling fatigued and having suffered significant weight loss after being diagnosed with stage 3 cancer after a large tumour was found in his right lung. It didn’t take long for Dr. Spicer to identify John as a potential candidate for a new phase-3 trial investigating the use of immunotherapy prior to surgery in lung cancer patients. The MUHC was the first among 145 international lung cancer treatment centres to open the study.

“At first I was devastated. When I was told I had lung cancer it was very difficult. But I had hope when I met Dr. Spicer." — John Souaid

I didn’t know anything about immunotherapy but I trusted him and had nothing to lose, so I immediately said ‘let’s go for it.’ I could have thought about it or dragged it on but I was confident of what he was telling me about this trial,” says John, who became the first person in the world to enroll in this trial.

“There haven’t been changes in survival outcomes for cancer for 25 years primarily because treatment options – chemotherapy, radiation and surgery – haven’t changed,” says Dr. Spicer, a thoracic surgeon and scientist at the MUHC.

“Immunotherapy harnesses the power of our own immune system to fight off our cancer with promising results in clinical trials all over the world and signals a major step in lung cancer care." — Dr. Jonathan Spicer. 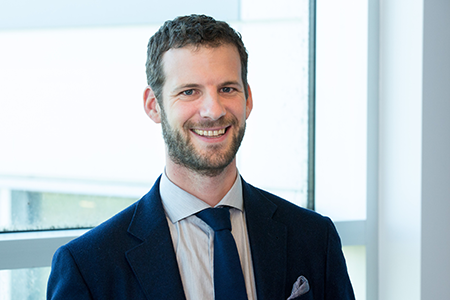 There is a real synergy between innovative clinical trials and developing personalized medicine pipelines. This seamless flow of information from the clinic to the lab and back to the patient is what we are establishing here.”

Immunotherapy has the capacity to double the number of lung cancer survivors over the next decade, says Dr. Spicer. By leveraging all available data, the right regimen that is most likely to work for each patient can be given first. He believes this approach offers the greatest chance for a cure and the fewest harmful side effects.

“Patients live with a fear of recurrence for rest of their lives but they don’t have to,” says Dr. Spicer. “Our goal is to offer each patient an insurance policy: At the time of surgery we can generate live lab-based tumor models of the patient’s disease which can be used to develop the most sophisticated and personalized treatment plan should they eventually develop progression or recurrence of their cancer. This is the true essence of personalized cancer care.”

Like John, Diane Laforce had never heard of immunotherapy before Dr. Spicer’s introduction following a diagnosis of stage 2 lung cancer. After eight weeks of treatment followed by surgery, she is doing well and remains optimistic about the benefits of this treatment.

Diane also underwent a preventative short course of chemotherapy after surgery. “There’s been great follow-up from the team so I never felt worried.”

Diane received three pre-operative immunotherapy treatments two weeks apart leading up to surgery. Neither John nor Diane spoke of any major side effects or discomfort.

“I’m working every day, my appetite is back, I haven’t had any side effects,” says John, a staple in the lingerie manufacturing business since 1962. “And being the first patient admitted to this trial in the world? It’s incredible! I’m making history and, hopefully, I can make history for all the other cancer patients who have what I have.”