Reminder to all patients and visitors: Wearing a mask is mandatory at the MUHC. Click here for more information .

Critical years ahead in fight against hepatitis C virus

In the last five years, new drugs have revolutionized the treatment of hepatitis C (HCV), a virus that causes serious liver disease. These medicines, which are safer and more effective than older therapies, have raised hope of one day eliminating HCV as a public health problem. But numerous challenges remain: limited access to treatment, insufficient diagnosis, high cost of drugs, and not least of all, HIV-HCV co-infection, a growing epidemic that accelerates liver disease. On World Hepatitis Day (July 28), we talk to Dr. Marina Klein, research director of the Chronic Viral Illness Service the McGill University Health Centre and professor of Medicine at McGill University about the current situation and about her research on patients with HIV and chronic hepatitis.

For the first time, we are starting to see the potential for controlling hepatitis C as an epidemic and possibly even eradicating it in certain populations. – Dr. Marina Klein 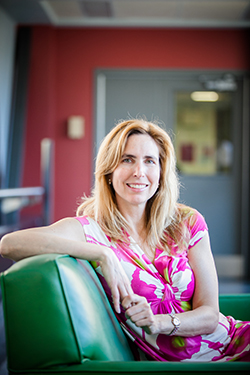 How does one get hepatitis C?

The hepatitis C virus is a blood-borne virus. Currently in Canada, the vast majority of people acquire it through injection drug use, but before the 1980s, it was commonly acquired through tainted blood transfusions. Globally, between 130 and 150 million people have Hepatitis C.

We hear so much about HIV and comparatively little about hepatitis. Is this justified?

We have reached a point where there are more deaths worldwide as a result of viral hepatitis B and C than from HIV or tuberculosis.

In North America, data show that deaths from HIV have been dropping because people have access to such good treatment. However, we’re entering a critical period where we will see more people ill from hepatitis C. People who are infected can remain asymptomatic for decades until they develop serious liver damage. Since the peak of hepatitis C infections happened sometime in the 70s and 80s, we anticipate people are starting to get very sick.

Let’s talk about the new treatment for hepatitis C? How revolutionary is it?

The new drugs available in the last five years are unquestionably more effective and safer than older therapies. After three months, with no injections and no side effects, they can cure more than 90 per cent of people, independent of how bad their liver disease is. Studies have shown that people who have cirrhosis can benefit enough that they may not need a transplant. Unfortunately, patients who are cured can become re-infected., if they don’t change their lifestyle.

If the treatment is so effective, why aren’t more people being cured?

The treatments are still extraordinarily expensive.  For a treatment course that is 12 weeks, you are looking at a list price of about $50,000. Prices are slowly coming down, because of competition and the arrival of different molecules in the market, but the costs are still far too high to envision treating everyone. That’s led to restrictions as to who should be treated. You have to have a certain level of liver damage before you can access the treatments. The problem is that people who are transmitting the virus are often younger and have just recently become infected, so are not currently eligible for treatment.

So on one end, you have to treat patients who are very ill, but on the other, you have to prevent the spread of infection. How do you solve this dilemma?

We need a much broader public health approach. India and Pakistan, for their part, have increased the generic production of these medications, driving the cost down to under $500 per treatment course. The actual cost of manufacturing these medications is actually very small, something like $250. Australia, for instance, negotiated as a country with pharmaceutical companies to have bulk pricing models, so that the more people are treated the lower each treatment course costs. Consequently, they can offer treatment to all.

The province of Quebec is taking a balanced approach: they treat the sickest first, and as those are cured, they expand the access. This spreads out the cost over a number of years but many people still can't get access to treatment.

It is estimated about 75,000 Canadians are infected with HIV and about 30 per cent of those people are co-infected with hepatitis C. There is a large and growing epidemic of co-infection among Aboriginal communities, particularly in Saskatchewan and Manitoba.

What’s the main focus of your research program?

My research focuses on the impact of new hepatitis C therapy on the health outcomes of people who are co-infected. We will examine not only how the two viruses interact, but also how social determinants affect treatment. We are following over 1,500 people recruited from 18 hospital-based and community-based centres across Canada.

What are the challenges faced by people who are co-infected?

First of all, HIV accelerates the progression of hepatitis C. This means that people who have both infections will progress more rapidly to liver damage and cirrhosis and eventually death from liver disease.

It’s also important to take into consideration the socioeconomic and demographic risk factors for acquiring these two infections. Hepatitis C infection can be concentrated in certain populations who usually don’t come forward to be tested and have a limited access to hepatitis C therapy, such as injection drug users and Indigenous peoples.

Finally, there is the stigma associated with HIV and hepatitis C, two infectious diseases associated with injection drug use. It’s not just pharmacology, it’s also education. In Saskatchewan, we’re partnering with the local reservation to build a model of care that meets the needs of the community and at the same time brings treatment to people who need it. The communities are very supportive.

So, advocacy is important. What else can be done to eradicate HCV infection in Canada?

We’re working with the Canadian Network on Hepatitis C (CanHep C) to increase awareness and to sensitize the federal government to the importance of improving HCV prevention and health outcomes for Canadians. Canada’s Health Minister has recently reaffirmed her commitment to working towards a national framework for hepatitis C elimination, and that’s really positive. We hope leadership on the federal level will help spur provinces to work along the same lines.

In May 2016, The World Health Assembly adopted the first “Global Health Sector Strategy on Viral Hepatitis, 2016-2021”, a strategy that aims to eliminate viral hepatitis as a public health problem by reducing new viral hepatitis infections by 90 per cent and reducing deaths due to viral hepatitis by 65 per cent by 2030.

Montréal sans HépC: a fight to eliminate HCV in Montreal