What's behind your thirst?

Montreal – Scientists at the Research Institute of the McGill University Health Centre (RI-MUHC) and Duke University have made a breakthrough that advances our understanding of how the brain detects and prevents dehydration. They have identified the structure of a key protein located in the brain, which is involved in body hydration and that could control temperature. The findings, which were recently published in the print issue of Cell Reports, could have important clinical implications, as this protein could be a target for the development of treatments and diagnostic tests for many health problems associated with the imbalance of bodily fluids, commonly seen in the emergency room. 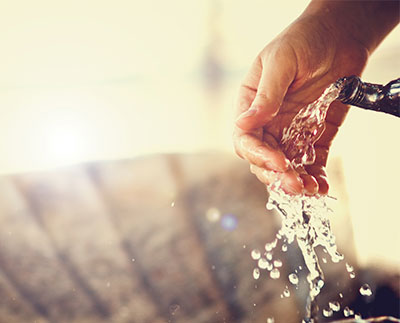 “We have identified what we think is the first protein that could allow the brain to monitor physiological temperature and it is important because this protein contributes to how the brain detects heat and triggers adaptive responses such as thirst,” says Dr. Charles Bourque, the study's lead author and a researcher at the Centre for Research in Neuroscience at the RI-MUHC and at the Faculty of Medicine of McGill University. “This protein, which is an ion channel, that regulates the flow of ions across the cell membrane, is thought to play a crucial role in balancing body fluids (water, blood, etc.) and sodium (salts) levels, and changes in its regulation could be involved in linking salt to hypertension, and provoking fluid retention following cardiac failure, sepsis or brain trauma.”

Dr. Bourque's team is investigating how the brain controls osmoregulation which is the maintenance of salt and water balance across membranes within the body's fluids. Modification of osmoregulation can have major health consequences on humans.  Indeed, sodium is necessary to regulate the water content in our body, as a result, high salt levels can be damaging for kidneys and increase blood pressure. 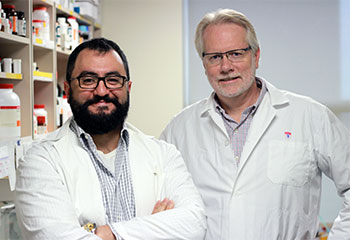 According to Dr. Bourque, defects in the body’s fluid balance are among the most common reasons for being hospitalized when admitted to the emergency room. For example, hyponatremia, a disorder that occurs when the level of sodium in the blood is abnormally low. Sodium is an electrolyte that helps regulate the amount of water that's in and around our cells. When this happens, the body's water levels rise, and brain cells begin to swell, leading to nausea, vomiting and headaches. It is known to be a very common problem in older adults and it can result in changes in cognition and even seizures.

‘’Now that we have discovered the protein's structure, we can try to understand how this ion channel is involved in conditions such as hyponatremia. This would give us tools to modify the channel’s mechanism of action and either prevent or treat the condition,’’ says study’s first author, Cristian Zaelzer, Postdoctoral Fellow in Dr. Bourque’s laboratory at the RI-MUHC.

The discovery stems from previous work by Dr. Bourque’s team in his laboratory at the Montreal General Hospital of the MUHC. In 2006, they demonstrated that a gene called TRPV1 played an essential role in detecting changes in balancing the body's fluids. Two years later, researchers discovered that the same gene was involved in detecting body temperature. However, the type of protein produced by the TRPV1 gene was still unknown.

“Collaborating with Dr. Bourque’s group led to identification of a long sought-after TRPV1 ion channel that functions in neurons, making them sense osmotic pressure and temperature ,” explains senior co-author Dr. Wolfgang Liedtke, associate professor of neurology, anesthesiology and neurobiology at Duke University. “This ion channel becomes active during dehydration, switching on the neurons in a part of the brain called the hypothalamus, which instructs the body to act in order to maintain its fluid balance. This can be achieved by triggering a sense of thirst, and also by the secretion of vasopressin – an antidiuretic hormone that acts to promote the retention of water by the kidneys – to maintain body fluid balance.”

“Interestingly, our work also shows that the ion channel is an alternate product of the gene TRPV1 that normally codes for the capsaicin receptor that detects “hot’’ chilli peppers, adds Dr. Bourque. It is like nature has engineered a salt receptor out of a pepper receptor.”

This study was funded by the Canadian Institutes of Health Research (CIHR). The article DN-TRPV1: A Molecular Co-detector of Body Temperature and Osmotic Stress is available online on Cell Reports website (Open Access).