MONTREAL – At least a third of reactions in children with food-induced anaphylaxis to a known allergen occur under adult supervision, according to a new study led by AllerGen researchers in Quebec, Ontario and Alberta.

The findings, published in the November issue of Pediatric Allergy and Immunology, reveal that inadvertent exposures to a known food allergen in children are frequent, and in the majority of supervised reactions, adults other than the child’s parents were present. 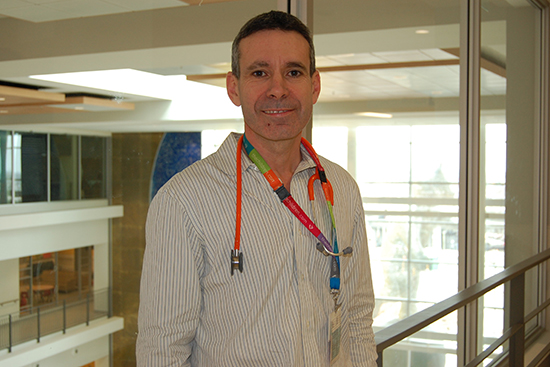 Dr. Moshe Ben-Shoshan, a pediatric allergist and immunologist at the Research Institute of the McGill University Health Centre (RI-MUHC) and at the Montreal Children’s Hospital of the MUHC

“Food accounts for the majority of anaphylaxis cases in children presenting to the emergency department,” says the study’s senior author Dr. Moshe Ben-Shoshan, a pediatric allergist and immunologist at the Research Institute of the McGill University Health Centre (RI-MUHC) and at the Montreal Children’s Hospital of the MUHC. “We were interested to find out how often parents and caregivers are present when exposures to food allergens happen, and to estimate the impact of other factors such as food-labelling issues.” This is the first study to evaluate risk factors of food-induced anaphylaxis to a known food allergen in children.

Anaphylaxis, known to be a sudden and potentially life-threatening allergic reaction, was defined in the study as a reaction involving at least two organ systems and/or a sudden drop in blood pressure.

The researchers collected data from pediatric anaphylaxis cases seen at four Canadian emergency departments between December 2012 and April 2015, as part of AllerGen’s nationwide Cross-Canada Anaphylaxis REgistry (C-CARE). C-CARE is led by RI-MUHC researcher Dr. Ben-Shoshan and is the first prospective study on anaphylaxis to assess the rate, triggers and management of anaphylaxis in different provinces and settings across Canada.

“Our team found that 31.5% of anaphylaxis cases occurred under adult supervision, and in the majority of those cases (65%), the supervising adult was not the child’s parent,” says Dr. Ben-Shoshan who is aslo an assistant professor of Pediatrics at McGill University. “These findings highlight the importance of increasing education and awareness among all caregivers of food-allergic children.”

The role of food labelling was also highlighted in the research. “A third of all reactions were attributed to food-labelling issues according to the participants,” adds the study’s lead author Dr. Sarah de Schryver, an AllerGen trainee and a Research Fellow at McGill University. “However, most reactions to labelled food occurred when the label was ignored, which indicates that better management strategies are needed to avoid accidental ingestions both inside and outside the home.”

This research was made possible by funding from AllerGen NCE Inc., Health Canada and Sanofi. The study involved a team of researchers from the McGill University Health Centre, Sainte-Justine Hospital, Hôpital Sacré Coeur, the University of Calgary, the Children’s Hospital at London Health Sciences Centre, and Health Canada.

AllerGen NCE Inc., the Allergy, Genes and Environment Network (est. 2004), is a national research network dedicated to improving the quality of life of people suffering from allergic and related immune diseases. Funded by Industry Canada through the federal Networks of Centres of Excellence (NCE) Program, the Network is hosted at McMaster University in Hamilton. Visit http://allergen-nce.ca for more information.

The Research Institute of the McGill University Health Centre (RI-MUHC) is a world-renowned biomedical and healthcare research centre. The Institute, which is affiliated with the Faculty of Medicine of McGill University, is the research arm of the McGill University Health Centre (MUHC) – an academic health centre located in Montreal, Canada, that has a mandate to focus on complex care within its community. The RI-MUHC supports over 460 researchers and close to 1,300 research trainees devoted to a broad spectrum of fundamental, clinical and health outcomes research at the Glen and the Montreal General Hospital sites of the MUHC. Its research facilities offer a dynamic multidisciplinary environment that fosters collaboration and leverages discovery aimed at improving the health of individual patients across their lifespan. The RI-MUHC is supported in part by the Fonds de recherche du Québec – Santé (FRQS). rimuhc.ca.