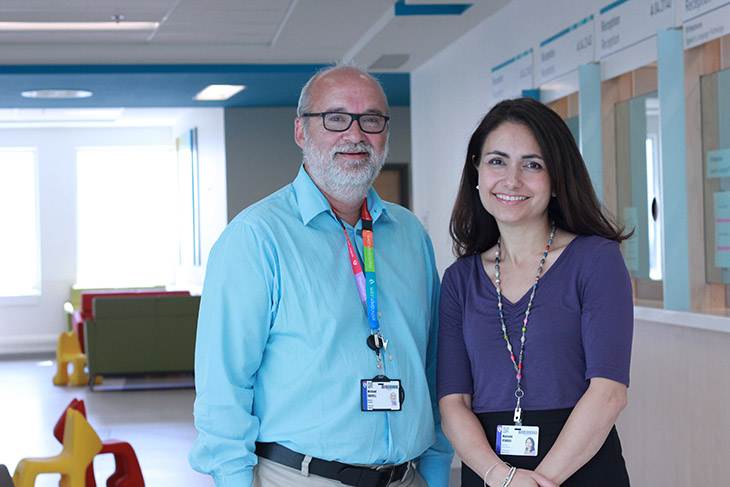 TORONTO/MONTREAL – Cerebral palsy (CP) is the most common cause of physical disability in children. Every year 140 children are diagnosed with cerebral palsy in Quebec.

It has historically been considered to be caused by factors such as birth asphyxia, stroke and infections in the developing brain of babies. In a new game-changing Canadian study, a research team from The Hospital for Sick Children (SickKids) and the Research Institute of the McGill University Health Centre (RI-MUHC) has uncovered strong evidence for genetic causes of cerebral palsy that turns experts’ understanding of the condition on its head.

MRI of the brain of a healthy child: gray matter is pale gray and white matter is dark gray.

MRI of the brain of a child with cerebral palsy: red arrows show scarring over the central gray matter leading to stiffness and problems in the coordination of movements.

MRI of the brain of a child with cerebral palsy: red arrows show a loss of white matter leading to stiffness and a paralysis, which is more pronounced of the left side.

The study, published online August 3 in Nature Communications could have major implications on the future of counselling, prevention and treatment of children with cerebral palsy.

“Our research suggests that there is a much stronger genetic component to cerebral palsy than previously suspected,” says the lead study author Dr. Maryam Oskoui, Paediatric neurologist at The Montreal Children’s Hospital (MCH) of the MUHC, co-director of the Canadian Cerebral Palsy Registry and an Assistant Professor in the Department of Paediatrics and Department of Neurology and Neurosurgery at McGill University. “How these genetic factors interplay with other established risk factors remains to be fully understood. For example, two newborns exposed to the same environmental stressors will often have very different outcomes. Our research suggests that our genes impart resilience, or conversely a susceptibility to injury.”

Children with cerebral palsy have difficulties in their motor development early on, and often have epilepsy and learning, speech, hearing and visual impairments. Two out of every thousand births are affected by cerebral palsy with a very diverse profile; some children are mildly affected while others are unable to walk on their own or communicate. Genetic testing is not routinely done or recommended, and genetic causes are searched for only in rare occasions when other causes cannot be found.

The research team performed genetic testing on 115 children with cerebral palsy and their parents from the Canadian Cerebral Palsy Registry, many of which had other identified risk factors. They found that 10 per cent of these children have copy number variations (CNVs) affecting genes deemed clinically relevant. In the general population such CNVs are found in less than one per cent of people. CNVs are structural alterations to the DNA of a genome that can be present as deletions, additions, or as reorganized parts of the gene that can result in disease.

“When I showed the results to our clinical geneticists, initially they were floored,” says Dr. Stephen Scherer, Principal Investigator of the study and Director of The Centre for Applied Genomics (TCAG) at SickKids. “In light of the findings, we suggest that genomic analyses be integrated into the standard of practice for diagnostic assessment of cerebral palsy.”

The study also demonstrates that there are many different genes involved in cerebral palsy. “It’s a lot like autism, in that many different CNVs affecting different genes are involved which could possibly explain why the clinical presentations of both these conditions are so diverse,” says Scherer, who is also Director of the University of Toronto McLaughlin Centre. “Interestingly, the frequency of de novo, or new, CNVs identified in these patients with cerebral palsy is even more significant than some of the major CNV autism research from the last 10 years. We’ve opened many doors for new research into cerebral palsy.”

“Finding an underlying cause for a child’s disability is an important undertaking in management,” says Dr. Michael Shevell, co-director of the Canadian Cerebral Palsy Registry and Chair of the Department of Paediatrics at the MCH-MUHC. “Parents want to know why their child has particular challenges. Finding a precise reason opens up multiple vistas related to understanding, specific treatment, prevention and rehabilitation. This study will provide the impetus to make genetic testing a standard part of the comprehensive assessment of the child with cerebral palsy.”

About The Hospital for Sick Children
The Hospital for Sick Children (SickKids) is recognized as one of the world’s foremost paediatric health-care institutions and is Canada’s leading centre dedicated to advancing children’s health through the integration of patient care, research and education. Founded in 1875 and affiliated with the University of Toronto, SickKids is one of Canada’s most research-intensive hospitals and has generated discoveries that have helped children globally.  Its mission is to provide the best in complex and specialized family-centred care; pioneer scientific and clinical advancements; share expertise; foster an academic environment that nurtures health-care professionals; and champion an accessible, comprehensive and sustainable child health system. SickKids is proud of its vision for Healthier Children. A Better World. For more information, please visit www.sickkids.ca.

About The Research Institute of the McGill University Health Centre
The Research Institute of the McGill University Health Centre (RI-MUHC) is a world-renowned biomedical and healthcare research centre. The Institute, which is affiliated with the Faculty of Medicine of McGill University, is the research arm of the McGill University Health Centre (MUHC) - an academic health centre located in Montreal, Canada, that has a mandate to focus on complex care within its community. The RI-MUHC supports over 500 researchers, and over 1,200 students, devoted to a broad spectrum of fundamental, clinical and health outcomes research at the Glen and the Montreal General Hospital sites of the MUHC. Our research facilities offer a dynamic multidisciplinary environment that fosters collaboration and leverages discovery aimed at improving the health of individual patients across their lifespan. Over 1,600 clinical research projects and trials are conducted within the organization annually. The RI-MUHC is supported in part by the Fonds de recherche du Québec - Santé (FRQS). www.rimuhc.ca