Patient tattoos doctors’ and hospital initials on his arm

In spring 2009, Normand Dubé was diagnosed with an advanced case of esophageal cancer. But he still managed to stay upbeat during his treatment. How? Optimism, humour and gratitude. 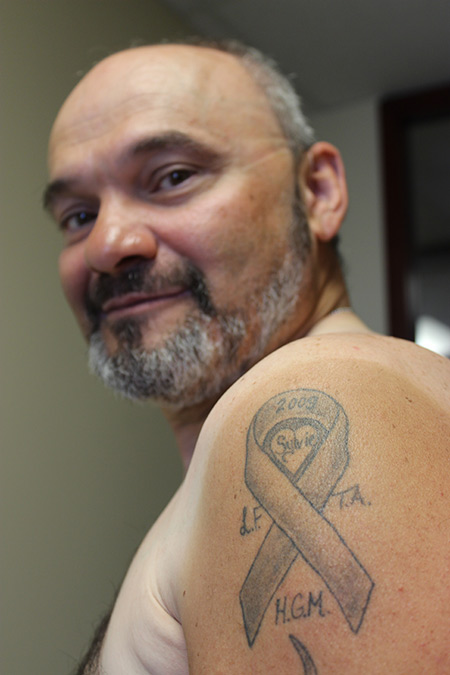 Normand Dubé shows off his tattoo with the name of his wife, Sylvie, the initials of his doctors, Lorenzo Ferri and Thierry Alcindor, as well as the initials of the Montreal General Hospital.

When Dr. Lorenzo Ferri, director of the Division of Thoracic Surgery at the Montreal General Hospital (MGH) of the McGill University Health Centre (MUHC) first met with Mr. Dubé and discussed his treatment options, he stressed that the cancer was locally advanced and the chance of surviving five years was likely in only one out of three people in his situation. Mr. Dubé immediately answered, “This isn't great. You should take me on as a patient. I'll increase that average for you!”

The following months weren't easy. Between each chemotherapy session, Mr. Dubé lost 15 to 20 pounds. “I had no appetite, but my wife kept a close eye on my diet, as I had to gain weight to be strong enough for surgery.” Then, with a slight quiver in his voice, he added, “I was very irritable. My wife had the patience of an angel with me, and I continue to thank her.”

After his surgery in September 2009, Mr. Dubé was hospitalized in the Thoracic Surgery Unit at the MGH for nine days. Even there, he found a way to laugh and make others laugh. “One day I took a surgical glove and walked up and down the hallway like a chicken. I had a chest tube, catheter, IV, and tubes up my nose, but I made the rounds anyway to make other people laugh. It did them good and did me some good too.”

“They took such good care of me,” he said on a more serious note. “The staff was fantastic!” He added that he appreciated the punctuality of Dr. Thierry Alcindor, the oncologist who followed him at the MGH, and that Dr. Ferri came to see him every day he was in the hospital. “I couldn't believe it!” he exclaimed. Even the meals impressed Mr. Dubé.

As a symbol of his extreme gratitude for the support and care he received, Mr. Dubé got a tattoo with the name of his wife, Sylvie, the initials of his doctors, Lorenzo Ferri and Thierry Alcindor, as well as the initials of the Montreal General Hospital. Today, five years later, Dr. Ferri believes Mr. Dubé's cancer has most likely gone into complete remission.

When asked where he got this ability to keep looking on the bright side, Mr. Dubé answered, “I definitely had to force myself to be optimistic at times and not worry my loved ones. But I've always had a lot of drive, and been aware there were people in the world suffering more than I was. I could have either felt sorry for myself or tell myself that I could get through it.” The he added, “I'm not a doctor, so I couldn't heal my cancer. But I could control my attitude. And I was lucky enough to get the best care team to support me!”