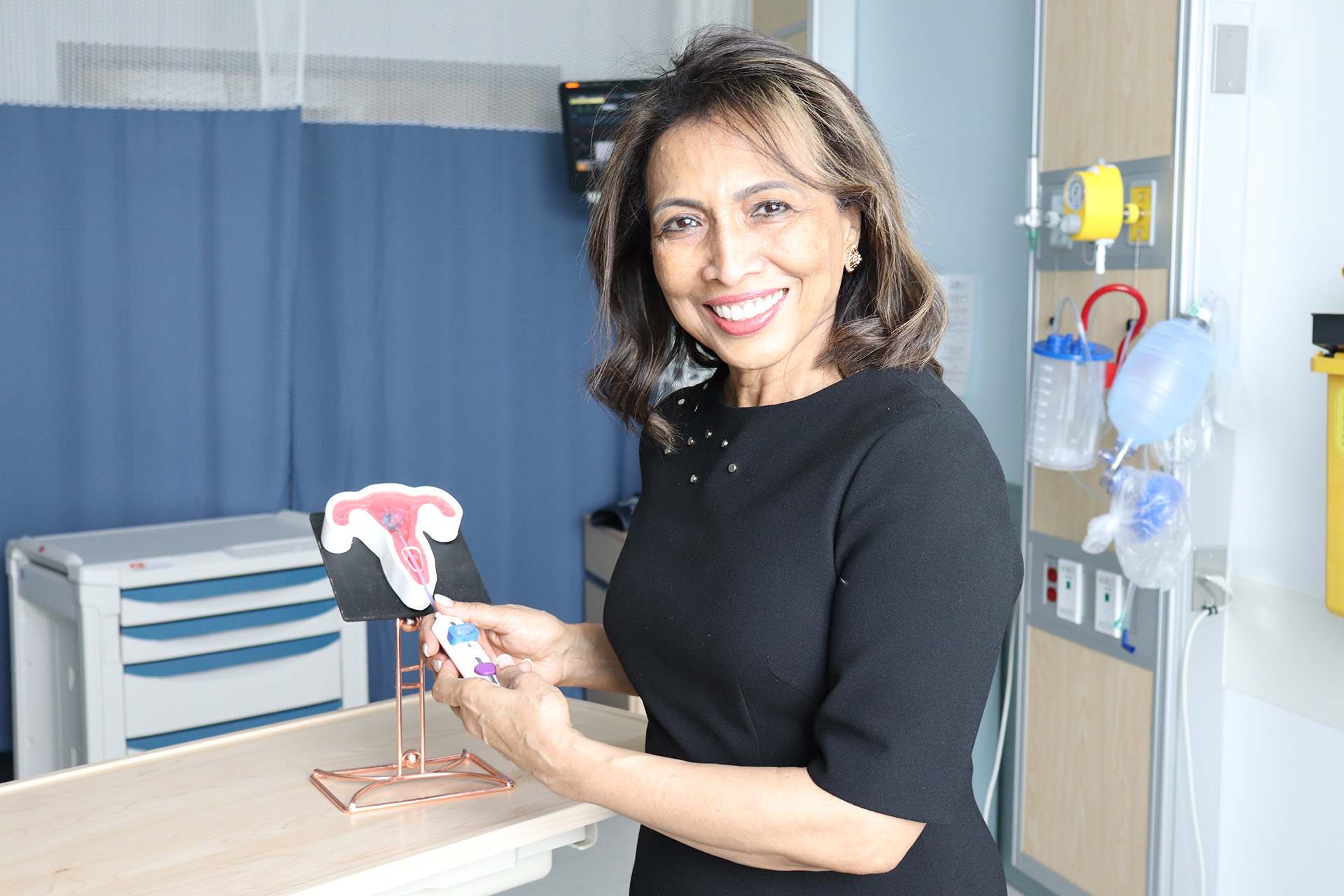 The McGill University Health Centre (MUHC) and its Research Institute (RI-MUHC) are pleased to announce that Dr. Lucy Gilbert’s research team will receive $ 6.24 million in Genomics Applications Partnership Program (GAPP) funding grant to finalize the development of DOvEEgene (Detecting Ovarian and Endometrial cancers Early using genomics)—a screening test that could save thousands of lives every year in Canada and millions of lives worldwide. The GAPP partners—Genome Canada, Genome Quebec and the MUHC Foundation—will contribute a third of the funds respectively to bring the DOvEEgene test through the final clinical trial needed for it to be implemented as a standard of care.

In collaboration with Optilab-MUHC, the research team, led by Dr. Gilbert, Director of the Gynecologic Oncology at the MUHC and Senior Investigator at the RI-MUHC, and her colleague Dr. Kris Jardon, also a gynecologist oncologist and investigator at the RI-MUHC, aim to deliver within the next few years a diagnostic test available to family doctors and gynecologists, which is capable of detecting more than 70 percent of early ovarian and endometrial cancers with a false positive rate near zero. Currently, there is no test that offers this level of accuracy.

“This forward thinking innovation could benefit women affected by these gynecologic cancers and reduce the burden on the healthcare system in treating advanced cancers. We also hope it can stimulate the Quebec and Canadian economy with a ‘Made in Canada’ invention”, says Dr. Bruce Mazer, Executive Director & Chief Scientific Officer (CSO) of the RI-MUHC (Interim).

Together, endometrial and ovarian cancers affect about 10,000 women in Canada every year and are responsible for more than 3,000 deaths. But despite escalating costs, cure rates associated with these cancers have not changed in 30 years. This is because most deaths are caused by the high-grade subtypes, which have no clear symptoms and continue to be diagnosed in Stages III and IV, when the cancer has silently metastasized outside gynecological organs to involve vital organs.

“DOvEEgene brings much hope because it is able to detect somatic mutations, which are early events in the development of cancer. Cure rates are over 80 percent in Stages I and II, when ovarian and endometrial cancers are diagnosed when the tumour is localized to gynecological organs”, says Dr. Gilbert, who is also a professor in the Departments of Obstetrics and Gynecology and of Oncology at McGill University.

DOvEEgene is one of eight Canadian projects awarded funding through the GAPP competition from Genome Canada (Round 16)—and recipient of the biggest award. GAPP funds downstream research and development (R&D) projects that address real world opportunities and challenges identified by industry, government, not-for-profits and other “Receptors” of genomics knowledge and technologies. GAPP projects are collaborations between academic researchers and Receptor organizations, and are co-funded by Genome Canada, Receptors and other stakeholders. Since the first GAPP competition in 2013, 33 projects have been funded in the health sector, and the amount granted to DOvEEgene is among the largest in the program’s history.

“Genome Quebec is extremely pleased to be a partner in this funding. After supporting the development of both fundamental and clinical research over the past 20 years, we have now reached the point where we contribute to projects that will become the standard of care” says Dr. Serge Marchand, Vice President of Scientific Affairs at Genome Quebec.

“With the support of Genome Canada, Genome Québec and our Foundation, Dr. Gilbert and her team at the MUHC and McGill University are one step closer to making the DOvEEgene test a standard of care. This test represents a major advancement in the early detection of ovarian and endometrial cancers, with the power to save the lives of countless women in Montreal, Quebec and across Canada,” adds Julie Quenneville, President, McGill University Health Centre Foundation.

Next steps: test validation and implementation

During the funded period of three years, DOvEEgene will first be offered in the Greater Montreal Area on a research basis, then to a wider population in Québec. At the end of this stage, the DOvEEgene diagnostic kit will be made available to gynecologists to offer women between 45 and 70 years. It will include:

The concept of a genomic pap test was developed initially by the Dr. Gilbert’s team in collaboration with researchers at Johns Hopkins University School of Medicine, in Baltimore, United States as PapSeek. The RI-MUHC and McGill University team* then improved on this concept to develop DOvEEgene, which uses a different mutation-capturing-technology -HaloplexHS, with next generation sequencing (NGS), to detect somatic mutations in 23 genes involved in ovarian and endometrial cancers, as well a novel machine-learning derived classifier. DOvEEgene is the only test able to differentiate these cancers from benign diseases common in women over 45 years. It is engineered to be specific, sensitive, clinician and patient-friendly, as well as affordable.

“We are fortunate to be the first molecular diagnostic lab in the world to test and apply this exciting new technology in a real life setting that will benefit at-risk women,” says Dr. Guy Rouleau, Director of The Neuro (Montreal Neurological Institute-Hospital) and Medical Director of the Molecular Genetics and Diagnostics laboratories at Optilab-MUHC.

“Our success in the discovery phase and the high likelihood of success with the validation and implementation of this test is largely due to the women who agreed to take part in research that provides no direct benefit to them. They do it because they are grateful to the healthcare system,” concludes Dr. Gilbert. “These benefits are uniquely Canadian and worth showcasing.”