A frequent injury in contact sports, concussions are not always easy to diagnose. Athletes can exhibit different signs or symptoms and may underreport their symptoms to remain “in the game”. This is especially true in hockey where players have to remove all their equipment to perform the standard balance assessment and then put it back on if they are cleared. For this reason, some hockey players may hide their symptoms and continue playing at the risk of their health.

Now, a team of researchers led by Dr. J. Scott Delaney, from the Department of Emergency Medicine at the McGill University Health Centre (MUHC), has made the first attempt at developing a balance test that could eventually be used in the concussion assessment of ice hockey players. They have created the in-skates balance error scoring system (SBESS) – a test that can be performed by ice hockey players with their full equipment (except for helmet and gloves) standing on the hard black rubber found in the hallways and dressing rooms of most arenas. The safety and reliability of the new SBESS assessment was evaluated in a study recently published in the Clinical Journal of Sport Medicine. More research is underway to demonstrate the test validity as a tool to diagnose concussions.

“Currently, the balance assessment is one of the most important physical exams after a possible concussion, and the most likely to pick up abnormalities, but it has to be done barefoot in shorts and a T-shirt. It’s not adapted to the reality of hockey players,” says Dr. Delaney, who is also a team physician for the Montreal Impact, Montreal Alouettes, McGill Football, McGill Men’s and Women’s soccer teams and Cirque du Soleil.

“Although there has been a great deal of progress among hockey players and coaches regarding concussions, there is still work to be done. Clearly, it is essential to remove a player who is exhibiting signs or symptoms of a concussion and evaluating them away from the field of play. The reality is that there are still some players who are reluctant to do the test, because of the fear that it takes them off the ice for too long,” adds Peter Smith, Head Coach McGill Martlet Hockey.

And yet, a concussion is a serious condition, which should not be left untreated. It is a brain injury characterized by an alteration in cerebral function caused by a direct or indirect acceleration–deceleration force transmitted to a freely mobile head. It can’t be seen on routine image scans, such as an MRI, X-ray or CT scan. It is usually diagnosed by observing changes in the way a person thinks and feels. Symptoms are diverse and can include dizziness, confusion, headache, blurry vision, feeling nervous, foggy or sad, fatigue and trouble with balance, among others.

A quick and easy assessment that works for all

“We designed the SBESS test to be quick and easy to perform with ice hockey players of all ages and levels, and to be as similar as possible to the traditional balance testing done after a concussion,” explains Dr. Delaney.

Eighty female and male university hockey players at McGill University and Concordia University were recruited in the study. Four stances were evaluated –all variations of the original three stances of the standard assessment– with the goal of removing the least reliable stance. The research team came up with three viable stances to be executed with eyes closed – the Stable, T-Shape and Toe-Point stances, as shown in Figure 1– that were shown to be safe, reproducible and not affected by fatigue or exhaustion.

No significant difference in error scores were observed between both attempts for the control group and for the experimental group.

The researchers also evaluated interraterreliability (consistency between raters) as well as intrarater (consistency of grading by a single rater) and found that both were very good and comparable to the commonly used assessment.

“This new research is an important step towards better management of brain injuries in hockey,” says Dr. Delaney.” We are now continuing the next phase of our research to demonstrate the validity of the SBESS test to diagnose concussions. We hope that our work leads to the adoption, over the next few years, of a new test to be added to the traditional physical exam that will help improve the diagnosis of concussions in hockey.” 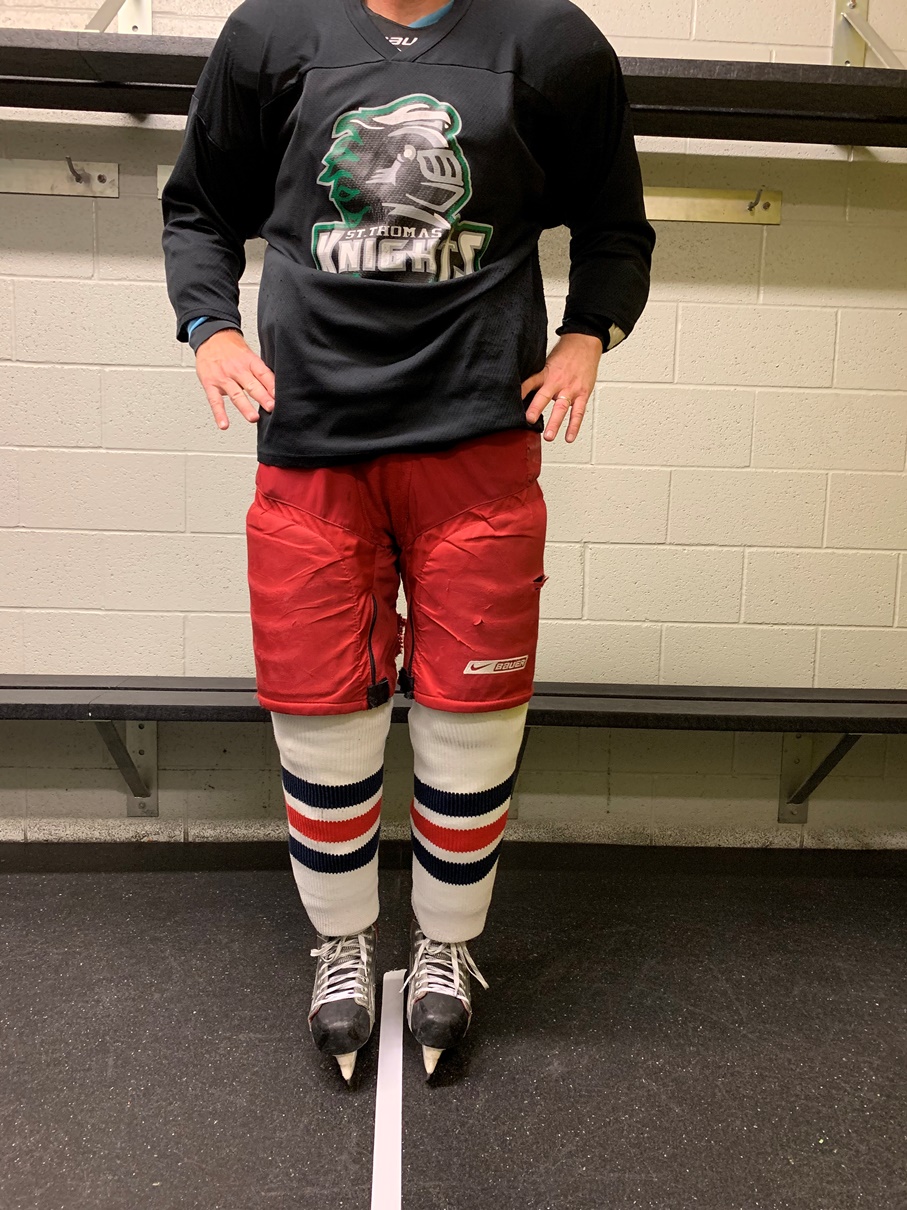 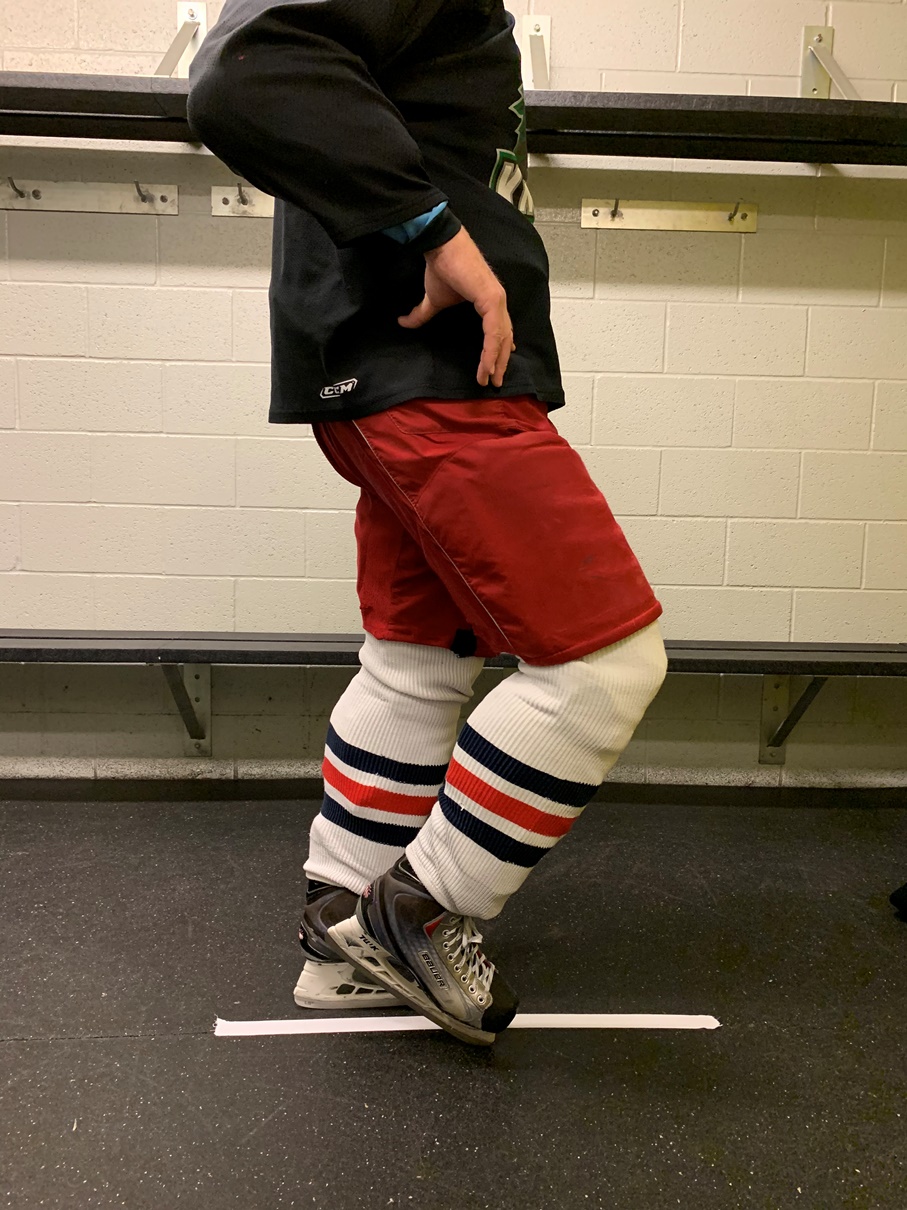 This stance requires a participant to be standing in the stable position and then pointing the toes of the dominant foot to the floor. 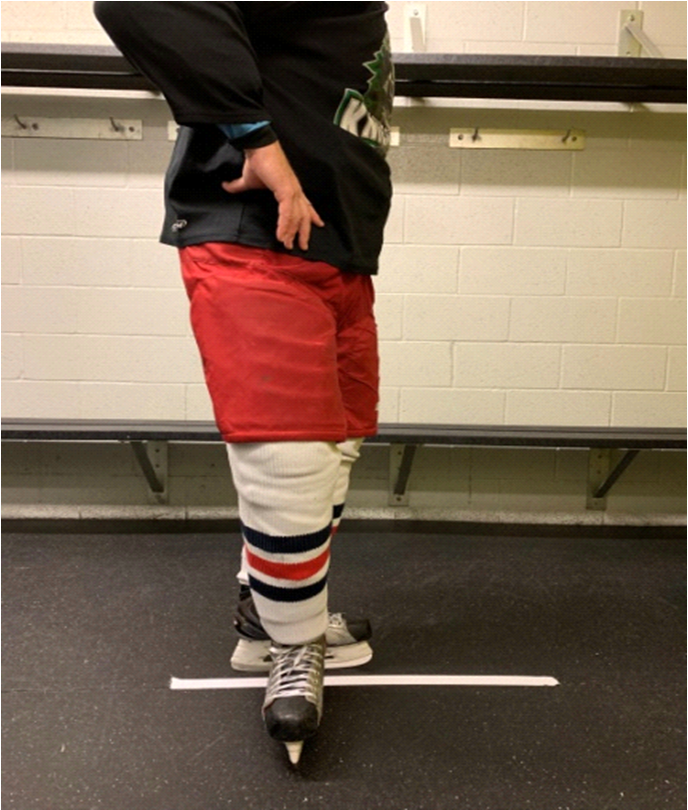 This stance requires the dominant skate to be positioned at right angle and at mid-position to the non-dominant skate.