Order of Canada is bestowed on Dr. Guy Rouleau

The Neuro’s director, Dr. Guy Rouleau, is being recognized with Canada’s highest civilian honour, the Order of Canada, for his outstanding contributions as a clinician-scientist and as a leader in health care.

In an announcement in Ottawa today, Her Excellency the Right Honourable Julie Payette, Governor General of Canada, named Dr. Rouleau to the rank of Officer, which underscores “national service or achievement”. Dr. Rouleau joins a list of distinguished Canadians from all walks of life whose contributions have helped shape the country and society in general. 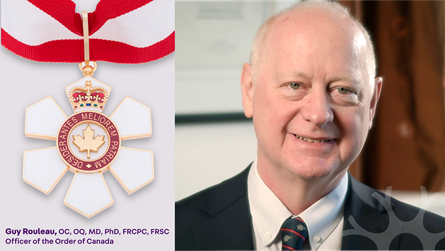 For over 30 years, his research has focused on finding the genetic causes underlying disease so that more effective treatments can be developed. He has helped to identify many disease-causing genes and clarified the mechanisms of gene mutations. As a clinician, he treats patients with genetic diseases and brain disorders. More recently, he has promoted the principles of Open Science research as a means of eliminating barriers to data sharing and accelerating discovery.

“Dr. Rouleau is among Canada’s most distinguished figures in medicine and healthcare and his induction into the Order of Canada is a fitting recognition of his accomplishments,” says Professor Suzanne Fortier, Principal of McGill University. “At McGill, we applaud his leadership at The Neuro and his championing of Open Science, which holds promise for accelerating research and improved treatments for disease. We extend our congratulations to him on this prestigious national honour.”

In dedicating his life’s work towards improving the means to diagnose and treat neurological diseases and disorders, Dr. Rouleau exemplifies the Order of Canada’s Latin motto: Desiderantes Meliorem Patriam (They desire a better country).

“I have tremendous respect for Dr. Rouleau and am pleased to express sincere congratulations to him on this richly-deserved honour on behalf of his colleagues at the MUHC,” adds Dr. Pierre Gfeller, the president and executive director of the MUHC. “Dr. Rouleau may juggle several leadership roles, but his focus never deviates from his core purpose and that is to make a positive impact on patients’ lives. This appointment to the Order of Canada reflects the respect his accomplishments have earned him here in Canada and internationally.”

McGill’s vice-principal (Health Affairs) and dean of the Faculty of Medicine and Health Sciences, Dr. David Eidelman, notes Dr. Rouleau’s international reputation as an expert in the genetic causes of diseases of the nervous system.

“He has made seminal discoveries in genetics research that have identified factors linked to diseases such as epilepsy, amyotrophic lateral sclerosis and schizophrenia. Moreover, his decision to pronounce The Neuro as an Open Science institution has inspired not only our University but the world science community to consider innovative ways of conducting and sharing research. Our Faculty is proud to have such a visionary among us.”

“I am delighted and honoured by my appointment to the Order of Canada,” says Dr. Rouleau. “As all countries around the globe cope with the COVID-19 pandemic, this award by the Government of Canada recognizes the fundamental role that science plays for society and how critical work of clinicians and researchers is to improve the health and well-being of our populations.”

Dr. Rouleau is the recipient of many other distinctions. Among these are the 2020 Canada Gairdner Wightman Award, the Michael Smith Award from the Canadian Institutes of Health Research, the Margolese National Brain Disorders Prize from the University of British Columbia, the Prix du Québec – Wilder Penfield from Quebec’s government and the Prix d’excellence of the Collège des médecins du Québec.

“Dr. Rouleau is one of Quebec’s most distinguished medical researchers. This latest honour bears witness to the far-reaching extent of his ground breaking work in genetics both at home and abroad,” says Dr. Rémi Quirion, the chief scientist of Québec. “As well as directing The Neuro, Dr. Rouleau is a world leader in promoting Open-Science basic and clinical research. All Quebecers can be proud of this remarkable scientist whose excellence is being recognized through bestowal of this honour. Welcome to the Order of Canada!”

Dr. Rouleau is the latest director of The Neuro to be named to the Order of Canada following Wilder Penfield, William Feindel and Donald Baxter, three luminaries in their own right whose legacies continue to inspire Canadians to help create a better country.