For the past 13 years, Michèle Desbiens has been battling a very rare type of stomach cancer known as a gastrointestinal stromal tumour or GIST. In 2002, she had surgery to remove the tumour at the Montreal General Hospital of the McGill University Health Centre (MGH-MUHC), but soon afterwards, she found out her cancer was metastatic (it can spread to other organs). Since then she has been undergoing targeted therapy. In December 2014, she had another setback: a breast cancer diagnosis. Desbiens tells us about her long and difficult but courageous journey and some memorable encounters with MUHC caregivers along the way.

How were you diagnosed?

MD: I consulted a family doctor for a vague stomach ache. An ultrasound revealed the presence of a tumour on the outer wall of the stomach. It was so big – 13 cm in diametre – that there was no time to do a biopsy. I needed surgery within six weeks. They had to act even more quickly because of significant bleeding, which meant there was a rupture. Dr. Gerald Fried operated on me at the Montreal General Hospital. They had to remove 30 per cent of the stomach and the spleen. 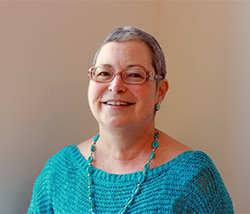 How did you learn it was a malignant tumour?

Dr. Fried came to see me in my hospital room after the surgery and told me I had GIST, a type of stomach cancer that is quite rare. He showed a great deal of sensitivity and humanity.

A month after your operation, you had to be hospitalized again for a postoperative complication. What happened?

I had an abscess in the abdomen. The radiologist Dr. Giovanni Artho drained it, but unfortunately the pus had crossed the diaphragm and was compressing my left lung. This time, it was the exceptional Dr. David Mulder who performed the operation. He peeled around the lung like an orange. The procedure, known as decortication of the lung, was much more painful than the first one. Those two surgeons saved my life. Dr. Fried called me his “star patient.”

After those first difficult times, you had to learn to live with your illness. How did that go?

You have to think of metastatic GIST as a chronic disease. For the past 12 years, I’ve been taking a drug to inhibit the protein that makes the cells multiply. In 2008, I had to undergo radiofrequency ablation for two lesions in the liver. I am being followed by the oncologist Dr. Thierry Alcindor. I like his calm manner, his expertise and his professionalism. He’s a great doctor.

In 2014, you were diagnosed with breast cancer.

Yes, it was in December 2014. Dr. Alcindor, who doesn’t treat breast cancer, wanted to treat me because I had to continue my treatment for GIST. He carefully checked the interactions of all my medications and therapies in collaboration with the oncology pharmacist. He has managed my illness impeccably.

Over the years, you have had some remarkable encounters with staff at the MUHC.

Yes, apart from my doctors, I was lucky to have “angels” along on my path. There was Pina, who supported me during my first stay of four weeks at the MGH. Before leaving my room, she made sure everything was within my reach. She was the one who comforted me when I was at the end of my rope.

I also remember a young medical student, Olivier, who came to visit me a few times. He arrived with a chocolate milk and a game of cards, and we chatted. He helped me dedramatize the situation and feel a bit better.

More recently, nurse Vanessa Palma was a great help in getting through 12 weeks of chemotherapy for breast cancer. She welcomed me with her wonderful smile and her willingness to listen and find solutions for my problems.

And finally, there’s kind “Tina,” Sestina Sacratini, who schedules appointments for treatments at the Cedars Cancer Centre. Always smiling, welcoming and ready to help us, she brightens our day.

I can say I have and I had the best care. I think I touched the hearts of certain people, and they touched mine. I thank them all.

The subtle symptoms of stomach cancer

Stomach cancer affects 3,500 Canadians each year and is usually diagnosed quite late. The main reason is that the symptoms can be mistaken for fairly common digestive disorders: indigestion, heartburn and vague abdominal pains.

"We don’t necessarily think of malignant disease when we have a stomach ache, for example. But if symptoms persist despite appropriate treatment, we have to push the investigation further,” explains Dr. Thierry Alcindor, oncologist-hematologist at the McGill University Health Centre, Gastro-Intestinal Disease site lead for the Rossy Cancer Network and associate professor of Oncology and Medicine at McGill University.

Adenocarcinoma represents about 80 per cent of stomach cancers. Infection with the bacteria Helicobacter pylori (responsible for ulcers), excessive alcohol consumption, tobacco use and regular consumption of pickled foods are among the main risk factors for the disease. Rarer types of stomach cancer, such as GIST, lymphoma or neuroendocrine tumours, occur in 10 to 15 per cent of cases and have no known risk factors.

In recent years, biologic therapies have been used in conjunction with standard treatments – surgery, chemotherapy and radiation – to increase the chances of recovery.

The MUHC is recognized as one of the main stomach cancer treatment centres in Canada, offering patients comprehensive services for diagnosis, treatment and access to clinical trials that enable them to benefit from advances in science.