The Pathology Team: behind every diagnosis at the MUHC

Over the span of one year, the Pathology team of the McGill University Health Centre (MUHC) examines 75,000 adult and 7,000 pediatric surgical specimens, as well as over 70,000 cytology specimens. More than 400 diagnoses are made every day.

A medical team often depends on the advice of a pathologist. Whether it is a dermatologist wondering if a skin lesion is melanoma or simply an unusual mole; a surgeon establishing the type and extent of a surgery required; an oncologist assessing the best treatment for a cancer diagnosis—they are all looking to the team of pathologists for a definitive answer.

While most patients do not meet their pathologist, pathologists may be involved in their care from before they were born (pre-natal screening for medical conditions), to old age. Pathologists also work in the autopsy room to determine the cause of death, the possibility of hereditary disease or even the effectiveness of certain treatments. 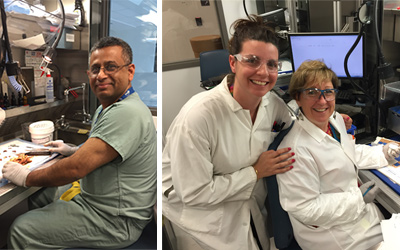 At the MUHC, there is a subspecialized team of 26 pathologists, who provide their expert opinion on each specimen submitted to the lab. They also provide consultation services to thousands of difficult cases referred from the rest of the province and across Canada. “Thanks to the IT team, we are now able to report each cancer using the College of American Pathologists synoptic checklist,” says Dr. Zu-hua Gao, MUHC pathologist-in-chief. “We also have the province’s best team of immunohistochemistry, FISH and special stains, which enables us to solve the mystery of some challenging and complicated cases.”

Each specimen that comes into the lab undergoes a rigorous identification process. “We must ensure that the specimen remains associated with the correct patient through a number of steps so that the right diagnosis is made for the right patient,” says Dr. Miriam Blumenkrantz, MUHC director of Quality Assurance in the Department of Pathology.

“And the diagnosis always has to be rapid as the clinicians and patients are anxiously waiting to hear from us so that they can make their therapeutic decision,” says Dr. Kevin Watters, assistant-chief of Pathology.

“At MUHC, we have introduced shift work and the lean concept in each step of our work flow,” adds Dr. Manon Auger, director of Cytopathology, which studies cells rather than tissues. “Because of the quality and efficiency of the team, our cytopathology service has become one of the referral centres for the province.”

“We have a great team, always doing the best they can to provide the highest quality of diagnosis for our patients,” says Marie Vachon, chief manager of the MUHC Pathology laboratory. 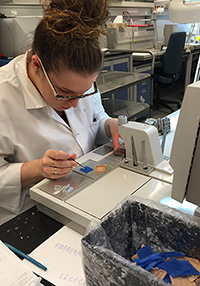 “The techs and pathologist assistants take the tissues and turn them into slides to be able to make the diagnosis. This involves fixing and cutting the tissue, placing it in wax, slicing the wax and then placing the thin slices onto slides that are stained to show the different features of the tissue under the microscope. All along everyone makes sure that everything is properly identified. Between the adult and pediatric specimens, we make about 300 000 wax blocks per year.”

Dr. Van-Hung Nguyen, another MUHC pathologist, stresses that everyone in the department from the Medical Secretaries to the Pathologists are equally important in thechain of events after the specimen arrives. 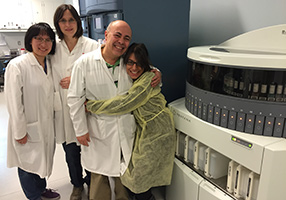 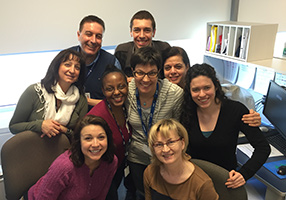 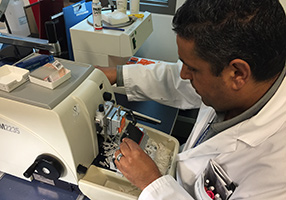 “Everyone has their role and without them, the end product is not possible, and therefore the diagnosis cannot be made,” says Dr. Nguyen.

According to MUHC Pathologist Dr. Badia Issa-Chergui, “our role does not stop at diagnosis. We also examine resected tumours to confirm diagnoses made on biopsies and to assess the extent of the disease and tumour margins, which are part of the cancer staging process guiding treatment. We review these findings at tumour boards, where we decide the next steps of patient care management.”

Problem solving in the Autopsy Room with team work and imagination

With any new construction, there is always a chance there will be a thing or two to alter once in the new space. This was the case for the autopsy room at the Glen of the McGill University Health Centre (MUHC). The room itself was great but there was a problem with the regular usage of the formaldehyde, which is required to fix organs that need examining.

Without a moment of hesitation, Louise Turcot, MUHC assistant-chief Medical Technologist of the Pathology Department, took the problem on. She quickly found out that going to an outside company for a solution would require big money that the department did not have, but by looking a little closer to home Louise found the answers she was looking for.

“I knew that if we had a pump of some sort to move the formaldehyde, which is toxic, from the container it came in to the bucket it had to go in it would do the job,” says Louise. “I eventually found a pump in an auto shop for $200 that was perfect. I then took this to Carlos Noriega in Biomedical Technology at the MUHC and he and his colleagues made the support system for the pump. We went from manually moving the toxic liquid that could splatter onto someone to using this new system that encloses the transfer of the formaldehyde, preventing any contamination.”

According to Carlos, they often come up with engineering solutions to issues by using in-house material that is no longer required by another department and in-house expertise. The dynamic duo also found a safer way to dispose of the formaldehyde until the new system is implemented.