The scene was ripped right out of a parent’s worst nightmare. Imagine being thousands of miles away from home with a child in respiratory distress, with no access to the machine that helps them breathe. This was a reality for Isabelle Boudreault and her six-year-old daughter Arielle, who lives with Spinal Muscular Atrophy (SMA).

Arielle has been receiving treatment for her SMA at the Montreal Children’s Hospital of the McGill University Health Centre (MUHC) for the past six years. SMA is a degenerative condition that affects the control of the muscles, and has an impact on everyday muscle functions such as breathing, walking, and talking. 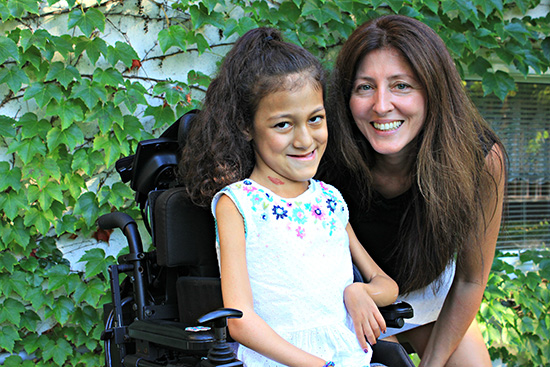 In addition to her hospital stays and follow-ups, for the past five years Arielle has also been a patient with the MUHC’s National Program for Home Ventilatory Assistance (NPHVA). Respiratory therapists with the NPHVA play a key role in ensuring patients in and out of hospital can properly manage their breathing, allowing them to live autonomously.

In order to control her breathing, Arielle must use a BIPAP machine. It is one step up from a CPAP machine, which is typically used for sleep apnea. The machine pushes air through the lungs, acting as a breathing aid.

Because Isabelle refuses to let Arielle’s illness get in her way of living, this past summer the two of them visited family in Spain. But what was meant to be a relaxing family vacation took a different turn when Arielle told her mother she wasn’t feeling well.

“She told me ‘Mommy, my heart is going so fast,’” Isabelle recalls.

The two were in their hotel room, getting ready to meet with Isabelle’s brother at the Barcelona airport to catch a short flight to Mallorca. Isabelle left the hotel with Arielle hooked up to her BiPAP machine, believing the situation was under control. Her condition grew worse at the airport, and the situation grew much more complicated.

“At the airport, the BiPAP just went ‘POOF!’” Isabelle says, imitating the sound of the tired machine. “It stopped working completely. And I was telling myself that we have no choice, she was in respiratory distress, we need to take her to the hospital.”

Arielle’s breathing quickly stabilized at the hospital, but this still did not fix the issue. Arielle would not be able to go far without her BiPAP. 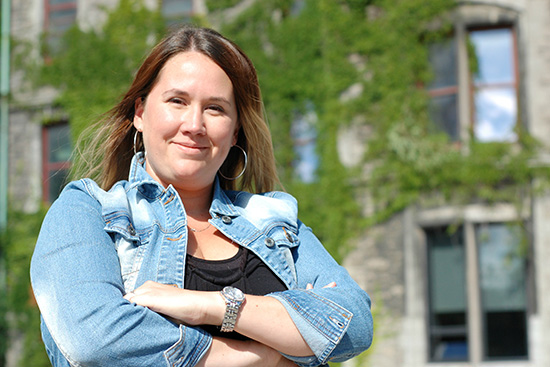 This is where the MUHC and the care of Respiratory Therapist Alexandra Plamondon came into play. Alexandra was on call when the incident occurred.

“My first thought was to contact NPHVA because they answer all the time, so I knew they'd help me find a solution,” says Isabelle.

My first thought was to contact NPHVA because they answer all the time, so I knew they'd help me find a solution — Isabelle Boudreault

Alexandra and Isabelle made contact, and the first step was troubleshooting over the phone. It quickly became clear that the machine was a lost cause, and the next step was to get Arielle a new, functioning BiPAP—no matter what.

From that point on Alexandra dove into a game of complicated logistics, including getting the proper paper work from doctors, and ensuring the machine was being shipped with enough information for customs officers.

At the time, Isabelle was relieved to see how quick the issue was being solved; Alexandra got a new machine to her parents in Montreal who were then shipping it to Spain. Then came yet another road block.

“The problem we had was that the customs in Spain didn't want to let the machine clear,” Isabelle explains.

Back at the MUHC, Alexandra, who was in contact with both Isabelle in Spain and family in Montreal, was also in contact with the company that manufactures the machine, and their subsidiary company in Spain. She ensured that a machine with the right parameters would reach Isabelle and Arielle in the meantime.

“Finally, they ended up with two working machines, so at least they were able to spend the rest of their vacations at ease,” says Alexandra. “Situations like these are never easy. To do one’s job over a long distance adds a layer of complexity to the mix; in this case everything from shipping issues to language barriers came into play.”

But despite not being Arielle’s regular respiratory therapist, throughout it all she felt a strong connection to the situation, being a mother herself.

“I was putting myself in their place, and was like ‘ok, if one of my sons was sick, and we would be far from home, well I wish somebody would take the time to find everything I need,’” she explains.

This empathy, professionalism, and expertise are why Isabelle says her experience solidified her trust in the NPHVA team and the MUHC.

The role of a respiratory therapist is not very well known to the general public, but for patients like Arielle who have benefited from their care, it makes all the difference.

“We’re proud of our job; we enjoy what we're doing. We're a good team, and we all work in the same direction,” says Alexandra, “which is working so that patients are stable and at home. We're trying to prevent them from getting sick and returning to the hospital.”

Therapists work with a variety of patients both in and outside of the hospital, from neuromuscular disease patients to those living with chronic diseases that affect their breathing. Alexandra says that the work she and her colleagues do helps provide comfort. The therapists provide regular home visits, as well as a 24/7 on-call service. It allows patients to get the treatment and aid they need in their own homes, creates a sense of empowerment, and improves quality of life.

Isabelle can attest to the agency and autonomy acquired through the therapy. Arielle is going on seven-years-old in October, and while her mother says she has her restrictions, she continues to lead a happy, healthy life.

“It's not like she's just surviving or getting by, she's actually living a full life,” she says. “Arielle's living proof that the therapy works.”

For more information on the National Program for Home Ventilatory Assistance, visit: http://www.pnavd.ca/

The BCG World Atlas: a world first in the fight against tuberculosis