Losing and regaining speech without losing her smile

Angela Burlton’s life changed dramatically after she was diagnosed with vocal cord cancer in 2012, but she never let her diagnosis get in the way of leading her life the way she wanted.

“It was important not to allow illness to overwhelm me,” says Angela. “To develop a mindset of resilience, and to remember that there were still things that I could enjoy and that would be comforting.”

One could even say that today, after undergoing a laryngectomy – removal of the larynx, including the vocal cords and Adam's apple – and four other surgeries at the McGill university Health Centre (MUHC), she lives her life with the same commitment that contributed to the success in her professional life. 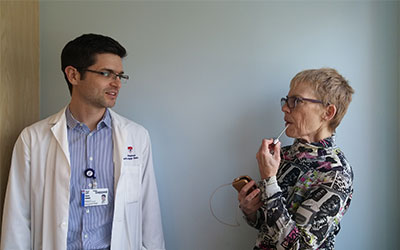 “I do not want to minimize the devastating impact of such a diagnosis, but I think one must try to create positive experiences and not only fixate illness,” says this curious, cheerful and determined woman.

"I used to spend a lot of time at work," says the former business woman, professor of Entrepreneurship at McGill University and consultant, who was also involved in several non-profit organizations. “However, since my last surgery in August 2014, I’ve been investing my energy in my recovery and rehabilitation to regain the use of speech.”

Learning to talk after a laryngectomy

"A laryngectomy consists of the removal of the larynx and the creation of a stoma (a hole in the throat) for breathing, necessary because the mouth and nose are not connected to the lungs anymore," explains Jesse Burns, a speech-language pathologist at the MUHC. "Moreover, patients no longer have a voice when the vocal cords are removed and must learn to communicate differently."

To regain the use of speech, three options are possible:

"At the MUHC, we favor the installation of a tracheo-esophageal prosthesis," says Jesse. "However, because Angela had five surgeries and complications between 2012 and 2014, it was not possible to install one until recently."

Angela, who was followed from the beginning by Dr Karen Kost, MUHC otolaryngologist and ENT surgeon, learned to speak with an artificial larynx and also with an esophageal voice. 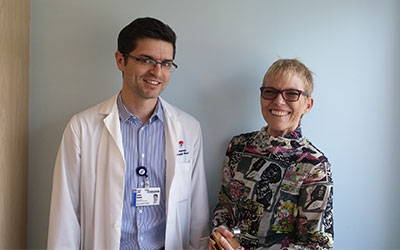 This was not an easy journey for Angela. In addition to becoming familiar with these new ways of speaking, she had to overcome the trauma of losing her voice, repeated surgeries to deal with complications, and she had to get used to being noticed in public when speaking.

“The artificial larynx sounds like a robot, but it allowed me to communicate,” says Angela.

"It’s easy to isolate ourselves when faced with such challenges and when communicating demands so much effort and rehabilitation. But there is a real danger because isolation easily leads to depression... This is why we must resist and move ahead."

Building a new social network was central to Angela’s recovery. She also had to say goodbye to teaching, but says she now observes, listens and learns a lot. For instance, she recently learned how to stimulate her sense of smell, which she thought had disappeared.

"This is a period of discovery, and in that sense, it's stimulating. I have more opportunity to explore new pursuits than when I was working long hours. We must accept to let go of some things to discover new ones.”

“Fortunately, I am well surrounded—I have a partner, family, friends and an extraordinary clinical team who are all very supportive. But I must say that when I have a problem, I call Jesse: he’s empathetic, knowledgeable and more accessible than the doctors,” she says with a touch of humour. “I’m also lucky not to have any other stresses. It makes a big difference when you can devote your energy to improving your health."

Recently, Angela was finally able to get a prosthesis, which gives her a stronger and more natural voice. "For me, recovering a good quality of oral communication was absolutely essential—a huge breakthrough. Now I feel like I have my voice back, even if it is not exactly the same as it was before," she says. "Jesse helped me a lot to get there, and I am very grateful."

Angela is now focused on her physical well-being: building stamina, flexibility and strength. She sometimes visits MUHC patients who face the same challenge of worrying about their illness and relearning to talk.

"When I meet with patients who are preparing for their surgery, I can share my experiences with them and how it has worked out for me in spite of a somewhat rocky start,” she says. “I was lucky.  No life is without challenges, and there are no guarantees, but a positive attitude certainly helped me to learn to deal with this adversity and to find other satisfying pursuits. Not too shabby, I think.”

“Talk is the “main ingredient” in health care. Even the technical side of medicine depends on being able to talk to the affected person.” (Roter and Hall, 1993).

There are over 100,000 Canadians living with aphasia today, a language problem that masks a person’s inherent competence to participate in a conversation as well as the ability to read and write. One in three stroke survivors are diagnosed with aphasia.

Recognizing the importance of communication, The Canadian Best Practice Recommendations for Stroke Care now recommend that all healthcare professionals working with aphasic patients be trained in Supported Conversation for Adults with AphasiaTM (SCATM), an evidence-based caregiver communication training program.

The two goals of SCATM are to increase:

With these goals in mind, certified Speech-language pathologists of the MUHC (adult sites) have begun to train hospital personnel on our stroke units in SCA. The two-hour workshop is a hands on experience on how to better convey your message, how to help your patient getting their message out and on verifying that you understood. The principles of SCATM can also be applied with patients who do not speak the same language as you, who do not hear well, who have cognitive deficits, etc.