Valentine’s Day is all about love, and love comes in many forms. Love that helps those navigate illness is pure, all-consuming, and powerful. The walls of the McGill University Health Centre (MUHC) are filled with beautiful stories of resilience, compassion, empathy, and love..

The Silver family: sticking together through thick and thin

Siblings Tracey and Steven, and their mother Carol Silver, reminisce on the many family dinners and road trips they shared as they sit in the recreational room at MUHC’s Pavilion Camille-Lefebvre of Lachine Hospital. 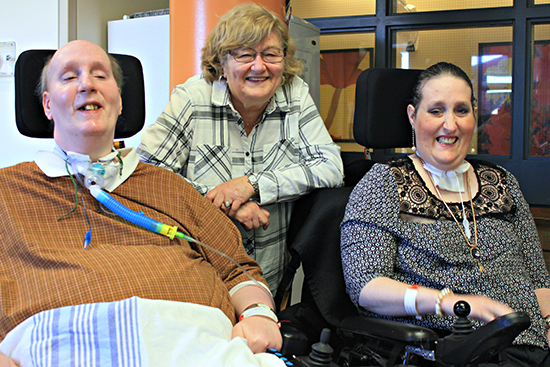 Carol visits her son and daughter four times a week. Tracey and Steven have been residents at Camille-Lefebvre for the past two years, since moving there from the MUHC’s Montreal Chest Institute. The brother and sister, 53 and 46 respectively, were both diagnosed with Myotonic dystrophy in their 30’s, shortly after their father died of the same illness.

Myotonic dystrophy (MD) is genetic, and one of the nine different muscular dystrophies. It’s the most common of the dystrophies that is diagnosed in adults, and causes muscle weakness and wasting.

Tracey and Steven are very much a team as they navigate life with MD. For Tracey and Steven, MD has affected their ability to walk and breathe. But this has not dulled their character or spirit. An aura of kindness, strength, and comfort surrounds the entire family.

“I’m a very sociable person, I say hello to everyone, I’m always ready to have a conversation and get to know people,” Tracey says.

“Steven’s shyer,” Carol adds “But he’s come out of his shell a lot since he has been here at Lachine, and Tracey helps because she introduces him to people.” 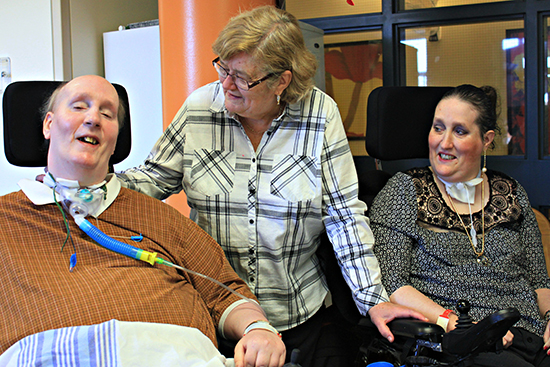 Like many siblings, the two have different personalities, and they play off of each other.

“She helps me and I help her, we’re brother and sister, that’s just what we do,” Steven says.

Tracey and Steven spend their time socializing, watching TV, and taking part in the vast array of recreational activities at Lachine. When Carol visits, the three of them take the time to sit and talk, simply enjoying each other’s company. They also go on outings together, most recently having been to Place des Arts to see a play version of “Dirty Dancing,” a favorite of Tracey’s.

“When my mom isn’t here to visit, I call her,” Tracey laughs.

Carol says that she needs her children as much as they need her; they are a team, a family who sticks together through it all.

However, Carol doesn’t stop there; she’s become a friendly visitor for the residents at Lachine. She’s always ensuring that everyone has someone to talk to, someone visiting them, and often brings treats for patients.

“I think it gives you a compassion for others. If my kids didn’t have me, I would want someone to smile and ask them how they are, to check on them. So I like to do it for others because we’re all going to be in the same boat at some point… I’m getting old myself,” she laughs.

“She has a very good heart,” Steven says of his mother.

The Silver’s embody what it is to be a family, what it is to feed off of the love and support of siblings, and the healing and comforting power of the unconditional love of a mother.

“It really helps to have her come visit, the companionship gets you through the day,” Tracey says. 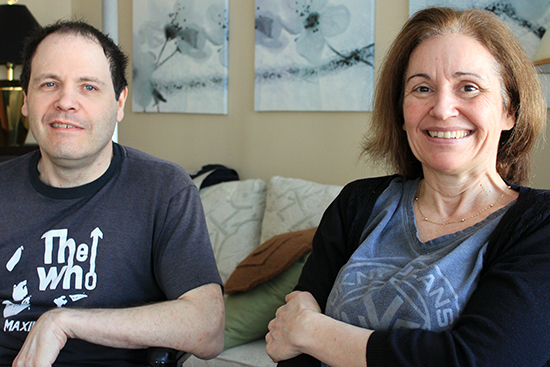 “I got her number, and phoned her up a couple of days later,” Robert says, recalling the moment he called Anne for the first time.

“He made me wait!” she interjects.

Robert Roy and Anne Dubé laugh as they reminisce on how they first connected 18 years ago.

Today they share a love as deep as the understanding of the disease they both live with: Multiple Sclerosis (MS).

Robert very clearly recalls the phone call he shared with his best friend in 1999.

“My friend called me up, and he was like ‘I got a girl for you, she's got MS like you, and it could be interesting. My best friend had a girlfriend, and her sister was Anne's neighbour.”

Robert phoned Anne, and the two of them immediately began comparing notes. They shared their experiences with MS, their backgrounds, and what they had been through. It was cathartic.

Anne and Robert were diagnosed with MS in 1986, when they were both in their early 20s. MS is a disease that manifests itself differently depending on the type and person, and as Robert explains, his progressed much slower than Anne’s.

The couple recall their first date at a restaurant. The connection between the two of them was instantaneous.

“There was no hiding of our problem, which is a reflex when you meet someone for the first time. It's not something you want to talk about. But for both of us, it was easy to relate,” Robert explains.

“We just understood each other,” Anne adds. 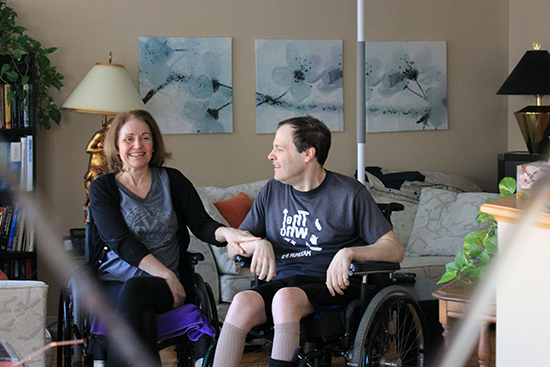 With time, the companionship and connection drew them closer together, and in 2000 they were ready to make the next step and move in together in Montreal.

Robert says that they were synchronised from the start.

“And she’s not,” he jokes. “But really, we’re just always in a good mood together. There’s nothing that she does that drives me up the wall,” Robert says.

The couple, who are both followed by Montreal Neurological Institute and Hospital Neurologist Dr. Jack Antel, take their appointments together.

“Anne shakes a lot; she has minimal use of her hands. But she's very strong in the lower torso. I don't shake, but I am weak in the legs. So this is where the balance kicks in,” Robert explains.

Robert calls himself Anne’s “walker,” because she uses Robert’s wheelchair for support when the two of them go in for check-ups.

“Many times when we go to the Neuro either a nurse or a doctor will say, ‘Wow! You really complement each other, a match made in heaven,’” Robert says, laughing at how cliché it sounds.

During their free time, the couple enjoy watching television and spending time in each other’s company.

A major contributing factor to their happiness is the feeling of always having someone to talk to, openly and unfiltered. Living with MS can be emotionally, mentally, and physically draining, and being partners allows them to tackle it together.

“If I’m being honest, when you live with a handicap, finding someone is like a casino shot. When you find someone I think you appreciate it even more,” Robert says. “The major thing we have in common is we truly and deeply understand each other.” 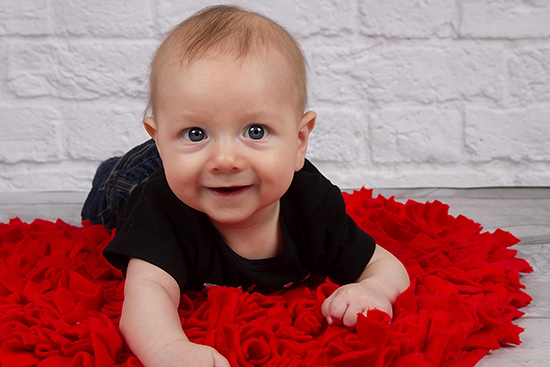 No parent ever expects to hear that their newborn baby’s heart needs mending. But during a routine doctor’s appointment in the fall of 2016, Nadia Carpini discovered her two-week old baby boy had a heart murmur, and time stood still.

Just days later, she and her husband found themselves at the Montreal Children’s Hospital of the MUHC, where their newborn would undergo heart surgery to repair a severe coarctation of his aorta at just 19 days old. The experience, she says, was heartbreaking and overwhelming. The only way forward was to rely on her husband and family members for support to get through it.

“I chose to stay with Jazper while he was in the hospital, but it meant that I had to be away from my two other children and my husband. It was a heart wrenching decision to make, even if we did our best to stay in touch and keep as normal a routine as possible,” she explains. “There’s no way we would have gotten through this experience had it not been for my mother, my husband’s parents and our siblings coming together to take care of our other children and to support us.”

With Jazper now having fully recovered from surgery and having made the transition home from the hospital, Nadia says she can now process everything that’s happened with the support and listening ear of her husband.

“It’s so helpful to have someone else to talk to about things that were too overwhelming to process in the moment, and to just have a shoulder to cry on when I need it,” she says. “The entire experience made me reflect about what I love about each of my children and what makes each of them unique and special. I remember wondering when I was pregnant after having my first child if I could ever love another baby like my first. I quickly learned that as a mother, you have so much room in your heart.”

To highlight their first Valentine’s Day together as a family of five, Nadia recently organized a photoshoot to have their first professional photos taken of Jazper. “It’s really full circle for us,” she says. “Valentine’s Day is about the heart, and Jazper’s was so sick. We’re so glad to be able to celebrate this with him.”

Living the good life at 78

Q & A with our experts - Dr. Stéphane Rinfret, cardiologist