Joanna, master of her destiny

Joanna Felemegos is a smart, soft-spoken 26 year-old who has overcome quite a few hurdles in life. She has sickle cell beta-thalassemia disease, a lifelong condition that causes anemia and episodes of intense pain that start suddenly and can last for days. With the help of her family and healthcare teams at the McGill University Health Centre (MUHC), Joanna has been able to manage her health, finish her studies and become a promising young professional.

When Joanna was born, her parents were happy, but also anxious. Their baby could have sickle cell disease (SCD), also known as sickle cell anemia—a hereditary blood disorder where abnormal hemoglobin causes red blood cells to become rigid and deformed, so they look like a sickle used to cut wheat. Joanna’s mother, Julie Drakoulakou, is a carrier of the sickle cell gene, and her father is a carrier of the thalassemia trait, another type of inherited anemia commonly found around the Mediterranean region.

“Before we got married, our family doctor told us there was nothing to worry about, because these were two different kinds of genes,” says Julie. “But when I became pregnant, my obstetrician said the baby could indeed have sickle cell anemia, so she sent me for genetic counselling. They told me an amniocentesis would show if the foetus had SCD, but I refused the procedure because of the risks associated with it.” 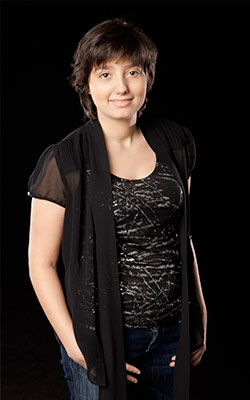 Julie and her husband had to wait until Joanna was three months old to have her tested. Until that age, babies are protected by their fetal hemoglobin. When the results came in, the couple was devastated. “I had read that many children didn’t survive beyond their teenage years,” she says. “But soon after Joanna’s birth we met an older patient with SCD and this gave us hope.”

“SCD is associated with many complications and related symptoms,” says Dr. Warner. “Sickled red blood cells have a shorter lifespan and because of their shape, have more difficulty circulating through blood vessels, so most patients are anemic. More importantly, the abnormally shaped red blood cells hinder the flow of blood through small blood vessels leading to impaired oxygen delivery to tissues. This can cause attacks of severe pain in bones and muscles (pain crises) – which vary in terms of number and frequency according to the patient – and damage to many vital organs, leading to risks of stroke, pulmonary hypertension and kidney damage, among others. Patients often need strong painkillers for pain crises and sometimes, hospitalization.”

As an infant, Joanna took antibiotics to avoid life-threatening infections and before she turned ten, she had her gallbladder removed. A bile duct was blocked with bilirubin stones that are formed when red blood cells break down.

Joanna typically had pain crises three to four times per year that lasted about a week at a time. “When I was in school, I would get sick for days, miss class and then fall back,” she says. “And I couldn’t do as much gym as I would have liked to.”

Joanna learned that her crises can be triggered by stress and cold temperatures. “For this, I do yoga and meditate and I remind myself not to stress out, ” she says. “And if the temperature drops, and I think I’ll get a crisis, I take pain medication, drink a lot of water to keep my blood fluid and I stay warm.”

According to Dr. Warner, many patients living with SCD face significant challenges.

“Pain episodes tend to be recurrent, and their onset unpredictable, so patients have difficulty attending school or going to work regularly,” she explains. “They can also feel helpless and sometimes misunderstood. As there are often no objective physical findings or laboratory tests to confirm a pain crisis, some physicians have difficulty understanding the urgent need for appropriate pain medication. On occasion this can lead to delays in proper treatment and misunderstandings between the patient and treating medical team. As awareness about this disease increases, this should improve.”

For the past 20 years, Julie, who is a dentist, has been giving lectures about SCD to third-year dental students from McGill University. “It’s important to educate students about the need to get a detailed medical history of patients,” she says. “Certain diseases, like sickle cell disease, require the use of prophylactic antibiotics before dental procedures. The fact that I use Joanna’s story touches them and makes it easier for them to remember.”

Joanna recently became a notary. Little by little, she learned that life with SCD is manageable if she respects her limits. “Every pain crisis taught me something about my body and made it easier for me to cope with,” she says. “And I have a great family and medical team always there to support me.” 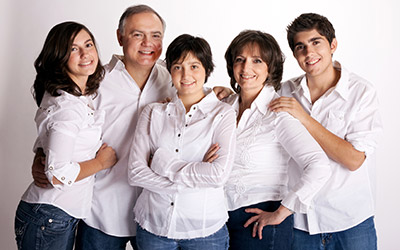 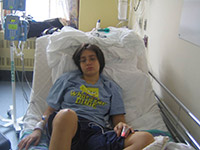 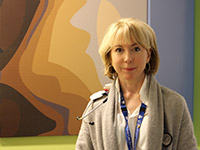 Founded in 2000, the McGill University Health Centre (MUHC) Hemoglobinopathies Clinic is one of only two in Quebec offering comprehensive, highly specialized care to adult patients with sickle cell disease (SCD) and thalassemia. The clinic strives to offer patients and families counselling and treatment for best maintenance of health and hopefully avoidance of long-term complications.  The number of people affected by hemoglobin disorders in Canada is unknown, but the number of patients seen in the clinic is growing rapidly due to population growth and immigration. The condition is most common among people whose ancestors come from Africa, the Mediterranean, the Arabian Peninsula, South and Central America and parts of the Caribbean.

“It’s important to identify carriers from high risk populations and give appropriate counselling to couples who may be at risk of having a child with SCD,” says Dr. Molly Warner, chief of Hematology at the MUHC and founder of the clinic. “Since 2013, universal newborn screening for sickle cell disease has been implemented for babies born in the Montreal and surrounding regions. We hope to have province-wide newborn screening available soon, similar to many other jurisdictions where it is already common practice. A dedicated group of specialists is working on this program for Quebec.”

At the clinic, a core team of three hematologists (Drs. Warner, Veronique Naessens and Patricia Pelletier) and a dedicated hemoglobinopathies, nurse (Catherine Sabourin), care for more than 200 sickle cell and thalassemia patients. Furthermore, many other MUHC specially trained nurses care for patients at the Glen site.

My Tool Box: ―a treasure chest of benefits for chronic disease self-management