The instrumental role of musical therapy

Music has proven to be a powerful medium throughout the history of humankind. The sounds of the guitar, drums, and piano paired with striking vocals have spearheaded revolutions. They’ve brought people together in the streets, in dimly lit concert venues, and even in the family living room. Music heals, soothes, and comforts. It’s this powerful expression through music that Lachine Hospital long-term care patient Hans Stutz knows very well.

Hans has been a man of sound for many years. The 48-year-old began taking guitar lessons at the age of 16, and his love and ear for music grew and grew. A musician in three different bands, he is not one to discriminate against genres, loving everything from rock and roll to funk and reggae.

Life took an unexpected turn in 2011, when Hans was diagnosed with thymus cancer. It’s a rare form of cancer that affects the mediastinum. This is the space that can be found between the lungs, and it also houses the trachea, esophagus, and the heart. The thymus itself is located just above the heart. For Hans, the illness took a massive toll on his body. 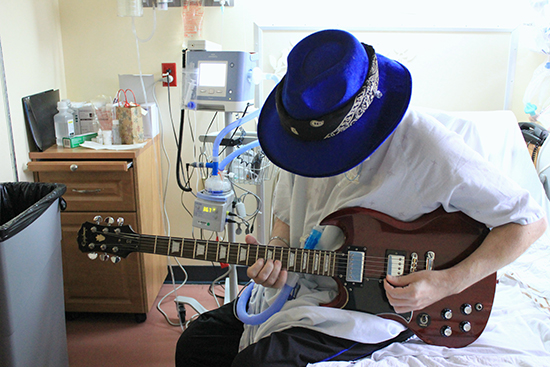 After many complications and a continued uphill battle against the disease, Hans came to the McGill University Health Centre’s (MUHC) Pavilion Camille-Lefebvre of Lachine Hospital in October of 2016. He currently lives in the long-term-care Respiratory Unit. His voice is faint, and he uses a whiteboard to communicate, but his personality and love for music is anything but mum. Upon his arrival at Lachine, he met accredited music therapist, Joanie Ayotte. The two began to work together, playing music and prepping songs for a mini Holiday concert for patients.

Joanie began working in the leisure department for the MUHC while working towards her degree in social work six years ago. Her musical background and talent came into play, and she went on to receive a Graduate certificate in Music Therapy at Concordia University. She spends her time working with elderly patients and those in palliative care. She says that every patient has individual needs, and music, as a medium, is flexible enough to meet them.

“Music therapy provides an experience that is diversified,” she explains. “Through music, patients can express their creativity and individuality.” 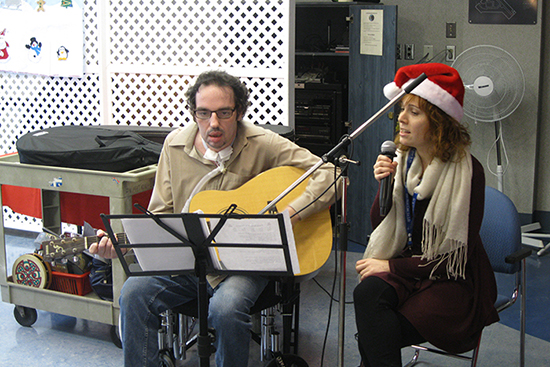 For Hans, the chance to perform for a crowd after such a long time was refreshing.

“The experience allowed me to give joy to the other patients,” he says.

Music can heal in more ways than one. It’s not a prescription drug, nor is it a revolutionary lifesaving treatment. It plays a role and function that medicine and science cannot; it feeds the soul, and cocoons those playing and listening.

Through her work, Joanie’s has seen the ability music has to nurture self-esteem and self-expression.

“A sense of belonging gets created. Music allows people to break the isolation and overcome a lot of negative emotions.”

Following their Holiday concert success, Joanie and Hans are jumping into their next project. They are working on an original composition, combining their musical talents and backgrounds to create something unique, special, and nurturing.

To the beat of music therapy at the MGH