To the beat of music therapy at the MGH

New initiatives set the tone for the adult psychiatric service

People in a circle playing the percussions. A patient relaxing while listening to a reading list. A choir that performs original compositions by patients in concert. How can these activities be summarized in one word?

By definition, music therapy is the use of music in a healing process. Music, used in all its aspects by professional therapists, has the gift of healing. This form of treatment already existed during the Second World War, when some doctors would relieve wounded or traumatized soldiers with music. Today, music is used to help mental health patients open up emotionally and express themselves, which helps the patient's journey through their regular therapies.

A range of music therapy treatments at the MGH

At the Adult Psychiatry Department of the Montreal General Hospital (MGH), music is used in all its aspects. Music therapist Dany Bouchard has been providing medical care based on the use of music and sound since 2006.

There are many music therapy activities at the MGH: "We hold individual and group sessions with mental health patients (inpatient unit and outpatient clinics); there is, of course, the choir Le groupe MusiArt which has existed for 20 years and which since last year, has a recording studio - the first of its kind in Canada located in a hospital centre," Dany says. "And we have just purchased new guitars and two handpan drums with the help of a fundraiser organized by the Montreal General Hospital Foundation. Patients will love it! " 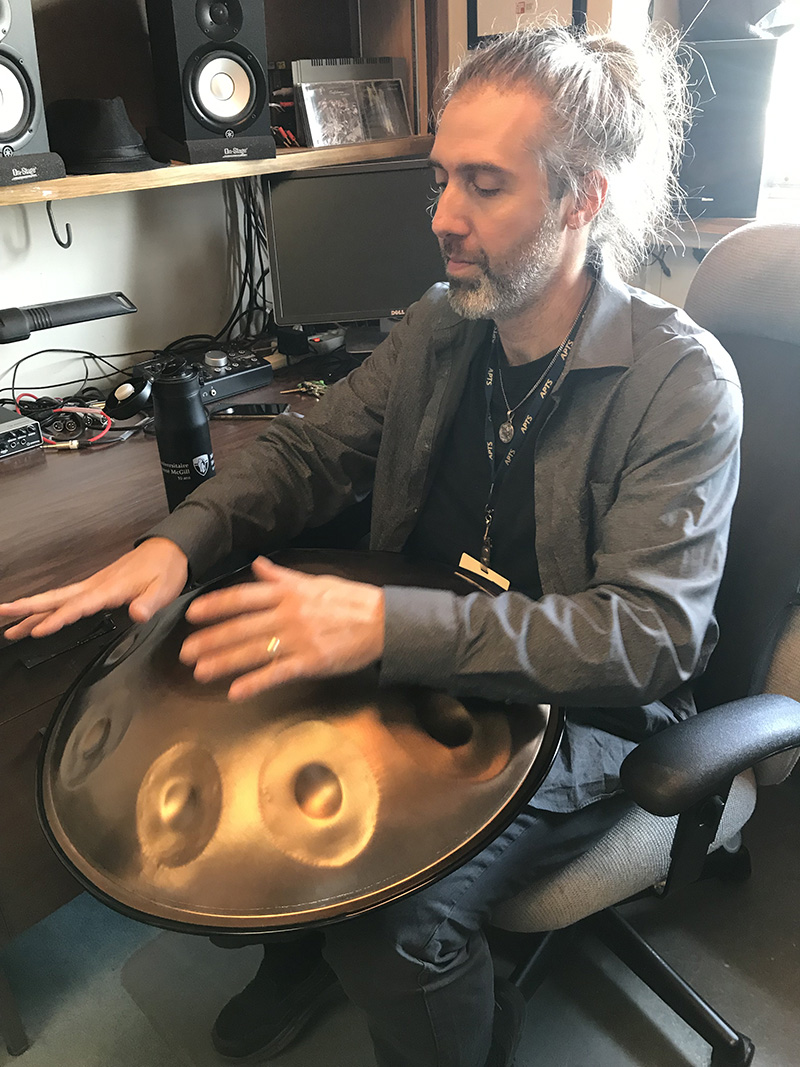 But Dany doesn't stop there. He is currently working on the launch of the MAP (Montage Audio Personnalisé) method or Custom Audio Editing. "The MAP method has been used since 2016 at Hôpital Ste-Justine with good results. I expect no less for our own patients in the Mental Health Mission.”

Custom audio editing is usually done in four meetings. During the first meeting, called the receptive assessment, the patient listens and chooses musical pieces with the help of the music therapist.

"It's like setting up a listening list," Dany explains. "Each montage, which lasts from 12 to 16 minutes, is composed of about 8 instrumental musical extracts (without words). As the meetings progress, the patient refines each montage - it is as if the patient were composing a personalized musical prescription. There are three possible options: soothing, energizing and falling asleep. The patient will listen to one of these montages according to his or her needs.”

"Not only is the patient empowered, but he or she also takes an additional interest in his or her health and wellness approach, which is very important," adds Dany.

Composing for the future

"When you play music, you are in the moment. It is easier to leave aside the thoughts that are constantly spinning in your head and reconnect with your body. It is easier for some people to use music to express difficult emotions (anxiety, anger, sadness, etc.) or also to feel pleasure. When there are several of us playing together, the social aspect becomes very important,” explains Dany.

Dany also works with the MusiArt Group Choir, composed of patients from the MUHC Mental Health Department. "I sit down with the patients, validate the lyrics they have composed, add a melody they like, and then we record the song. Often, patients will write things they have never said before. It's an incredible form of expression! In the end, one of the objectives is to include their songs in the choir's next shows. It’s a way to share their creativity and raise awareness about mental health issues with the community."

And it works: All the songs in MusiArt's second and most recent album, Perception, were composed by the members of the choir.

In 2016, Dany also introduced an approach called Music Medicine, a listening station project. Tablets containing 10,000 pieces of music classified by musical style as well as headphones and armchairs are installed at the end of the corridors in the internal psychiatry unit. This access to music allows patients to self-regulate their moods at any time of the day or night.

Did you know? Seven music therapists work in different departments of the MUHC, including psychiatry, palliative care, oncology and neonatology. Please click here for more information on music therapy services offered at the MUHC.

The instrumental role of musical therapy