Home / News / Caregiving should not be a lonely journey

Caregiving should not be a lonely journey

Taking care of oneself can be challenging at the best of times, but it is especially difficult for caregivers of patients with degenerative diseases such as Alzheimer’s. On September 7, 2016, Friends of the MUHC will hold a lecture about the emotional and physical impact of Alzheimer’s disease on patients and their families (see sidebar). Dr. Jose Morais, director of Geriatric Medicine at the McGill University Health Centre (MUHC), will participate in the panel discussion, as will MUHC patient and caregiver Claire Webster, whose mother had Alzheimer’s disease. Claire tells us her caregiving story and how she learned to take care of herself along the way.

Claire Webster, a 48 year-old mother of three teenagers, knew from a very young age that being a caregiver to a loved one is a physically and emotionally demanding job. 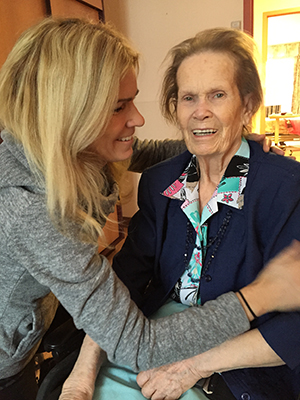 Claire Webster and her mother, Vieno Leskinen Rosenberg, who died last May, as a result of the final stages of Alzheimer’s disease. PHOTO: courtesy of Claire Webster.

“I was an only child and grew up watching my mother take care of my father,” she says. “He had various physical illnesses for years until he died of congestive heart failure at the age of 85, in January 2005.”

It was around that time that Claire’s mother, who was in her early 70s, started to show unusual behaviour. She had been a strong, active, outgoing woman, but had become socially withdrawn and inpatient; she was often confused and started to say odd things. At first, Claire was convinced her mother was suffering from caregiver’s stress, but a visit to the doctor, in September 2006, revealed she had Alzheimer’s disease.

“I cannot begin to tell you the shock for her and for me, Claire recalls with great emotion. “I didn’t know much about Alzheimer’s disease, and, since I received no information or support in managing the condition, I had to do the research on my own.”

The next five years were extremely challenging for Claire, as she witnessed her mother’s physical and intellectual unravelling and tried to manage the other components of her own life.

“My biggest error was to try to be a superwoman,” she says. “I was a young mother, a full-time working woman and a volunteer in the community. Being a caregiver certainly had a ripple effect on my husband and my children, who suffered to see me under so much stress.”

A volcano about to erupt

Claire’s situation was compounded when her mother underwent hip surgery and had to stay in hospital for six months. Soon afterwards, her ten-year-old son suffered a serious accident that required rehabilitation.

“I had to put on this mask and be there for everybody, but all I really wanted to do was crawl into bed and cry. I was so caught up in that cycle of care that if somebody would have offered me help, I would have said, ‘No, no, thank you, I’m fine.’ “

But Claire wasn’t fine. She had been treated at the McGill University Health Centre (MUHC) for a heart condition called sick sinus syndrome since she was 19 years old. In 2009, after a routine pacemaker replacement, she developed pericarditis, an inflammation of the heart. She also had severe mood swings and managed her stress by “having one too many glasses of wine in the evening”.

“I felt like I was a volcano about to erupt,” she says. “And I ended up having a complete nervous breakdown in July 2011.”

Claire underwent therapy, but it was during a retreat in the U.S. that she realized just how angry she was about her mother’s fate.

Friends of the MUHC Public lecture: Alzheimer’s Disease – The Emotional and Physical Impact on the Individual and Family

• Where: Atrium of the Research Institute of the McGill University Health Centre (RI-MUHC)

“Once I understood that, I was able to mourn the person I had known and to embrace who she was at that moment.”

Claire cared for her mother for four more years. Back in Montreal, Claire became a volunteer in the Alzheimer Groupe Inc. (AGI), a not-for-profit organization that provides services to people directly and indirectly affected by Alzheimer's. She then joined the Board of Directors, was president of the group from 2013 to 2015, and eventually became a Certified Personal Approach to Care™ Alzheimer Care Consultant.  During that period, one of her greatest joys was to mentor other families and advocate for caregivers.

“Sharing my experience was essential to my healing process,” she says. “I learned the hard way that you can’t go on this journey by yourself; you must seek help and accept help. You cannot be a caregiver alone.”

Recently, Claire founded Caregiver Crosswalk, a consulting firm that helps caregivers and families of people with Alzheimer’s disease cope with their demanding workload.

On September 7, she will take part in a public lecture organized by Friends of the MUHC on Alzheimer’s disease, home care and support (SEE SIDEBAR). One of her messages to caregivers will be about the importance of self-care.

“Your number one priority has to be your health; if you’re not healthy mentally and physically, you can’t be a proper caregiver to your loved one,” she says. “There are many ways you can do that: get some exercise, say no commitments that aren’t truly important and let go of the people, places and things that do not add value to your life.”

Claire’s mother passed away this past May, as a result of the final stages of Alzheimer’s disease.

“As much as I thought I would have been prepared for her death, I wasn’t. It was extremely hard and sad to witness her suffering. But on the other side, there’s a sense of peace for us and lightness for me, because for the first time in my life, I’m no longer a caregiver. Now, I can focus on myself and my family.”