Alive against all odds

When Amélie Bourassa talks about her stay at the Royal Victoria Hospital of the McGill University Health Centre (RVH-MUHC) and the birth of her daughter Florence in the spring of 2014, she goes through moments of bewilderment.

"When I look back at everything that happened to me, I can hardly believe that my body was able to overcome all that and that we’re there today, Florence and I," says the 34-year-old woman.

In April 2014, Amélie was 28 weeks pregnant when she began to feel weak and feverish. She was diagnosed with pneumonia, but the antibiotics prescribed to her didn’t work. Her condition continued to deteriorate and she was eventually admitted to the RVH-MUHC. 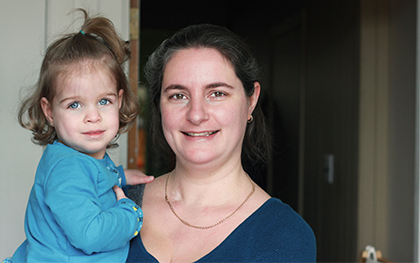 Soon after, Amélie took a turn for the worse and her medical team decided to place her in an artificial coma. Attached to a ventilator, her heart was only beating at 20 per cent and her kidneys stopped working. Two days later, while still in a coma, doctors decided to perform an emergency caesarean. “They feared I would not make it through the night, so they decided to try to save the baby.”

Florence Marcil was born at 29 weeks and weighed only 3.5 pounds. She was immediately transferred to the RVH Neonatal Intensive Care Unit (NICU). Although premature, Florence was strong. She started to gain weight and was weaned off oxygen as her lungs began to mature. At 38 weeks, Florence was finally ready to go home—but her mother was not.

A fight for survival

Amélie’s internal organs had begun to fail after Florence was born. She was placed on extracorporeal membrane oxygenation (ECMO), a technology that provides both cardiac and respiratory support when a patient’s lungs and heart are too weak to function. For Amélie’s boyfriend Samuel, those were horrible moments. 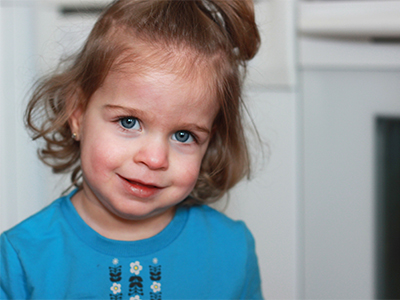 “I was back and forth between the adult and neonatal intensive care units and then I’d rush home to take care of our other daughter Delphine. It was so hard trying to explain to her why she couldn’t speak to mommy.”

When Amélie’s team of doctors determined the type of virus attacking her lungs and heart, they were able to successfully treat it.

“They discovered it was a type of virus that anybody could catch, but it affected me so severely because I was pregnant,” she says.

It was only on May 7 that Amélie woke from her coma, not knowing she had given birth. She met Florence for the first time on May 23, a month after she was born. Amélie was then transferred to a rehabilitation centre. After spending weeks in a coma, she had to learn how to walk again. Six weeks later, it was time to return home. In her baggage, Amélie carried a precious gift – an album filled with photos, heart-felt messages from staff and little treasures, like an imprint of Florence’s tiny foot.

“This album means so much to me,” says Amélie. “I am so grateful for everything the hospital did for us. Everyone went above and beyond.”