Reproductive Health: Is it a female issue? 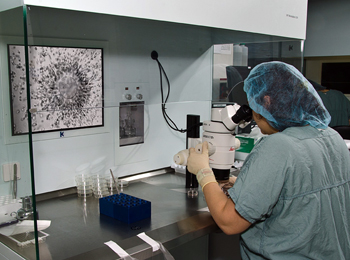 “Despite all the advances in assisted reproduction over the past ten years, the problem we keep running up against is the aging of reproductive cells,” says Dr. Patricia Monnier of the MUHC Reproductive Centre. “This is true for male sperm, but that's just the tip of the iceberg. The major problem is still ovarian aging in women.”

An obstetrician-gynecologist who specializes in infertility, Dr. Monnier sees many patients with diminished reproductive capacity, which for the most part is age-related. “Our success rates with assisted reproduction follow the natural aging process,” she says. Many studies have shown that fertility decreases as we age, with significant drops at 35 and 38 years old. Miscarriage rates in women also increase with age.

Although Dr. Monnier is sounding the alarm about ovarian aging, assisted reproduction nevertheless provides a constantly expanding range of treatments. “Advances in the field of in-vitro fertilization along with technological improvements have also led to oocyte cryopreservation, also known as egg freezing, which can help women preserve their ability to have children in the future,” she explains.

Cancer patients represent the majority of oocyte cryopreservation cases. Some types of chemotherapy can decrease ovarian reserve, a condition that can also occur in people with autoimmune diseases such as lupus, which require treatment that can be toxic for ovaries. People with genetic predisposition leading to premature ovarian failure, may also experience decreased ovarian reserve. “For patients dealing with a serious illness, this process is positive and allows them to imagine the future,” adds Dr. Monnier.

Although ovarian age is a key criterion for success, the psychosocial aspect is just as important. Research shows that couples experience extreme emotions during assisted reproduction treatment. “They can go from being happy and optimistic, to being frustrated, sad and even guilty,” says Dr. Janet Takefman, director of Psychological and Patient Services at the Reproductive Centre. “If it doesn't work, they also have to find the energy to start all over. Assisted reproduction is a trying experience that amounts to an emotional roller coaster. ”

The mechanisms of how stress acts on the reproductive system are still unclear. “However, there is some scientific data indicating that a woman who is very stressed before in-vitro fertilization will have fewer chances of success compared to a woman who is more relaxed,” says Dr. Takefman.

Dr. Monnier also points the finger at tobacco, alcohol and so-called “soft” drugs, which greatly decrease fertility in women. Patients exposed to second-hand smoke take longer to become spontaneously pregnant and have 50 per cent fewer chances of successful implantation after in-vitro fertilization than patients who are not exposed. The other risk factor is obesity, a major public health problem. Studies report that obese women have triple the risk of infertility compared to women of healthy weight.

“When an obese patient with ovarian dystrophy loses weight, she has a 90 per cent chance of ovulating on her own. I can't achieve this result with any other treatment,” says Dr. Monnier. “Without question, lifestyle and quality of life have a much greater influence on fertility than people think. Science can help, but at the end of the day women also have their part to play.”

Cancer survivor a new dad thanks to MUHC Reproductive Centre

Reproductive Health: Is it a male issue?