A new life for Nolan

Nolan Laberge was born with a cold. From day one, he suffered from a congested nose and throat. Once a month, his mother would bring him to the Montreal Children’s Hospital (MCH) of the McGill University Health Centre (MUHC) to suction the mucous from his nose and to stock up on antibiotics.

“Sometimes it got so bad that Nolan would have to sleep upright,” says his mother, Stephanie Comeau. In September of that same year, Nolan developed a rash over most of his body. At first, they thought it was just an allergic reaction, but all the allergy tests came back negative. 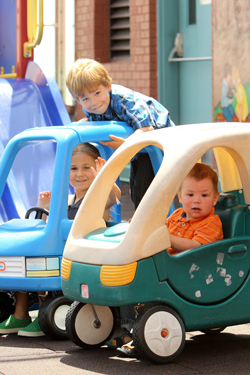 A week later, Comeau decided to bring Nolan to the MCH Emergency Room. “I knew something was wrong the moment I saw the doctor’s face,” she says. His rash had become bumpy, his lymph nodes were swollen and his abdomen was enlarged. He was quickly admitted to the MCH and seen by almost every department in the hospital.

“Everyone was doing tests on him to figure out what was wrong,” says Comeau. “And, then we got the worst possible news.” At nine months old, Nolan was diagnosed with Acute Myeloid Leukemia (AML). Very rare in children his age, AML is a type of cancer that leads to the rapid growth of abnormal white blood cells in the bone marrow. On average, only three or four children are diagnosed with AML a year at the MCH.

Over the next four months, Nolan received four rounds of chemotherapy and spent most of his time in isolation. “We never left Nolan’s side. We would sleep next to him and hold him through the night,” says Comeau and her husband Sebastien Laberge. At the end of February, things started to look up. Nolan’s doctors finally had some good news—the cancer was gone and he was being discharged.

Unfortunately, in a matter of weeks, the leukemia returned. A stem cell transplant was now required.

A perfect match close to home

Because the leukemia had come back so quickly, the race was on to find a matching stem cell donor. Luckily, they didn’t have to look far. Several years earlier, Nolan’s parents had donated their oldest son’s umbilical cord to Héma-Québec. In this cord blood they found the perfect match. 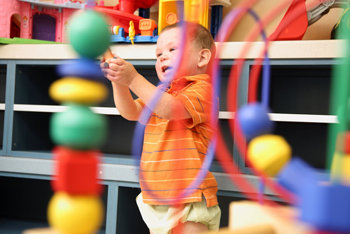 To prepare for the transplant, Nolan’s oncologist Dr. Adam Fleming recommended skin radiation to treat the resistant leukemia in his skin. “Radiation and chemotherapy are part of the ‘conditioning’ process, which basically wipes out the child’s immune system so that it doesn’t reject the new stem cells,” explains Dr. Fleming. “Eventually these stem cells ‘grow up’ and become the recipient’s new bone marrow and immune system, thus curing the leukemia.”

On May 3, 2012, Nolan received his transplant and by June he was sent home. “We were more than ready,” says Comeau. “Nolan had spent a total of nine months in the hospital and 95 per cent of his time in isolation.”

Since receiving the stem cell transplant, Nolan now shares his brother Nathis’s, blood type, which changed from Type A to B, and immune system.  “He’s a little Nathis mini-me!” laughs his mom, who says he also has eczema now, just like his brother.

Life is gradually getting back to normal for the Laberge family. Nolan is two years old and he is in daycare. He is still being followed on a monthly basis by various departments at the MCH, including routine check-ups with Dr. Fleming and Dr. David Mitchell, an MCH pediatric oncologist. Besides his mild skin problems and being allergic to the family dog, Nolan is healthy, happy and apparently quite the charmer. Since returning home, Nolan has also become a big fan of his Nintendo DS, which—naturally—was passed down to him from his older brother.