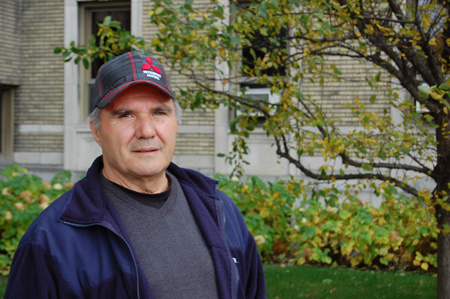 It’s hard to quit smoking, especially when you’ve been a smoker all your life, or almost. Sometimes, consciously thinking about it helps to break the addiction. And with the appropriate resources, such as the ones provided by the McGill University Health Centre (MUHC) IMPACT Program, people that commit to quitting smoking can tip the odds in their favour.

Giovanni Giammario smoked his last cigarette on August 26, 2014, after 50 years of tobacco use. That night, during dinner at his son’s house, he experienced some sort of spell: an unknown burning sensation in the pit of his stomach and in his oesophagus, and heaviness in his arm. “My son called an ambulance. I was taken to the Lakeshore Hospital and then transferred to the MUHC Royal Victoria Hospital. They performed a coronarography and discovered I had several obstructed arteries, some of which were 80 to 90 per cent blocked. It wasn’t a heart attack, but close,” says Giammario.

Giammario had tried to quit smoking a number of times before—in 2000, for example, when his wife passed away from cancer due to smoking. “I was able to quit for six months, but then I started smoking again. After that I tried over and over again, but each time, I picked it right back up,” he explains. “It was a constant fight, a never ending torture… I would say to myself, ‘Why don’t you just go ahead and smoke one? It feels so good after a meal.’”

Giammario underwent cardiac surgery this past September 9. Immediately after the surgery, he met with Michel Lebel, the IMPACT Program coordinator. “I told him I had lost my wife to smoking and tried so many times to quit, using all sorts of methods… It felt good to confide in someone. Then I decided to join the program.”

Five or six days after being released from the hospital, Giammario experienced some complications and had to undergo a CT scan. He was told there was an issue with one of his lungs, and hearing that made him fear for the worst. “Right then and there I thought to myself, if I make it out of this, I will never ever smoke another cigarette.”

It turned out the scan revealed a dark spot on Giammario’s lung that was due to water retention and not to cancer, fortunately. “When I saw my lung in the radiologist’s office, I swore to myself that was it! My decision was made; I would quit smoking once and for all.”

By enrolling in the IMPACT Program, Giammario was introduced to different medications designed to help quit smoking. He decided to quit on his own, because he felt motivated enough to do so.

“Even though certain medications can make the process easier, we respect the patient’s choice,” explains Lebel. “The idea is to exchange with the smoking patient, listen to them and validate the suffering and difficulties they may be experiencing. We offer support and suggest tools to help them succeed.”

Participants also periodically receive an automated phone call where they are asked to answer questions over the course of six months. And a tobacco cessation consultant is available to them, should they need additional help. The program is based on the tried and tested Ottawa Model for Smoking Cessation.

Two months after the surgery, Giammario says he doesn’t miss smoking at all. “I think about it and I hate it,” he says. And as he waits for the next round of automated questions, he remains focused and in full command of his own will.

A Smoke and Vape Free MUHC

The MUHC makes an IMPACT on smoking cessation

It's never too late to quit