A gift of unexpected sight

By Aaron Derfel, The Gazette 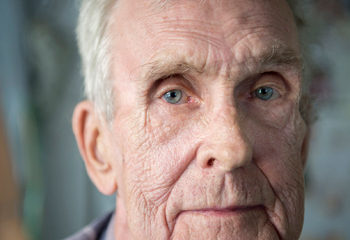 Pierre-Paul Thomas, legally blind all his life until earlier this year.

Legally blind all of his life, Pierre-Paul Thomas’s world was grey and shadowy. But as Aaron Derfel reports, a hospital visit for an unrelated injury led to the restoration of his vision and brought colours into his life.

When Pierre-Paul Thomas was a boy, he could not play hockey with his brothers and it broke his heart. For Thomas had been born blind. He endured the triple misfortune of suffering from congenital nystagmus — a condition in which the eyes move from side to side involuntarily — along with damaged optic nerves and cataracts bulging behind his pupils.

It was the 1940s — long before medicare became available — and Thomas grew up in a family of nine brothers and sisters in the town of St-Rémi-d’Amherst, more than 100 kilometres north of Montreal.

His brothers and sisters were forbidden from calling him blind for fear of their mother whacking their behinds. So Thomas learned to “see” with his fingers. When he grew older, he repaired bikes, and for his first full-time job, he kneaded dough in a bakery.

Thomas could make out the rough, unfocused outlines of a person in front of him. His world was always grey, full of shadows, and he walked with a white cane that he slid from side to side in front of him.

But two years ago, at the age of 66, Thomas fell down the stairs in a St-Henri apartment building and fractured the bones of his thin face, including those around his eye sockets. He was rushed to the Montreal General Hospital with severe swelling around his eyes.

A team of doctors operated on him and repaired those bones. One day, months later, he was examined by a plastic surgeon at the Montreal General, Lucie Lessard, renowned for her skills in micro-suturing.

A team of doctors operated on him and repaired those bones. One day, months later, he was examined by a plastic surgeon at the Montreal General, Lucie Lessard, renowned for her skills in micro-suturing.

During the consultation about repairing his scalp, Lessard asked matter-of-factly: “Oh, while we’re at it, do you want us to fix your eyes too?” Thomas was dumbfounded. “Fix my eyes?”

And so during two dates in February, Thomas underwent surgery at the Montreal General to remove the cataracts from his eyes. The operations, to put it mildly, were a success, for Thomas could now truly see for the first time in his life.

His shadowy grey world receded to reveal colours he had never before seen: Red, yellow and even dark green, which previously was only a dull black. Snowbanks, which he had perceived as a light shade of grey, were now luminous white.

He took a taxi for the disabled to visit his sister Giselle in Ahuntsic. During the ride, he gazed at the wonder of snowflakes falling, water trickling down the windows of the cab.

He stood outside his sister’s front door and rang the bell. Giselle answered right away. “Pierrot, you still can’t see, can you?” she asked. Her neighbour, Madame Verreault, stood beside her.

“On the contrary,” he replied, smiling. “I see two beautiful women.”

Tears rolled down the women’s cheeks. Tears rolled down Thomas’s cheeks too, but his sister reminded him to stop crying right that instant, because the doctors had warned that he had to keep water out of his eyes in the days after the operation.

When spring arrived, Thomas saw the tulips bloom. And he discovered something that no one had ever pointed out to him before: tree buds, simple tree buds.

“It’s like I’m a child all over again,” he said in his St-Henri apartment on a sunny Thursday afternoon.

He was sitting at the kitchen table, the same one where he struggled to do the crossword puzzles by taking out a loupe, placing it on the page, and straining through it with his right eye. He grabbed the book of crossword puzzles and held it up.

“It’s red,” he said, taking delight in describing the cover. “The title is in white. The price sticker is orange.”

But his new-found vision scares him sometimes. When he stepped out onto his sixth-floor balcony for the first time and looked down, he was seized with vertigo. He still shuffles up and down his hallway apartment brushing his hands against the walls for guidance.

“It’s very complicated for him,” his sister said. “He has sensorial memory because of the use of his fingertips, but his visual memory is only now developing.”

Depth perception is a challenge. And so is paying for things at the corner store.  He recently handed a cashier a $10 bill when he should have given him a $5.

“Look at the numbers, Pierrot,” Giselle, who was in the dépanneur, advised. “You can see the numbers on the bills now.”

Dr. Dev Cheema, director of the Ophthalmology Clinic at the Montreal General, noted that cataracts are still the main cause of blindness, but in North America, it’s macular degeneration. Even though most people develop cataracts with old age, Cheema said that children, even babies, can develop them.

Thomas might have been able to see at a young age, even with his damaged optic nerves and the nystagmus, but it was the cataracts that tipped the balance and made him legally blind, Cheema explained.

“All we had to do was remove the cataracts and he was able to see,” he said. “It feels great to do something like this. There’s always a positive story to tell when it comes to ophthalmology.”

Thomas will never be able to see perfectly, and doctors won’t be able to treat his nystagmus or repair his damaged optic nerves.

“But I’m happy,” he said. “A happy man. Say thank you for me to the Montreal General. They’ve given me my life back.”

A New Outlook on Life