​​​​​​​Caring for a child with a degenerative rare disease

“Before giving birth to my son, I was not aware of what it meant to live with a seriously ill child. As a parent, it is sometimes difficult to express the feelings of loneliness and isolation that come into your life when your child has a rare disease that most people have never heard of.”

Marie-Michèle Arpin is the mother of Thomas, a 5-year-old boy with a rare genetic disease called PBD-ZSD. Thomas is being followed at the Montreal Children's Hospital by Dr. Nancy Braverman, an internationally renowned specialist in peroxisomal diseases. To raise public awareness, Ms. Arpin contacted us to share her story.

What is this disease that Thomas has?

PBD-ZSD (Peroxisome Biogenesis Disorder under the Spectrum of Zellweger Syndrome) is an extremely rare genetic disorder that affects many organs in the body. Peroxisomes are cell components that contain enzymes involved in a variety of metabolic reactions. There is no cure, but thanks to research and the team following Thomas at the Children's, we have hope.

What are his symptoms?

At the moment, our son Thomas is living with a moderately severe sensorineural hearing loss, retinitis pigmentosa, fine and gross motor difficulties, balance problems, growth retardation, malabsorption of fat-soluble vitamins, hepatomegaly and dysfunctional adrenal glands. He has a feeding tube to help him eat properly. On his last MRI, there were signs of polymicrogyria, suggesting that Thomas could start having seizures at any time. Thomas has to take several vitamins and medications every day. He is now able to walk with his adapted walker and he can say a few words.

Was he diagnosed at birth?

Unfortunately, no. Thomas was born in November 2015 following a healthy pregnancy and from perfectly healthy parents. I had an uncomplicated delivery; his vital signs were normal and his neonatal screening had no scary results. There was no indication that he was sick.

There is, however, one screening test that would have diagnosed him at birth, the X-linked Adrenoleukodystrophy test (X-ALD), but it is not currently part of the newborn screening tests in Canada.

How did you find out that something was wrong?

When Thomas was two months old, I really started to wonder. Thomas was a baby who hardly ever slept and who cried a lot. He always seemed to be in pain. That's when we started going to the doctors.

After several visits to the ED, Thomas was referred to a pediatrician, who immediately noticed that something was wrong. His liver enzymes were 10 times higher than normal, he had an enlarged liver and he was not growing well in height and weight. “I'm going to have to transfer him to another hospital to do further tests, because this is now beyond my expertise,” he told us.

The result was a month-long hospitalization with stressful and trying days of tests. Ultrasound, X-ray, gastroscopy, biopsy, sweat test, blood samples, MRI, muscle and nerve exams, EEG, visual evoked potential, and more. Specialists told us that Thomas was a mystery to them because most of the results fell into grey areas. It was, by far, the worst experience of our lives.

How did you find out about his diagnosis?

Research continued and on June 16, 2016, Thomas was diagnosed with a rare disorder called PBD-ZSD.

“Your son has a rare genetic disorder. All of his organs will fail, one by one, until he dies. He probably won't make it to his first birthday, so enjoy the time you have left with him.”

These words still ring in my ears today. No words can describe the excruciating feeling of learning that your child has a rare degenerative genetic disease and that there is no treatment to save him.

Following this announcement, we were put in touch with a fantastic geneticist specializing in peroxisomal diseases and working at the McGill University Health Centre: Dr. Nancy Braverman. She and her team are helping us tremendously with all the problems Thomas faces. Every time we visit the Children's, we meet with several specialists who try to alleviate Thomas' problems.

In addition, Dr. Braverman’s team conducts research projects in order to better understand the disease and develop therapies. All these projects require the precious collaboration of their academic and industrial partners, foundations and family groups. Together, we are stronger!

For my part, I have tried to turn our difficult situation into a slightly more positive experience. With the help of two other Canadian mothers who have faced PBD-ZSD, we created the first support and awareness community in Canada, PBD Canada.

Why did you want to tell your story?

Raising public awareness really does make a difference. It gives families like ours hope and it can lead to new treatments that could save lives. People with a rare disease deserve our care and energy to improve their situation! 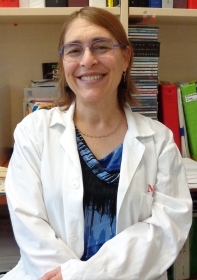 The research work of Dr. Nancy Braveman, senior scientist in the Child Health and Human Development Program of the Research Institute of the MUHC, is centred on a group of inherited disorders caused by defects in the genes responsible for the proper function of peroxisomes, important components of cells that help to metabolize lipids, or fatty acids.

Peroxisomal disorders can involve either the assembly of the peroxisome itself (as in peroxisome biogenesis disorders) or specific enzymes located in the peroxisome. All of these conditions feature the loss of enzymes required by the body to metabolize important lipids. The consequences are a progressive disease of the nervous system, eye, hearing, bone, liver, kidney and adrenal glands.

Dr. Braverman’s laboratory team engineers mouse models of the disorders to investigate how these enzyme defects cause disease. To provide patients and their families with better prognostic information and care, the laboratory has established a patient registry documenting variations in disease outcome and is identifying drugs and therapies that can improve outcomes. A preclinical trial of one drug and gene therapy is underway.