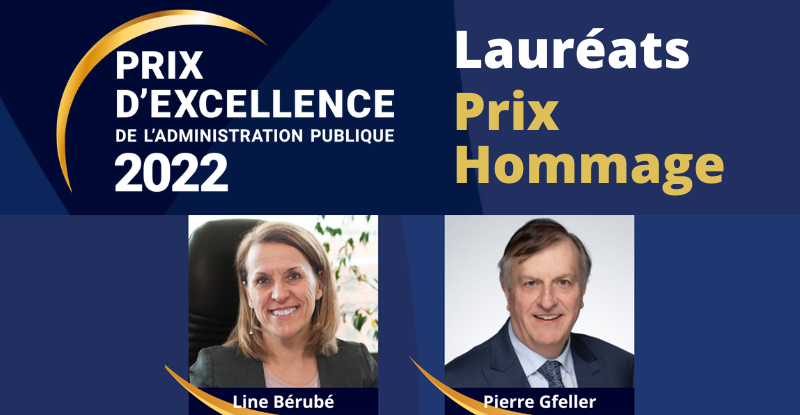 Quebec, October 18, 2022. L’Institut d’administration publique du Québec (IAPQ) announced the two co-laureates of this year’s Prix Hommage 2022. This award is presented to public sector administrators or academics recognized by their peers and distinguishable for the quality of their management or for the contribution they have made to public administration in Quebec. Recipients are recognized as having significant influence in their field of activity and are considered to be either at the height or conclusion of their career.

In view of the quality of the nominations received, the jury selected the following two individuals to receive the Prix Hommage:

Originally a family physician, Dr. Pierre Gfeller has made improving the organization of services and the quality of care his priority for more than 40 years. Since 2018, he has been President and Executive Director of the McGill University Health Centre (MUHC) and President of the McGill University Integrated Health and Social Services Network. He was previously the head of the CSSS d'Antoine-Labelle, Hôpital du Sacré-Cœur de Montréal and CIUSSS du Nord-de-l'Île-de-Montréal.

Dr. Gfeller earned the respect of his peers and distinguished himself by his great achievements as a leader. Under his leadership, the MUHC has re-established itself as an important member of the Quebec health network and one of the top three research hospitals in Canada. It was also under his leadership that the MUHC successfully met the challenges of the COVID-19 pandemic by entrusting, as of March 2020, management of the institution to an emergency measures coordination center with a strong emphasis on infectious disease expertise. This organization became a veritable nerve centre for decision-making and an important link between the institution and its network partners, many of whom benefited from direct support from the MUHC.

Dr. Gfeller's areas of interest include the organization of health services, particularly regional approaches to the delivery of service, and the concepts of prioritization and relevance. He is also interested in the economic approach to institutional budgeting and in the evaluation of financial incentives for the organization of medical services. Pierre Gfeller has developed clinical expertise in the fields of psychiatry, emergency medicine, traumatology and occupational health. He also has a special interest in cross-cultural management.

Collaboration, transparency and partnership with all the stakeholders in the sector are key for this manager, who always puts patients at the centre of his efforts. Equity, diversity and inclusion are among the values that are important to him.

"My success is based on the exceptional support and collaboration of my various mentors, management committees, executive teams, as well as all employees, health professionals, foundation board members and partners, who, with commitment, are constantly striving to improve the services offered by the health and social services network," Pierre Gfeller, co-recipient of the Prix Hommage 2022.

Ms. Bérubé and Dr. Gfeller will receive their awards at a ceremony on November 24 at the Centre des Congrès de Québec. The winning teams of the eight achievement awards as well as the winners of the Relève d’excellence and the Travail étudiant award will also be announced at that time. Interviews with the two winners will be broadcast on the IAPQ website prior to the ceremony. The Prix d’excellence de l’administration publique were established in 1985. For more information, visit the Institut d'administration publique du Québec website.

The IAPQ thanks all the partners of the Prix d’excellence, including the two sponsors of the Prix Hommage, the Ministère du Conseil exécutif and Beneva.