How can we benefit from a drug without having to deal with any undesirable side effects? That’s the idea behind the work that Dr. Stéphane Laporte is conducting in his laboratory at the Glen site of the Research Institute of the McGill University Health Centre (RI-MUHC).

For several years, Dr. Laporte has been working on predicting the pharmacological profile of drugs to provide more targeted treatments. His team, along with Dr. Michel Bouvier from the Institute for Research in Immunology and Cancer (IRIC) at the Université de Montréal (UdeM), has developed luminescent biosensors that can be used to “light up” the different signalling pathways of a drug in cells, highlighting the way the drug acts in the body. The researchers’ goal is to make it easier to identify new therapeutic molecules that are safer and more effective.

“With this new biosensor technology, we can see which signalling pathways are active for a given drug. This would allow us to keep only the molecules that produce the desired effects without causing side effects or inducing increased tolerance over time,” says Dr. Laporte, a scientist with the Metabolic Disorders and Complications Program at the RI-MUHC as well as a professor in the Division of Endocrinology and Metabolism at McGill University. 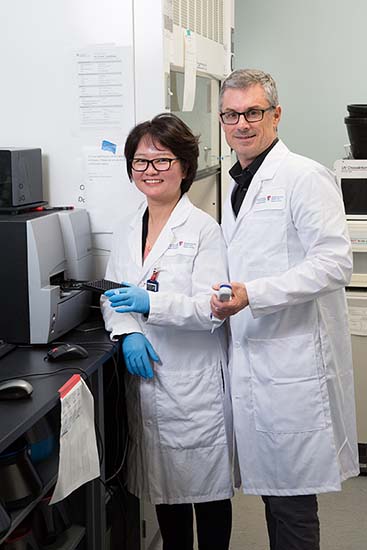 “For instance, consider fentanyl or morphine, both of which are powerful analgesics used to relieve pain. If we could know all of their signalling pathways, we could keep their anti-pain effects while eliminating side effects like respiratory depression or constipation.”

The potential of this innovative technology is so great that the Quebec-based researchers have already been approached by international pharmaceutical companies. A license agreement with a French company, Domain Therapeutics, and partnerships with American pharmaceutical giants BMS and Pfizer are now in place, allowing them to use the technology. Laporte expects that new targeted and effective drugs will be available for use within the next five to ten years.

“I'm happy about these achievements made possible through the work of my team and our many collaborative efforts over the years,” says Dr. Laporte. “The interest from the pharmaceutical industry is indicative of the leadership and expertise of our laboratories and collaborators at McGill, Université de Montréal, and Université de Sherbrooke in the field of biosensors. The fact that all this is being done in Quebec makes me all the more proud.”

For instance, consider fentanyl or morphine, both of which are powerful analgesics used to relieve

pain. If we could know all of their signalling pathways, we could keep their anti-pain effects while

eliminating side effects like respiratory depression or constipation. — Stéphane Laporte

Drs. Laporte and Bouvier have been working closely with major collaborators including Dr. Terry Hébert from McGill University, Dr. Richard Leduc from Université de Sherbrooke, and Drs. Christian LeGouill and Graciela Pineyro from UdeM, under the umbrella of a Quebec GPCR consortium thanks to support from CQDM –Biopharmaceutical Research Consortium. 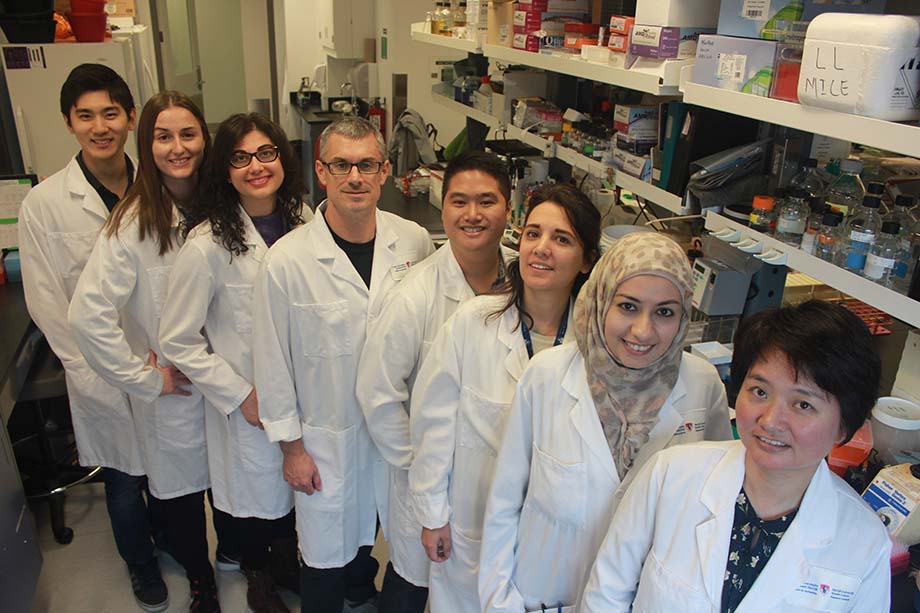 Approximately 40 per cent of prescribed drugs – whether they are medications for the heart like beta blockers or opioids for chronic pain – target the class of proteins in the human body called G protein-coupled receptors (GPCR). These receptors activate proteins that in turn can activate a drug's various signalling pathways.

“GPCRs are proteins that are embedded in the membrane of cells. They play a role in many physiological responses, like contractions of the heart or the uterus, controlling blood pressure, release of glucose, and even our ability to see, taste or smell,” explains Dr. Laporte.

While over 800 GPCRs, controlling an array of processes in the human body, have been identified, these proteins remain mysterious for many scientists. Not so for Dr. Laporte and Dr. Bouvier; they both did their postdoctoral work at Duke University in the U.S. in the labs of Dr. Marc Caron and Dr. Robert Lefkowitz, the latter considered one of the “fathers” of GPCR and a winner of the Nobel Prize in Chemistry in 2012.

Since his return to Quebec, Dr. Laporte has concentrated on understanding the molecular and cellular mechanisms that regulate GPCRs in living cells. In 2013, Dr. Laporte, Dr. Bouvier and collaborators developed the first GPCR biosensor technology and they’ve been improving it ever since.

“What’s extraordinary is that our technology evaluates all the signalling pathways that are activated by different drugs very quickly and very effectively,” says Dr. Laporte. “Furthermore, these biosensors can be used to predict the pharmacological profile of countless molecules in diverse fields like cardiology, endocrinology, neurology and oncology.”

Nature at the service of science

In order to create this luminescent biosensor technology, the scientists drew from the example of a natural mechanism found in many living organisms, especially marine life: bioluminescence. Various jellyfish, algae and plankton produce light via a chemical reaction between luciferin (luminescent substrate) and an enzyme called luciferase, during which chemical energy is converted into light energy. This light energy then excites another fluorescent protein that is also present in these organisms. In this case, the researchers used the sea pansy, a marine organism from the same family as jellyfish and corals. 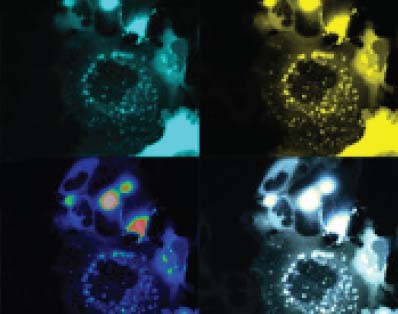 The research team took the luciferase and the fluorescent protein from the sea pansy and put them together on the proteins and receptor that they were studying. And just like in marine organisms, when the receptor comes in contact with another molecule, it triggers a cellular response and emits light and fluorescence that can be detected, indicating that the signalling pathway in the cell is activated.

“In less than a few minutes, we can screen nearly a hundred receptors or molecules that are potential therapeutic targets or drugs to treat problems that are linked to the central nervous system or metabolic, cardiovascular, respiratory, urinary or gastro-intestinal illnesses,” explains Dr. Laporte.

With their world-renowned expertise in GPCR and this new powerful technology, these two researchers and collaborators have opened the door to a multitude of possibilities for the development of drugs that are more effective and better targeted.

Using this innovative biosensor technology, pharmaceutical companies will find it easier to sift through their large databases of pharmacological compounds and find out if new molecules might activate GPCRs that have yet to be capitalized on, with the goal of developing treatments that are better adapted to the physiology of patients and that have a lower risk of side effects.

Read Face to Face with Dr. Stéphane Laporte at  rimuhc.ca/face-to-face

Dr. Laporte’s team, in collaboration with researchers at the University of Montreal, has also helped to develop and validate a molecule that binds to a GPCR and, via the activated signalling pathway, blocks uterine contractions. This drug has been tested on women suffering from dysmenorrhea, a poorly understood syndrome that causes painful uterine contractions during menstruation. This treatment could also lead to the development of new drug therapies to help in preventing premature births.