Guidance, optimism, and moderation: living life to the fullest with Crohn's

"The bottom line is, you have to be positive, you have to embrace it, and you have to run with it," Marina Lavranos-Klironomos says as she shares her outlook on life. Her optimism is palpable, and has not been dampened by her 20 year battle with Crohn’s disease.

Crohn’s causes inflammation of the gastro intestinal tract. It is complex and unruly, but mainly affects the body’s ability to absorb nutrients, digest food, and eliminate waste. For the 61-year-old mother of two, the struggle began 20 years ago. She fell ill, unable to leave her home without being sick. Mornings were agonizing. 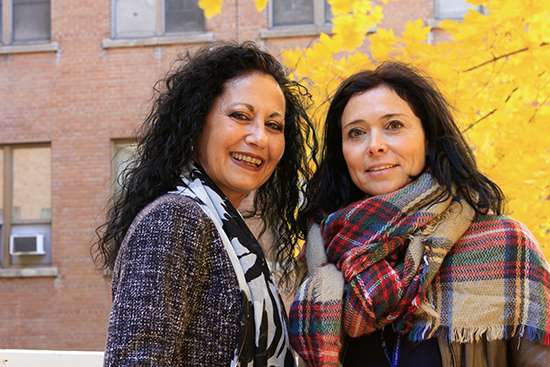 She was diagnosed in 1996 with Crohn’s and IBS, and began her treatment at the Royal Victoria Hospital immediately. She says it was an uphill road, finding the right mixture of medication, diet, and lifestyle.

While Marina kept a positive attitude, she was faced with a difficult decision. Being a mother of two young children and working in a middle management position, her illness left her no choice but to leave her career behind. It was a large stressor in her life.

“My worst nightmare was to be standing and training a large group of management employees in the morning, and having to run out to the bathroom. It never happened, I was really lucky, but I was stressing myself just thinking about it,” she said.

For the greater part of the last 20 years, Marina had been in remission. This means her Crohn's was not active, and her symptoms less severe. A stressful period in her life began in 2013. The health of her parents’ began to deteriorate, which led to their passing in 2016. This played an active part in her relapse, and is when she met her current nutritionist at the Montreal General Hospital, Carolyne Brien.

Marina says her life has completely changed since first meeting Carolyne. Marina works with Carolyne to manage her diet. Together they work to come up with tips and tricks to manage her symptoms, as well as assess the effectiveness of her treatments. She is also regularly followed by an MUHC gastroenterologist.

“My whole life I’ve been around 110 pounds. I was 143 pounds, and painfully bloated, when I began seeing Carolyne after my relapse,” she explains. “I lost all the weight, and started to feel better. Without Carolyne I would not have been able to get through this.” 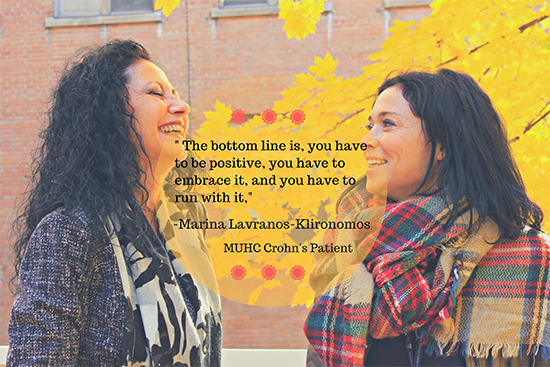 Carolyne says that it’s important to create a comfortable, judgement free zone in her office so that her patients can open up to her. She stresses the fact that her role is not to police what people are eating. Her goal is to help guide people and keep them on track to ensure they are as healthy as they can be, despite the challenges they may face.

“It’s challenging because patients are often really sick, tired and in pain. I myself have celiac disease, so I know what it means to be in pain. It was really difficult for me when I was diagnosed as a student in university,” she explains.

The Holidays are a time of indulgence for many, including Marina. A woman of Greek heritage, she’s no stranger to large family parties. She stresses the fact that she too can enjoy her holiday parties and outings despite her condition. Her rule: it’s all about moderation!

“I cook when I am at home for family, for everyone, and when there is something I know will bother me, I just have a little bit of it,” she says. “I won’t deprive myself.”

As Carolyne explains, the tips she has for her patients to stay healthy and in good shape during the holidays are tips that can be followed by everyone. 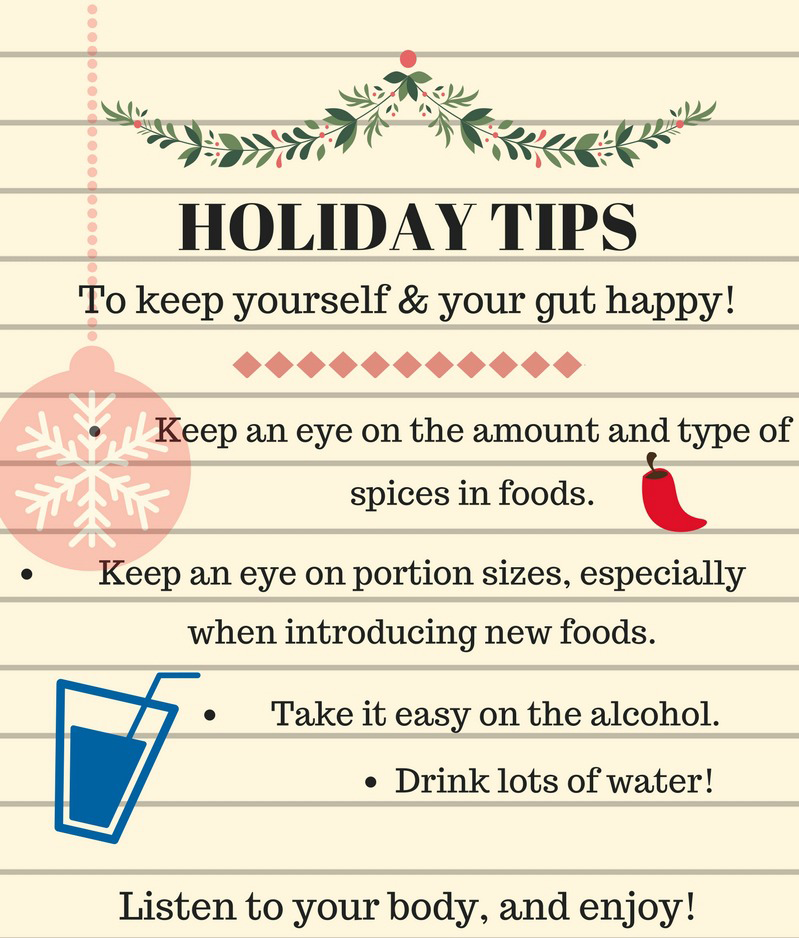 We often use the phrase “butterflies in your stomach” without really giving it too much thought. However, it isn’t coincidental that it’s regularly used to describe an anxious or excited tummy. As MUHC Gastroenterologist Dr. Constantine Soulellis explains, the gut is often referred to as the “second brain,” as it houses millions of neurons.

“A very common diffusion of stress is through the intestinal system,” he says. “Stress can cause altered bowel habits, can cause reflux, can cause full blown vomiting, and squeezing of the upper gastrointestinal tract.”

A person doesn’t need to have Crohn’s, Colitis, or Irritable Bowel Syndrome (IBS) to feel the impact of thinking with your gut. Think back to a time when you had to give an important presentation, write an important exam, or undergo a high-level job interview. Emotions play a big role in how our gut interacts with our mind, and in some ways the two speak to each other on a daily basis.

‘Tis the season: Some mindful eating tips for the holidays

It's Crohn's and Colitis Awareness Month