Gender matters when it comes to heart disease

It is easy to characterize heart disease as a male health issue. The “Hollywood Heart Attack” is the cinematic image of a man clutching his chest in agony that has come to shape our views of what a heart attack should look like. 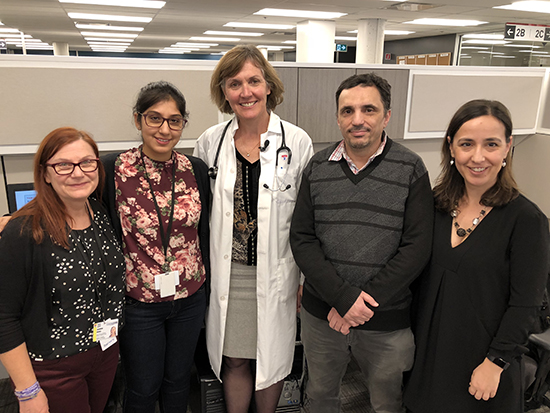 “What’s frustrating is people still doubt heart disease is a woman’s problem, even healthcare professionals still have this misconception,” Dr. Louise Pilote explains from her second-floor office at the Centre for Outcomes Research and Evaluation (CORE).  “Researchers must continue to be aware that heart disease in women is under-undiagnosed and under-studied and there is still more work to be done.”

Dr. Pilote’s research is helping change the narrative when it comes to women’s heart health.

Dr. Pilote, a senior scientist from the Cardiovascular Health Across the Lifespan Program at the Research Institute of the McGill University Health Centre (RI-MUHC), was a recent recipient of the Berlin Institute of Health (BIH) Excellence Award for Sex and Gender Aspects for her work incorporating gender aspects into biomedical research.

Pilote’s innovative study of gender-related factors such as socioeconomic and psychological determinants has allowed researchers to highlight the differences between men and women’s hearts to better evaluate and understand how to treat them.

“Sex and gender differences have allowed us to find things we wouldn’t have otherwise found. For example, the coronary arteries of women are different from men. Women can have a heart attack and their coronaries look completely normally,” said Dr. Pilote, who was recently named a Women of Distinction in Health by the Woman’s Y of Montreal. “Knowing this means we can decipher the usual factors and see they aren’t always the cause of the problem and that employing the usual treatment isn’t always the right solution. This has led us to understand a new path of physiology of disease which we call micro-vascular dysfunction in women.”

The 56-year-old helped develop a gender “scorecard” for healthcare workers to help them understand and recognize the effect of sex and gender differences in women patients with heart disease since a misleading diagnosis can delay early treatment and prove deadly. Flagging early symptoms of a heart attack is crucial.

These early signs are missed in 78 per cent of women, which can prove deadly since women who suffer from a heart attack are more likely to die or experience a second heart attack compared to men.

Physicians and patients do not always spot the subtleties since most expect a feeling akin to an elephant sitting on their chest to suddenly appear. But symptoms vary and can include shortness of breath, weakness, fatigue, dizziness and women may experience pressure or tightness, signs of nausea, unusual fatigue or jaw pain. These telltale signs can too often be attributed to anxiety or heartburn and not a serious problem.

“It goes both ways – women should know what the signs and risks are and what symptoms to report to their GP,” said Dr. Pilote, a professor of medicine at McGill University. “Women must be taught that heart disease can also come with chest pain.”

An early diagnosis is key for women who may be experiencing heart disease. And even more so with certain groups within the female population more vulnerable to the problem, including ethnic, immigrant and indigenous populations and those with a poorer socio-economic status.

“It’s not all about biology but the psycho-social reality that people live day-to-day, which tends to be more detrimental in women,” Dr. Pilote said, pointing out women’s important roles within the family household coupled with busy work lives means it can be hard to find time to take necessary care of their health. “These are major factors that as a society we need to recognize and try to improve.”

Dr. Pilote and Dr. Matthias Friedrich, chief of the Cardiovascular Imaging of the MUHC, were recent winners of grant money for their work on novel diagnostic modalities that use magnetic resonance imaging to non-invasively diagnose this type of disease. This is another key benchmark since identifying the disease first is the priority in order to develop women-targeted therapy.

Despite some worrying numbers, the prognosis is optimistic as more attention than ever is being focused on women’s health. The Heart and Stroke Foundation unveiled its national Heart Month campaign on February 1st, which is focusing on women’s health as it looks to illuminate the public about this overlooked issue. Pilote, a mother of four – including three girls – commended this initiative as she looks for partners to bolster the new narrative on heart disease in women.

“With more research in this area we will gather more data and that will help convince more people that this is important,” Dr. Pilote said. “At the end of the day, by focusing on women you also focus on the family unit and then you may have an impact on a generation by focusing on women’s heart disease because the whole family will benefit from it.”