Pushing screening of ovarian and endometrial cancers one step further

Montreal — A team from the Research Institute of McGill University Health Centre (RI-MUHC) in Montreal has joined forces with researchers at Johns Hopkins to bring screening and early detection of ovarian and uterine cancers one step closer to clinical implementation. Researchers developed a test that provides a safe and minimally invasive method for earlier diagnosis of ovarian and endometrial cancers. This test – called PapSEEK – aims to analyze small amounts of cancer DNA obtained from Pap samples from the cervix, uterus as well as blood by identifying common genetic mutations associated with these cancers. Their findings were published in the March 21 issue of Science Translational Medicine. 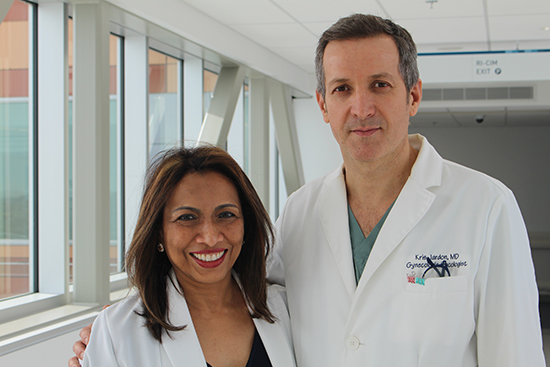 Dr. Lucy Gilbert and Dr. Kris Jardon, at the Research Institute of the MUHC

“If a cancer can be detected early, it can be cured. Ovarian and uterine cancers – usually diagnosed at a late stage– take so many women’s lives and cause so much suffering,’’ says study corresponding author Dr. Lucy Gilbert, who is the director of Gynecologic Cancer Services at the McGill University Health Centre and a professor of Obstetrics and Gynecology and Oncology at McGill University.

“Diagnostic tests do not always reliably distinguish benign conditions from cancer, leading to unnecessary procedures,” adds Dr. Amanda Nickles Fader, director of the Johns Hopkins Kelly Gynecological Oncology Service, Department of Gynecology and Obstetrics, and a corresponding author on this study. “The high mortality associated with some gynecologic cancers makes screening a priority, and new diagnostic approaches are urgently needed.”

Based on previous groundwork and expertise in gynecological cancers, Dr. Gilbert, who is also a scientist from the Cancer Research Program at the RI-MUHC, proposed to the team at Johns Hopkins to collect samples not just from the cervix but also from inside the uterus, to increase the likelihood of detection of cancers from the ovaries, fallopian tubes and uterus while the cancer is still at its early stages. Her proposal paid off as the research team found that samples taken from the uterus were more likely to detect ovarian and uterine cancers than that from the cervix. “In this study, we have shown that these cancers can be diagnosed earlier by identifying the specific mutations that cause the cancer, rather than relying on indirect markers such as medical imaging and symptoms,” adds Dr. Gilbert.

Endometrial and ovarian cancers together are the third most common cause of cancer deaths in women in North America and other high income countries.  Existing tests such as transvaginal ultrasound rely on nonspecific factors such as size of the tumour and may be positive only after the more aggressive forms have spread to other organs. Imaging also results in many false positives, highlighting the need for a more reliable screening tool. In this study, researchers took advantage of the fact that tumour cells from ovarian or endometrial cancers are often carried into the endocervical canal, where they can be gathered with a Pap brush.

Getting closer to tumour sites

Dr. Gilbert’s team at the MUHC guided the team at Johns Hopkins on the Tao brush technique ─ a technique that extends the brush into the uterus allowing for the  collection of cells closer to where the cancers could originate, thus improving the sensitivity of the test. The pap smear relies on the cancer cells reaching the cervix.

“This special brush sampling procedure is a simple outpatient technique, which any trained gynecologists can carry out in a clinic without anesthesia,” explains Dr. Kris Jardon, study co-author, who is a gynecologic oncologist at the McGill University Health Centre and a scientist from the Cancer Research Program at the RI-MUHC. “This increases the likelihood of widespread clinical implementation after we have carried out the appropriate validation steps”

Researchers tested the effectiveness of PapSEEK on samples gathered from 382 patients with endometrial cancer, 245 patients with ovarian cancer and 714 healthy controls from different hospital sites across the U.S., Denmark, Sweden and Canada. 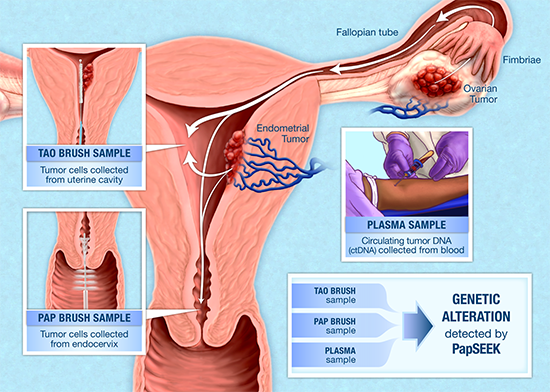 “In high grade ovarian and uterine cancers, cells detach easily and spread while the tumours are still small and not noticeable,” adds Dr. Gilbert. “Currently, there are no tests available to allow diagnosis of these aggressive subtypes of cancer in earlier stages, because they have not caused symptoms and are not easily identified by medical examinations.”

An estimated 7,300 Canadian women are diagnosed with endometrial cancer in Canada each year, and more than 1,200 will die from the disease. Ovarian cancer is less common but more lethal, affecting more than 2,800 women and killing about 1,800 in Canada annually.

“The cervical routine Pap test has dramatically decreased the deaths from cervical cancer,” says Dr. Gilbert, “but it is unable to detect endometrial or ovarian cancers, the most lethal and most common gynecologic malignant tumours in countries where Pap tests are routinely performed. We have shown this special uterine Pap test has the potential to be developed into an outpatient screening test that can do for uterine and ovarian cancers what the cervical pap test did for cervical cancer.”

Founded in Montreal, Que., in 1821, McGill is Canada’s leading post-secondary institution. It has two campuses, 11 faculties, 11 professional schools, 300 programs of study and more than 37,000 students, including 8,300 graduate students. McGill attracts students from over 150 countries around the world, with more than 7,200 international students making up 20 per cent of the student body. Almost half of McGill students claim a first language other than English, including more than 6,200 francophones. www.mcgill.ca