MONTRÉAL—Leading researchers, cancer centres and hospitals in Montreal, and the Terry Fox Research Institute are partnering to generate new advances in personalized and precision medicine with the aim of improving treatments for 18,000 patients treated annually with cancer.

For the Terry Fox Research Institute, the launch of this consortium marks another step forward in accelerating precision medicine for all Canadians. This is the second pilot project the Institute has created as part of its strategy for a pan-Canadian network of linked cancer centres.

The Montreal pilot project members will further develop immunotherapy, a new cancer treatment strategy that enhances an individual’s immune system to fight cancer and which has recently shown impressive results for some patients. 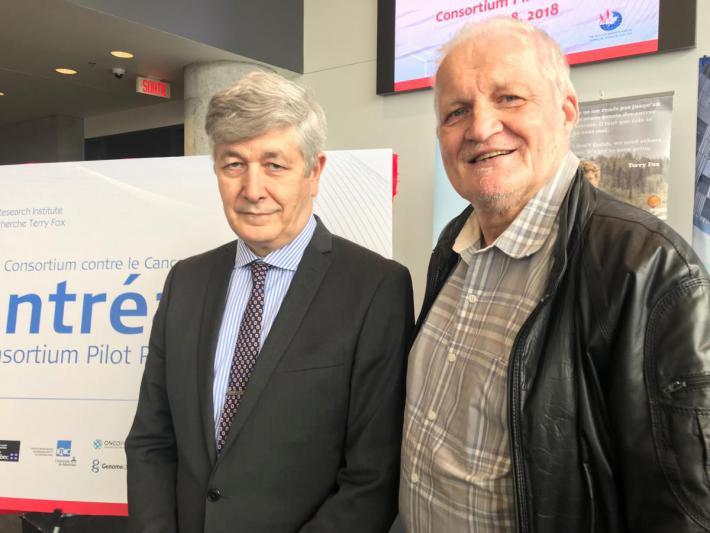 Stan Czebruk is one such patient whose life changed through Immunotherapy.

“It was in 2009. I was hiking in Scotland, when my wife called me and announced that I had cancer. It was a melanoma on my left ear that spread later to my lungs and brain,” explains the 60 year-old Montrealer, who is treated at the McGill University Health Centre. After two craniotomies and a battery of treatments, he is now in remission and will undergo his last immunotherapy treatment at the beginning of August.

The Montreal Cancer Consortium will focus on immunotherapy treatments for melanoma and acute leukemia initially and use the knowledge and resources gained to expand into other tumour areas.

“It has been a long journey, but I have a lot of faith in the health care system and great hope that more research will be done and more treatments will be found,” says Mr. Czebruk, who graduated from Concordia University with a Bachelor of Commerce in the Eighties and has since decided to return to his first passion by beginning a double major in Geography at his former university in September.

“A lot of progress has been made in melanoma research in Quebec; there is now an urgent need to develop a network to recruit patients and offer them new therapeutic options within a centre of expertise. This is the aim of this consortium bringing together experts to stimulate cancer research and care,” says MCC co-investigator Dr. Catalin Mihalcioiu, who is a medical oncologist at the MUHC, a scientist from the Cancer Research Program at the Research Institute of the MUHC and an assistant professor of Medicine at McGill University.

“Melanoma is a kind of cancer that can be easily neglected especially in the elderly or among young people who do not pay attention to their health,” adds Dr. Mihalcioiu, who has been treating Mr. Czebruk since 2013.

Working together, the MCC researchers will also aim to better understand how various aspects of the immune system relate to acute leukemia and why therapy works for some patients but not others. They hope to identify new biomarkers and novel targets that will respond to immunotherapy treatments.

“In total, the Montreal Cancer Consortium will harness the data power of more than 18,000 patients annually and more than 50 ongoing precision medicine and immunotherapy clinical trials, with the goal of developing one of the most patient-centric oncology innovation poles in Canada,” says Dr. Ian Watson, Canada Research Chair in Functional Genomics of Melanoma and assistant professor, Department of Biochemistry at McGil, member of the Goodman Cancer Research Centre, and co-principal investigator for the MCC project.

The MCC will receive $6.5 million over the next two years from several organizations supporting the initiative. As the project catalyst, TFRI is providing $2 million and Oncopole, Genome Québec, Goodman Cancer Research Centre and Institut du Cancer de Montréal are among several other co-funders.