Mechanism That Reduces Effect of Cocaine on Brain Discovered

A type of brain cell known as microglia plays a key role in reducing the effects of cocaine in the brain, according to a major study by a team from the Research Institute of the McGill University Health Centre (RI-MUHC) in Montreal.

The discovery, published in the journal Neuron, establishes for the first time that microglia can diminish the adverse changes to neural circuitry brought on by the chronic use of cocaine and has significant implications for developing an effective treatment for addiction. 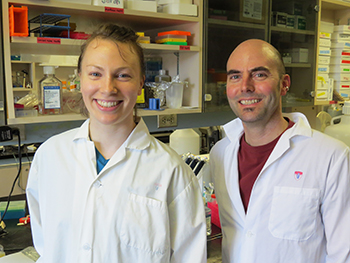 “What we discovered is that cocaine activates these microglia, which causes the release of an inflammatory signal which then tries to reverse the changes that cocaine is inducing in the neurons,” says the study’s senior author, Dr. David Stellwagen, a researcher from the Brain Repair and Integrative Neuroscience at the RI-MUHC and associate professor in the Department of Neurology and Neurosurgery at McGill University.

Microglia may not be as well known as neurons, the brain cells that relay messages, but they have many important functions. They constantly monitor their environment, and can act to maintain normal brain functioning. When they find something amiss, they can produce molecules that instruct neurons to make adaptive changes to their connections. One such example is the inflammatory molecule known as tumor necrosis factor (TNF).

Using a mouse model, researchers detected this microglia-mediated reversal by looking at how TNF acts on a particular set of synapses in the brain. “These connections are really important for regulating the behavior response in animal models to drugs of abuse such as cocaine,” says co-first author Sarah Konefal, a McGill PhD student in the Integrated Program in Neuroscience in Dr. Stellwagen’s lab.

The team found that TNF suppresses specific synaptic changes caused by cocaine–changes that are thought to underlie addiction. But Dr. Stellwagen explains that this beneficial mechanism doesn’t last. “The microglia response fades over time. One of the things that could transition somebody from just casual use into chronic dependency might be the fading of this adaptive signal which then allows the drugs to solidify their change to the neural circuitry.”

So can microglia be enticed to keep going? To find out, the team used a pharmaceutical agent that stimulates microglial production of TNF. Researchers observed that a cocaine-induced behavioral change in mice, the progressive increase in movement induced by cocaine,–was reduced in the animals who received this agent.

This exciting result holds promise for one day developing treatments that could cut down on drug relapse rates, which can run as high as 80 per cent. As Dr. Stellwagen puts it, “If we could develop a treatment that would suppress the craving that addicts have in stressful situations, or when they are re-exposed to situations in which they’d normally be taking the drug, that may allow them to avoid relapse. And that’s really the therapeutic goal of the work we have been doing.”

Dr. Stellwagen and colleagues are now investigating if the stimulated release of TNF can actually suppress cravings for cocaine. They are also hopeful that this work can be applied to other addictive substances including alcohol and methamphetamine.

Discovery of the mechanism that reduces the effect of cocaine on brain from McGill University Health Centre on Vimeo.

The Research Institute of the McGill University Health Centre (RI-MUHC) is a research centre with a world-wide reputation in the field of biomedical sciences and health care. Established in Montreal, Canada, the Institute, which is affiliated with the Faculty of Medicine of McGill University, is the research arm of the McGill University Health Centre (MUHC), whose mandate consists of concentrating on complex care in its community. The RI-MUHC includes more than 460 researchers and almost 1,300 students and fellows who are dedicated to various sectors of fundamental, clinical and health outcomes research at the Glen site and at the MUHC’S Montreal General Hospital. Its research facilities offer a dynamic multidisciplinary environment that fosters collaboration among researchers and benefits from discoveries to improve the health of patients throughout their lives. The RI-MUHC is supported in part by the Fonds de recherche du Québec – Santé (FRQS). www.rimuhc.ca