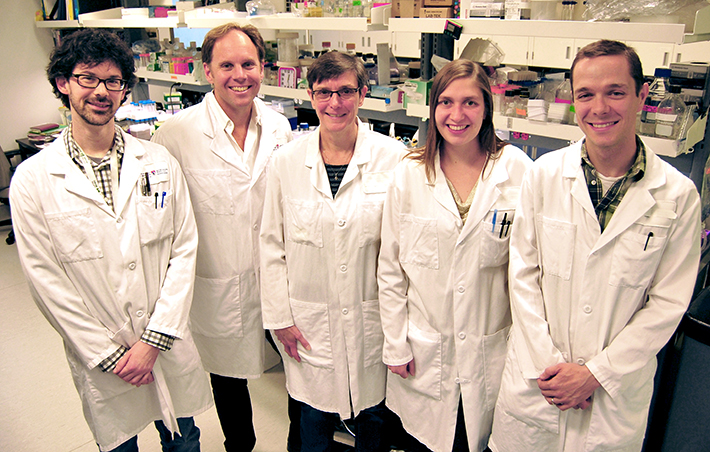 Montreal – Have you ever heard of biofilms? They are slimy, glue-like membranes that are produced by microbes, like bacteria and fungi, in order to colonize surfaces. They can grow on animal and plant tissues, and even inside the human body on medical devices such as catheters, heart valves, or artificial hips. Biofilms protect microbes from the body’s immune system and increase their resistance to antibiotics. They represent one of the biggest threats to patients in hospital settings. But there is good news – a research team led by the Research Institute of the McGill University Health Centre (RI-MUHC) and The Hospital for Sick Children (SickKids) has developed a novel enzyme technology that prevents the formation of biofilms and can also break them down. 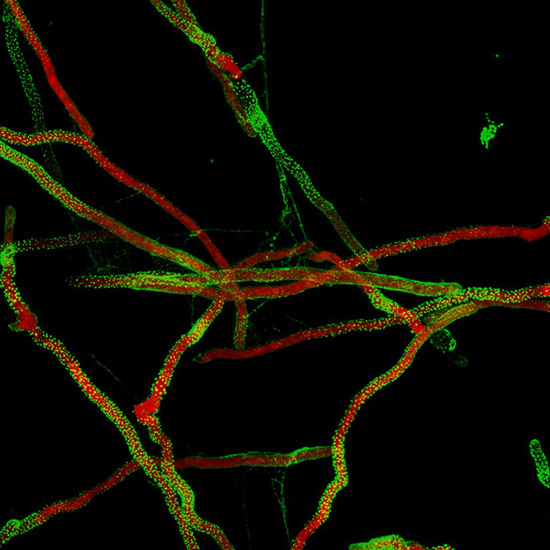 The fungus Aspergillus fumigatus (in red) produces a sticky sugar molecule (in green) to make a biofilm that is important for its virulence. It covers the fungus and allows it to stick to surfaces and tissues, making it difficult to remove and treat patients. Researchers developed a new innovative technique aimed at destroying biofilms.

This finding, recently published in Proceedings of the National Academy of Sciences (PNAS), creates a promising avenue for the development of innovative strategies to treat a wide variety of diseases and hospital-acquired infections like pneumonia, bloodstream and urinary tract infection. Biofilm-associated infections are responsible for thousands of deaths across North America every year. They are hard to eradicate because they secrete a matrix made of sugar molecules which form a kind of armour that acts as a physical and chemical barrier, preventing antibiotics from reaching their target sites within microbes.

“We were able to use the microbe’s own tools against them to attack and destroy the sugar molecules that hold the biofilm together,” says the study’s co-principal investigator, Dr. Don Sheppard, director of the Division of Infectious Diseases at the MUHC and scientist from the Infectious Diseases and Immunity in Global Health Program at the RI-MUHC. “Rather than trying to develop new individual ‘bullets’ that target single microbes we are attacking the biofilm that protects those microbes by literally tearing down the walls to expose the microbes living behind them. It’s a completely new and novel strategy to tackle this issue.”

This work is the result of a four-year successful collaboration between Dr. Sheppard’s team and scientists in the laboratory of Dr. P. Lynne Howell, senior scientist in the Molecular Medicine program at SickKids. They have been working to combat biofilms for several years, focusing on two of the most common organisms responsible for lung infections: a bacterium called Pseudomonas aeruginosa and a fungus called Aspergillus fumigatus. Infections with these organisms in patients with chronic lung diseases like cystic fibrosis represent an enormous challenge in medical therapy.

While studying machinery that these organisms use to make their biofilms, the scientists discovered enzymes that cut up the sugar molecules, which glue biofilms together. “Microbes use these enzymes to move sugar molecules around and cut them into pieces in order to build and remodel the biofilm matrix,” says Dr. Sheppard, who is also a professor in the departments of Medicine and Microbiology and Immunology at McGill University. The researchers found a way to use these enzymes to degrade the sugar armour, exposing the microbe to antibiotics and host defenses.

“We made these enzymes into an uncontrolled biofilm destroying machine that we can use outside the microbe where the sugar molecules are found,” explains co-first study author Brendan Snarr, a PhD student in Dr. Sheppard’s laboratory. “These enzymes chew away all of the sugar molecules in their path and don’t stop until the matrix is destroyed.”

“Previous attempts to deal with biofilms have had only limited success, mostly in preventing biofilm formation. These enzymes are the first strategy that has ever been effective in eradicating mature biofilms, and that work in mouse models of infection,” adds Dr. Sheppard.

“When we took the enzymes from bacteria and applied them to the fungi, we found that they worked in the same way on the fungi biofilm; which was surprising,” says the study’s co-principal investigator, Dr. P. Lynne Howell, who is also a professor in the Department of Biochemistry at the University of Toronto. “What’s key is that this approach could be a universal way of being able to leverage the microbes’ own systems for degrading biofilms. This has bigger implications across many microbes, diseases and infections.”

“Over 70 percent of hospital-acquired infections are actually associated with biofilms and we simply lack tools to treat them!” states Dr. Sheppard. According to both lead scientists, the potential of this novel therapy is enormous and they hope to commercialize it in the coming years.

Growth of a fungal biofilm

Biofilm grows on the fungus Aspergillus fumigatus (in red) as seen in this 20 hour time-lapse video. It covers the fungus and allows it to stick to surfaces and tissues, making it difficult to remove and treat patients.

Dr. Howell and Dr. Sheppard are also Network Investigators with the Canadian Glycomics Network (GlycoNet), one of the Networks of Centres of Excellence of Canada that has provided financial support for this work.

About The Hospital for Sick Children

The Hospital for Sick Children (SickKids) is recognized as one of the world’s foremost paediatric health-care institutions and is Canada’s leading centre dedicated to advancing children’s health through the integration of patient care, research and education. Founded in 1875 and affiliated with the University of Toronto, SickKids is one of Canada’s most research-intensive hospitals and has generated discoveries that have helped children globally. Its mission is to provide the best in complex and specialized child and family-centred care; pioneer scientific and clinical advancements; share expertise; foster an academic environment that nurtures health-care professionals; and champion an accessible, comprehensive and sustainable child health system. SickKids is proud of its vision for Healthier Children. A Better World. For more information, please visit www.sickkids.ca. Follow us on Twitter (@SickKidsNews) and Instagram (@SickKidsToronto)

Inappropriate and overuse of antibiotics in fight against tuberculosis in India