Dr. David Rosenblatt: A rare doctor with a common touch 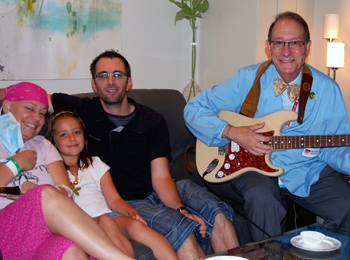 MUHC oncology patient Vicky Voyer with her daughter and husband seated next to volunteer minstrel Dr. David Rosenblatt, at the weekly Cedars Can Support [email protected]

“You gotta sing for your cake!” Dr. David Rosenblatt calls out to Dr. Rhagu Rajan. Until that point, Rajan was just another face in a crowd of MUHC patients, volunteers, and staff who had swept into the 17th floor Family Room of the Montreal General Hospital (MGH). The crowd was lining up to a table overflowing with sumptuous homemade desserts, elegant silver teapots and floral china tea cups. It was the Cedars CanSupport [email protected], a weekly event hosted by the gracious Linda Chernin-Rosenblatt, Dr. Rosenblatt’s wife, at the MGH and Royal Victoria Hospital.

Opposite the table, Dr. Rosenblatt was seated on a dark grey leather couch with his acoustic guitar. He’d been strumming and singing “Stand By Me” when Vicky Voyer, a cancer patient at the MGH, dressed in pink from bandana-covered-head to flip-flop-toe, plopped down onto the other sofa next to the doctor, with a boisterous “Hello!". Her husband settled in at the other end, and their young daughter snuggled between them.

“I love him,” she said with a broad smile, aimed at Dr. Rosenblatt. “I love his smile and gentleness. He reminds me of Dr. Patch Adams.” Voyer has been attending [email protected] for a while now, and it’s clear this weekly hour makes a huge difference, not just to her and other patients dealing with cancer, but for family members who experience the strain of coping while their loved ones are fighting the disease. The music, people, sweet treats and kind smiles go beyond a distraction; they are a community expression of support and comfort. “They should have something like this in every hospital,” Voyer said.

His bi-weekly gig as volunteer hospital minstrel is just one side of the exceptional Dr. Rosenblatt and his commitment to the well-being of patients. As chairman of the Department of Human Genetics at McGill and a professor of Human Genetics, Medicine, Pediatrics, and Biology, Dr. Rosenblatt has dedicated his career to researching rare genetic diseases.

To the general public, and even to some in the medical profession, rare diseases, not surprisingly, often suffer a low profile. Consequently, the value of studying them may be underappreciated for the benefits they bring not just to patients with rare diseases, but to the broader population. However, Rosenblatt sees the study of rare diseases as serving a practical, if not Hippocratic, purpose, “There are thousands of inherited genetic disorders, some of which are not at well known as others like cystic fibrosis, muscular dystrophy, sickle cell, Tay-Sachs, and thalassemia. But when you have a disease – whether or not it’s common – doesn’t matter; you still have the disease. So there is a need to care for people with rare disorders just as much as those with common disorders.”

Rosenblatt approaches his research with a dual perspective of being able to help actual patients while broadening the understanding of human biology. “One of the strengths of studying patients with rare diseases, particularly diseases with a genetic component, is that they are manageable, he explained. "You can get to the bottom of things and you can learn about the normal functioning of biology in all people.”

Rosenblatt works on many different rare diseases, but has been particularly focussed on patients with difficulty assimilating the critical vitamin B12, which is found only in foods derived from animals. A lack of B12 can cause anemia, problems with the brain and other serious medical issues.

Click to catch a glimpse of the [email protected] in action.

One might wonder about the bigger picture in researching something that affects relatively few people. To that, Rosenblatt, points to discoveries in the last century that helped us understand the source and importance of folic acid and vitamin B12 to the betterment of all people. In fact, two Nobel prizes were given to discoveries relating to vitamin B12 - one on how liver extract could reverse vitamin B12 deficiency, and one for determining the structure of the vitamin.

Rosenblatt’s interest in rare disease began in 1971, when he was in Boston researching how folic acid affected human health. He returned to McGill to work with people studying the problems associated with B12 absorption, including Dr. Bernard Cooper at the RVH and Dr. Michael Whitehead at The Children’s. Rosenblatt developed a referral network where patient samples were sent in from all over the world.  The biopsies were – and continue to be – used to grow cells and develop a series of tests to determine basic biological problems. “This allowed us to characterize patients into distinct groups and identify all of the genes responsible for their diseases.” That referral network has since evolved into one of the only two diagnostic labs of their kind in the world.

“At the MUHC, we are mandated to treat people with problems – common or rare. In a university hospital setting, we have the opportunity to work on basic discovery and lay the foundation of the medicine of the future. When you work in this area of medical or clinical research, you’re not looking for an immediate pay-off. The work we do is building a foundation of solid medical science that will be the medicine of the future.”

Rosenblatt points out that the world of rare disease is not all obscure, “Patient-based research in a teaching hospital setting is extremely applied. Teaching hospitals have an obligation to address the cutting edge as that may be prime time in the future.” He argues that if not for rare disease research “we would still be looking at how to create a better iron lung - instead of treating the biological basis of illnesses like cystic fibrosis.”

In the competitive world of funding, Rosenblatt has been fortunate, receiving continuous support since 1975. Though he had considered slowing down, technological advances have been conducive to making more discoveries as research that used to take years, now take just months. “The work I do now takes advantage of the expertise at places liked the McGill-Genome Quebec Innovation Centre. The beauty of McGill is that as one of the best universities in the world it must keep pace and continue to develop these technologies.”

Most recently, Rosenblatt has been working on the creation of a project known as RaDiCAL (Rare Disease Consortium for Autosomal Loci) that will list over 1,000 single gene disorders for which causal genes are not known. DNA samples will be collected from single patients with each of these diseases and next generation sequencing technology will be used to find candidate genes.

Rosenblatt also runs a diagnostic clinical lab that touches on everything from Huntington disease to hereditary breast cancer. As chairman of McGill’s Department of Human Genetics, Rosenblatt is deeply involved in developing the pedagogical aspects of the department, ensuring the medicine of the future will be well-served by the researchers of today.

Rosenblatt is as outgoing as he is uncommon. “I have a very balanced and good life,” said the doctor, who makes time to connect with patients in ways that might elude a rare disease researcher.  Drawing on his training as a pediatrician, Rosenblatt spends each Saturday seeing patients at the Jewish General Hospital. “This way, I can treat the common colds and ear infections,” said the affable doctor.

Where others might opt to sit back and take it easy, Rosenblatt finds new ways to heal his community from arranging  hockey contests for his students to serenading MUHC patients in the company of his beloved wife.