Home / News / Child Health and Human Development at the RI-MUHC

Child Health and Human Development at the RI-MUHC 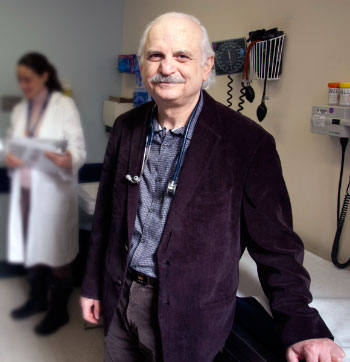 Dr. Constantin Polychronakos, researcher and leader of the Child Health and Human Development Program at the RI-MUHC and a professor in the Department of Pediatrics at McGill University.

Many diseases start before birth, some even before conception. Often they will affect patients throughout their lives. The recently created Child Health and Human Development program at the Research Institute of the McGill University Health Centre (RI-MUHC) will foster collaboration between pediatric and adult researchers with the aim of studying all stages of life, from egg and sperm to embryo, and from infancy and childhood to puberty and adulthood.

“The adult organism is pretty stable over decades, but within the first twenty years of life a lot of changes happen, both biologically and psychologically,” says Dr. Constantin Polychronakos, researcher and leader of the Child Health and Human Development Program at the RI-MUHC and a professor in the Department of Pediatrics at McGill University. “So, instead of examining just a slice of life at any given time, we’ll be looking at health aspects across the lifespan from a perspective of constant change.”

More than 50 laboratory-based, clinical and public health researchers will be part of the new program, sharing technology, knowledge and methodology, at the Glen site of the MUHC*.

“Scientists need to talk to one another. Let me give you an example: I’m currently doing DNA studies on Type 1 diabetes, but if I need information about population data related to this disease, I have good reasons to speak to the epidemiologists, biostatisticians and other researchers from the Centre for Outcomes and Health Evaluation (CORE), who will be working just across the street from the Glen site. The whole idea of having a program is to integrate different methodologies.”

The Child Health and Human Development Program is part of a new organizational structure at the RI-MUHC that will decentralize decision-making in certain areas, says Dr. Polychronakos.

“We’re growing bigger, so it makes sense to give some of the power to the researchers,” he adds. “Program directors will have more responsibilities and a budget to hire support personnel.”

According to Dr. Polychronakos, research at the MUHC, where tertiary and quaternary patient care is provided, is not a luxury, but a necessity.

“As medicine becomes more and more sophisticated, we need to be able to understand the latest research findings to constantly innovate the way we manage disease at the MUHC.”

In the same manner, hospitals around the world can apply important discoveries from RI-MUHC researchers to improve the lives of their patients.

“Research is international,” says Dr. Polychronakos, citing as an example the work of Pediatric Neurologist Dr. Genevieve Bernard, a young and promising recruit of his program. “Dr. Bernard has discovered two genes responsible for white matter deterioration in the brains of children who appeared normal at birth. We can now offer prenatal diagnosis to families who plan to have more children and advise them of the chances of a next child having the same problem.”

The new program will work closely with several scientists from the Translational Research in Respiratory Diseases Program at the RI-MUHC. According to Program Leader Dr. Basil Petrof, RI-MUHC researcher and Professor of Medicine at McGill, the exchange between adult and pediatric researchers is essential in understanding and treating genetically-based diseases such as cystic fibrosis and muscular dystrophy.

“As children with cystic fibrosis and muscular dystrophy become adults they develop severe respiratory problems which can be fatal,” Dr. Petrof explains. “So, it’s important to understand the progression of the disease from childhood to adulthood. Only then can you make an impact on that process.”

Most of the Child Health and Human Development Program’s researchers will occupy a floor and a half in the Centre for Translational Biology (CTB) at the Glen, where they’ll have access to cutting-edge equipment in state-of-the-art facilities. Dr. Polychronakos hopes to further enhance exchanges through different activities such as weekly seminars where scientists will have a chance to present their latest findings.

“We’re trying to integrate research, not to separate it by body parts or by methodology. There will be a period of adjustment at the beginning, of course, but I think our research will take off after that.”

Dr. Polychronakos speaks to the Canada Foundation for Innovation about his research on diabetes. Listen to the podcast

Other RI-MUHC programs located at the Glen site: