The Quebec Breast Cancer Foundation announced this week a $4.5 million investment for nine homegrown researchers, including six researchers affiliated with McGill, the MUHC and the Jewish General Hospital.  Over 20 years, the Foundation has invested more than $25 million in research, in the hopes of reaching its vision of a future without breast cancer.

With this 5th edition of its breast cancer research grants program, the Foundation is continuing its commitment to the Quebec medical and scientific community, investing in promising, innovative research projects. The grants range from $100,000 to $125,000 per year, over a four-year term. The selected projects have, among others, such goals as better understanding how cancerous cells function; developing medication and a vaccine against breast cancer; improving diagnosis; and finding new hereditary links that could help explain the prevalence of breast cancer among certain Quebec families.

Congratulations to our two RI-MUHC affiliated researchers, Dr William Foulkes and Dr Morag Park, who have been selected for their projects and awarded a $500 000 grant each. 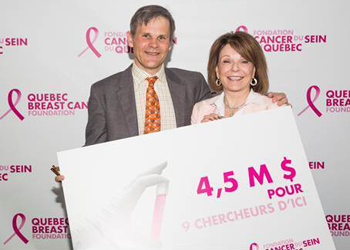 Dr. William Foulkes, MUHC cancer geneticist and researcher, and his team aim to identify new mutations that would help to explain why certain Quebec families are more frequently affected by breast cancer and to offer them prevention and risk reduction strategies. 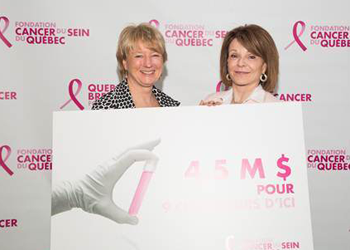 Dr. Morag Park, director of the Rosalind and Morris Goodman Cancer Research Centre at McGill University, and her team will test numerous medications to quickly identify whether existing treatments can act on the progress of cancer and the development of resistance of the disease.

“Once again this year, the many high-quality applications we received reveal the energy and vitality of Quebec’s breast cancer research community,” said Francine Cléroux, the Foundation’s chief executive officer. “As our understanding of the different types of breast cancer continues to improve, we can hope for even more targeted treatments with fewer side effects. Breast cancer affects more women in Quebec than any other kind of cancer, but thanks to the advances made in recent years, the five-year survival rate has reached 88%. The investment announced today, brings us closer to a future without breast cancer.”