It’s hard to appreciate how far you’ve come without looking back at where it all started.

To really understand how much has changed since our five hospitals came together as one health centre, we sat down with four of our longest standing Housekeeping section managers, who have been with us through thick and thin, since even before the great merger of 1997.

Today, Domenico Caruso works at the Montreal General Hospital (MGH), but he started his career at the old Royal Victoria Hospital (RVH) in 1990 as a cleaner, while putting himself through school to be a graphic designer. In 1997, everything changed and not just for the hospital. “That same year I got married and was promoted to section manager,” says Domenico, “and I haven’t looked back since!” 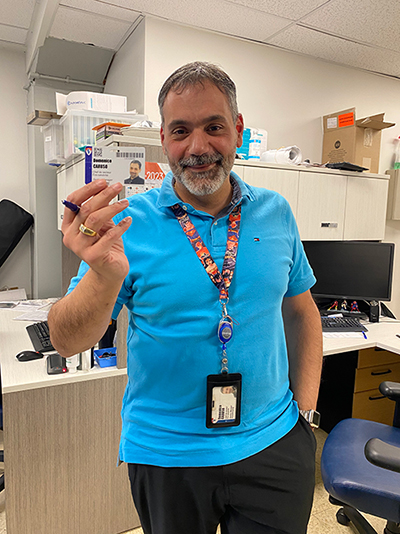 Domenico remembers how they didn’t have cell phones back then, so they had to use pagers (remember those?!) and desk phones to communicate with their teams on the floors. “I always had a pocket full of quarters whenever I was on call,” he recalls, “just in case I got paged and had to use a pay phone to call back.”

In 1997, the dress code for Housekeeping section managers consisted of shirts and ties (for the men, at least), except in the summer, and there was no such thing as casual Fridays. Also, though it was not that long ago, they still had what they called “light duty” for women and “heavy duty” for men. Staff was paid a dollar less per hour for light duty. 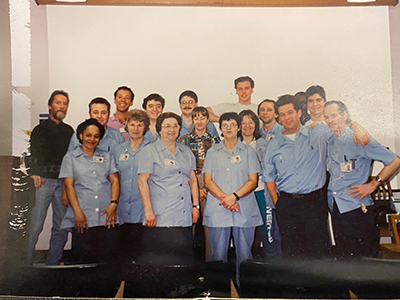 Line Adam works alongside Domenico as a section manager at the MGH, but back in 1997 she was a PAB at the old Montreal Children’s Hospital (MCH) on Tupper Street. “I remember the friendly, family spirit of the “Old Children’s”. Everyone knew each other’s name.”

Jean-Pierre (J-P) Di Stefano works as a section manager at the Glen site, but at the time of the merger, he worked at the MGH. “Sure, we had some concerns about the merger of such proud and well-loved hospitals,” he admits, “but we had a lot of fun working out our differences over friendly hospital-versus-hospital softball games and invitations to swim in each other’s pools.” If you can believe it, both the MGH and the RVH had fully functional swimming pools back then.

Today, Derek Mooreis a seasoned section manager working alongside Line and Domenico at the MGH. Back in 1997, he was a young father of a 3-year-old daughter and a 1-year-old son working at the MCH as a keen group leader and on special projects, and looking for opportunities to progress.

Out of his desk, Derek pulls out his ‘Pandora’s Box’ of memories from his time at the “Old Children’s”. It is filled with weathered photographs and ID cards of former colleagues, some of whom have since passed away, but all of which have made a long-lasting impression.

“With technology today, we are 100 years ahead of where we were back then,” he admits. “Administrative technicians used to manage the schedules for 70 people by hand. Now, HR’s Replacement Activities Team manages 700 people across all five sites.” Derek explains that with this new way of working comes more opportunity for our staff – better flexibility, better access to job postings and ultimately, a better chance to progress in their careers.

Derek admits, perhaps with reluctance, but with a hint of pride, that in the end, merging hospitals was a good thing.

“The reality is that there were concerns related to the merger of hospitals with such distinct cultures and identities, but we have overcome those together,” he says. “Today, after all these years, it has changed for the better, even for us old folks.”

Housekeeping Department Head Joe Derocher couldn’t agree more. “Each one of these individuals has grown professionally over the last 25 years and now works at a different site from where they started. The Housekeeping Service is now stronger and more integrated because of the merger.” 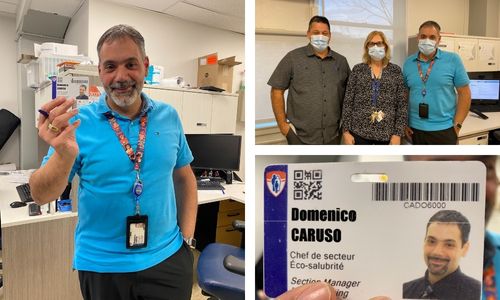