Jean-Jacques Lebrun’s team at the RI-MUHC has won the 2021 Québec Science Discovery of the Year Award for uncovering the genetic mechanisms at work in triple-negative breast cancers and finding a promising therapy. 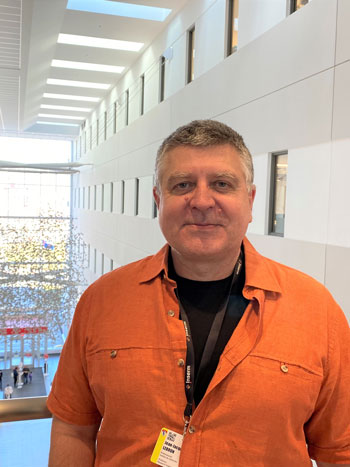 Montreal, March 22, 2022—Québec Science magazine keeps the tradition going: each fall for 29 years now, a jury of scientists and journalists selects the 10 most remarkable Québec discoveries of the past year, and invites the public to vote for its favourite. The readers’ vote for the 2021 Discovery of the Year went to the unveiling of the genetic mechanisms at work in aggressive triple-negative breast cancer and the discovery of a promising targeted combination therapy.

Each day, 75 Canadian women are diagnosed with breast cancer, and 15 die from it. While there is no targeted treatment for the most aggressive form of the disease, this could change thanks to the efforts of Jean-Jacques Lebrun, MSc, PhD, a scientist at the Research Institute of the McGill University Health Centre (RI-MUHC), and his team.

What if we started from the beginning?

That’s what Jean-Jacques Lebrun had in mind as he tackled triple-negative breast cancer, one of the most aggressive forms of the disease. While it accounts for about 15 per cent of cases, it causes half of all deaths. “Currently the only treatments are chemotherapy and radiation, and they don’t work well. The risk of metastasis and of recurrence is high,” explains the scientist.

To uncover the Achilles heel of these tumours, Lebrun’s team combed through their entire genome to detect which genes play a predominant role in the tumour process. Growing cancer cells from triple-negative breast cancer patients and using CRISPR-Cas9 technology, a sort of “genetic scissors”, the team proceeded to “turn off” each of the 20,000 genes one by one. The cancer cells were then transplanted into the mammary glands of mice. As the cells multiplied, the investigators were able to determine the ability of each gene to slow or halt tumour development.

The team identified two major signalling pathways, or “networks” of genes that modify cell behaviour. One of them, the mTOR pathway, is known to be deregulated in several cancers and to promote abnormal proliferation. The other, the Hippo pathway, is rather protective: in normal circumstances, it safeguards cells from tumour progression.
The scientists went on to test drugs that could potentially target these pathways. They found two that were effective: torin 1, a second-generation drug known to block the mTOR pathway, and verteporfin, a drug generally used for retinal disease that can activate the Hippo pathway. After testing them on cancer cells from hundreds of patients with different subtypes of triple-negative cancers, the scientists found that the drugs’ effect was greater when they were administered together than their individual effects combined, and that they succeeded in eradicating the tumour.

These results, which have been published in Nature Communications, are the result of five years of work. The next step is to set up clinical trials, a task Lebrun is now undertaking.
“Cancer affects each of us in one way or another. The interest our readers take in advances in the field of oncology is noticeable each year. This discovery is especially encouraging because it comes with a tangible hope of treatment,” says Marine Corniou, journalist and associate editor-in-chief of Québec Science.

“It’s an honour to win this award with a discovery in basic research. To date, very few studies have used genome-wide, in-vivo CRISPR genetic screening as we did. Our study highlights how powerful and robust this technology is to develop innovative and clinically relevant therapeutic modalities for cancer treatment. We know that many drugs fail in the clinical phase, but I’m optimistic because we started from the mechanism to develop a concrete solution,” says Jean-Jacques Lebrun, Senior Scientist in the Cancer Research Program at the Research Institute of the McGill University Health Centre and Professor of Medicine at McGill University.

“On behalf of the entire community of the Research Institute of the McGill University Health Centre, I wish to congratulate Dr. Lebrun and his team on this hopeful discovery. We are proud to provide researchers like Dr. Lebrun with an environment that combines biomedical research and clinical medicine. As the largest hospital-based research institute in Quebec, the RI-MUHC accelerates the translation of basic discoveries into public health, thereby contributing to improving the health of children and adults throughout their lives,” says Dr. Rhian Touyz, Executive Director and Chief Scientific Officer of the RI-MUHC.

About Québec Science
A major connecting bridge between the research community and the general public, Québec Science magazine addresses all science and technology-related questions and examines important current issues through a scientific lens. Published eight times a year by Vélo Québec Éditions, it is sold on newsstands for $6.95 and by subscription. Québec Science receives financial support from the Ministère de l'Économie et de l'Innovation du Québec.

About the RI-MUHC
The Research Institute of the McGill University Health Centre (RI-MUHC) is a world-renowned biomedical and healthcare research centre. The institute, which is affiliated with the Faculty of Medicine of McGill University, is the research arm of the McGill University Health Centre (MUHC) – an academic health centre located in Montreal, Canada, that has a mandate to focus on complex care within its community. The RI-MUHC supports over 450 researchers and around 1,200 research trainees devoted to a broad spectrum of fundamental, clinical and health outcomes research at the Glen and the Montreal General Hospital sites of the MUHC. Its research facilities offer a dynamic multidisciplinary environment that fosters collaboration and leverages discovery aimed at improving the health of individual patients across their lifespan. The RI-MUHC is supported in part by the Fonds de recherche du Québec – Santé (FRQS). rimuhc.ca

For information or interviews: