The Quebec Week for Disabled Persons takes place annually from June 1 to 7. This year's theme is "Contributing 100 per cent". According to the 2017 Canadian Disability Survey, in Quebec, more than one million people have a disability. This represents 16 per cent of the Quebec population aged 15 and over.

As part of a program at the adult education centre he attends, Joshua interns at the MUHC OPTILAB lab at the Rouyn-Noranda Hospital every Thursday and Friday. The goal of this program is to provide support to young adults with autism so that they can develop skills that will eventually allow them to move into a supervised apartment. Math and French classes are offered, but the program also includes courses to increase their independence in the community such as cooking and budgeting. The internship at OPTILAB gives Joshua a chance to gain experience in the workplace.

An environment tailored to Joshua's development and growth

Joshua assists the team with basic tasks that include preparing containers for urine and stool samples. He also arranges the bandages so they are easily accessible. "When the administrative agents have to distribute the containers to the patients, they are already ready," explains Pierre Lefebvre, OPTILAB manager and Joshua's father. “The team assigns him goals that he must complete in 30 minutes. He likes being given specific objectives. He is persistent and likes to complete the task he is given," says Pierre.

According to Pierre, this internship has allowed Joshua to open up to others and has helped him practice his social skills. Described as always in a good mood, Joshua brings a positive atmosphere to the department and the employees really appreciate him.

"The administrative agents think he's very pleasant. Everyone makes sure to greet him. If he doesn't recognize someone, he'll ask politely who it is," says Pierre. “One day, a young patient had to come in to take some blood samples. She was very stressed. When she saw Joshua walking down the hall in a good mood, she became less afraid.”

For Joshua's family, these work placements are an opportunity to help people learn about developmental disabilities like autism. "The more we see people with autism in society, the more people will understand and accept it. It also allows people to feel more comfortable, and it facilitates their integration later on," says Pierre.

As for Joshua, when asked what he thinks of this experience, he has no doubts: he loves his internship and his responsibilities! 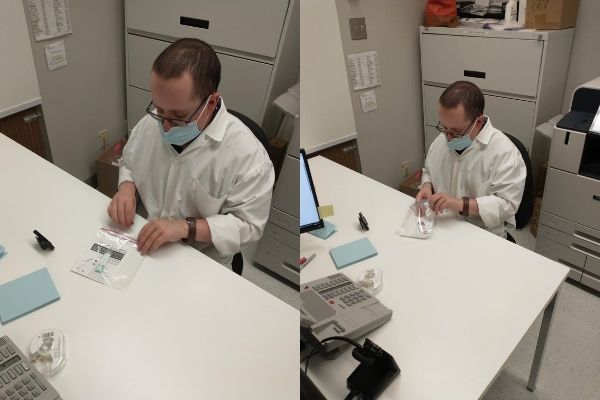