Thanks to an unprecedented collaboration between the Psychiatric Consultation-Liaison Service, the Clinical Nutrition Service and Food Services, First Nations and Inuit inpatients are now able to enjoy a traditional snack, bannock.

It all started in October 2021 when the Psychiatric Consultation-Liaison Service, responsible for psychiatric follow-ups for medical-surgical patients at the Glen site, received a request for consultation for a 70-year-old First Nations man, hospitalized for surgery due to cancer. He was refusing to eat and the surgical team was concerned that his inadequate nutrition was preventing his wound from healing properly. Dr. Marie-Josée Brouillette, a psychiatrist, accompanied by her two students, Megan Kouri and Brandon Hall, interviewed the patient. Despite their efforts, the patient remained unwilling to cooperate, and they were unable to find a single thing on the menu that he would consider eating.

As days passed, the surgical team grew more concerned as his wound still wasn’t healing. The entire healthcare team was at a loss with how to proceed. Then, one day, during one of Megan Kouri’s usual visits, the patient signaled that he was finally ready to tell her what they’d been trying to figure out all along. "Do you know why I am not eating?” he asked. “The food here reminds me of when I was in residential school. I was in a residential school for many years and even graduated from one. We were served food we did not like and were forced to eat it, even when it made us sick.”

"Our jaws dropped. The idea that food could bring up past trauma hadn't occurred to us," admits Dr. Brouillette. “We couldn't leave it at that, so we made a commitment to take action and make something positive out of the experience."

Dr. Brouillette enlisted the help of Julie Woodfine, a psychiatry liaison nurse with a long history of working up North with First Nations and Inuit communities. Together, the four of them set out to find a way to improve the hospital experience for these patients.

“If we offer kosher and vegan food, why can't we have something specific for our Indigenous patients?” questions Julie. “One idea that came to mind was to figure out how we could include their traditional bread, bannock, on the menu.”

Their next step was to contact Maryse Fournier, manager of Food Services at the Glen site, who took up the challenge of finding the perfect recipe without hesitation. “Why not?” Maryse asks. “Since bannock is only made of four ingredients – water, flour, baking soda, and oil – it is relatively simple to cook and store. 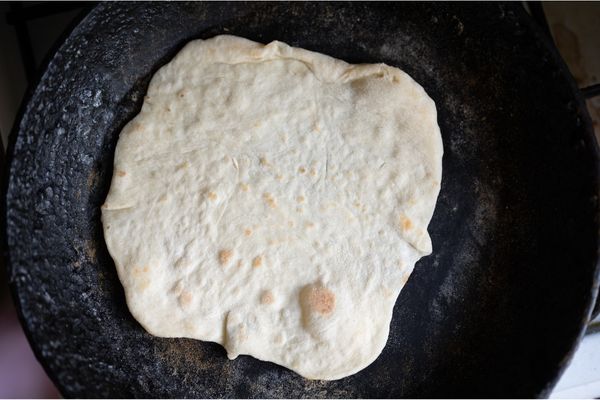 Maryse reached out to MUHC Indigenous interpreters for tips on where to find the best recipe. They spoke with friends and family on Maryse’s behalf, and while some weren’t prepared to share their family’s secret recipe, others were happy to do so. Before long, Food Services cooks had whipped up several samples in need of tasting.

Maryse enlisted the help of Manveen Sethi, a master's student in Nutrition, to test the various bannock recipes. “While Manveen was taste testing potential recipes with Indigenous patients, she was warned that one of them was a bit anxious, but when she came in with the bannock, he calmed down right away and was very grateful," explains Julie Woodfine. “When you think about it, when you're not feeling well, there are certain foods that make you feel good and that's the same in any culture."

Other than taste, many variables had to be considered, including the ingredients. “In Food Services, ingredients and allergens are a major preoccupation, so we aimed to find a recipe that would be both accepted by patients, and contain as little allergens as possible so it could be safely served to all,” explains Maryse. Preparation and storage were also considerations. “Bannock is usually cooked and eaten right away, so working the production into our already busy day was another challenge.”

There were also cultural nuances to consider. For example, First Nations people generally fry their bannock, while Inuit bake it. Some add raisins, while others enjoy it with jam and tea. Ultimately, Manveen was able to identify the winning recipe and it is already being prepared in MUHC kitchens and being offered to First Nations and Inuit patients, available to both adult and pediatric clientele.

One final challenge remained. Before receiving their meals, inpatients are assessed for their nutritional needs based on their condition. As with diabetic patients, often found in this patient population, there are many dietary rules that must be followed.

"Bannock may not be the ideal nutritional choice for some of our patients, but because this food is so socially and culturally symbolic to this community, our dieticians have found ways to adjust the diabetic diet to allow bannock to be included as a snack," Julie explains.

Regretfully, the patient at the centre of this chain of events has since passed away. However, his daughter was contacted and she was informed that, thanks to her father’s courage to share his story with the psychiatric consultants, bannock is now offered to Indigenous patients at the MUHC. “She was very pleased; she was laughing,” reports Dr. Brouillette.

Healing is as much about the heart and the mind as it is about the body. "We realize that food can continue to be a difficult factor for some patients, but we hope that this small change can soften their experience in the hospital," says Dr. Brouillette.