A Voyage of Discovery 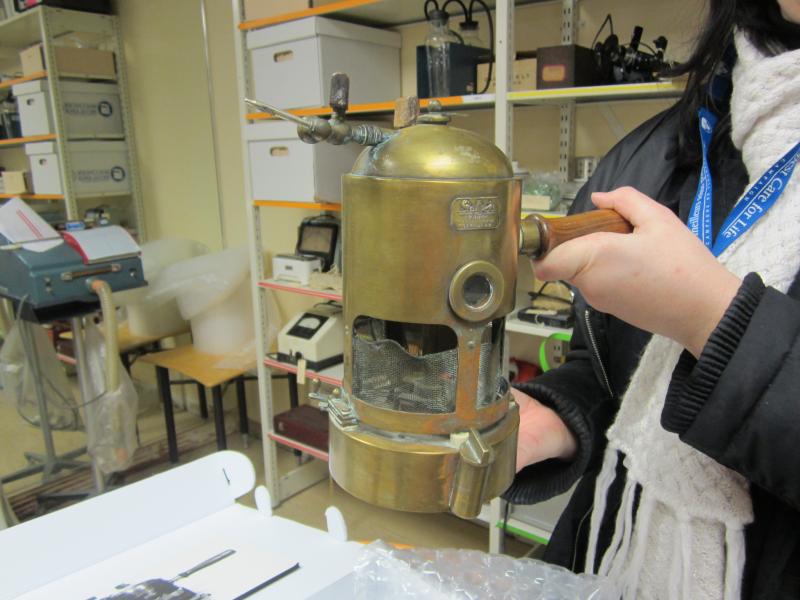 With the move to the Glen fast approaching, Karine Raynor, the Associate Director and Curator of the Heritage Centre of the MUHC, has a big job on her hands–sorting through literally thousands of art works, photographs and historical artifacts scattered throughout the MUHC hospitals.

Raynor began work on this project to collect and catalogue the historical artifacts of the MUHC in 2007, and it was soon after this that she discovered an “Aladdin's Cave” of treasures in the attic of the Royal Victoria Hospital. “It felt like entering a time capsule,” Raynor says. “There were so many artifacts you could hardly move. For decades, they had literally been accumulating there for safe keeping.”

Fast forward five years and about 1,600 artifacts have been inventoried, packaged and are ready for the move to the Glen. “We estimated that this number was about 30 per cent of the entire collection,” says Raynor. Then The Montreal Children's Hospital called to say they had as many as 15,000 photographs that document more than a century of hospital history. “The collection is constantly growing because of involvement like this from the MUHC community,” says Raynor, who singles-out Friends of the MUHC particularly for their support. “They come in twice each week to help catalogue artifacts. We simply couldn’t do this without their support.”

The more objects that are added to the collection, the better Raynor is able to tell the story of the MUHC and the great people that have been part of the organization through the years. “It's a great opportunity, and a very rare one, to build a collection from the ground up,” she says. “These artifacts will make fascinating viewing when they go on public display at the Glen.”

So, were there any great surprises? Raynor responds without a moment’s hesitation: “Lister's antiseptic spray was a huge find,” she says. That sentiment is shared by Dr. Jonathan Meakins – a retired McGill professor, former surgeon-in-chief of the MUHC, and the enthusiastic Director of the Heritage Centre who works alongside Raynor to document and describe the historical medical equipment.

“Lister's antiseptic spray was developed by the British surgeon Lord Joseph Lister, and was introduced in Canada in 1877 by Dr. Thomas Roddick, who was the Dean of Medicine at McGill,” says Dr. Meakins. “It revolutionized surgery in Canada, reducing post-operative infection rates from 45 to 15 per cent.”

Dr. Meakins holds the small brass canister in his hands. To the uninitiated, it could easily pass as an old lantern with a large wood handle projecting from the side. “The carbolic acid stored in a glass jar attached to the side would be heated,” he says. The vapour would then be sprayed throughout the operating room, to sterilize everything from the surgical instruments to the patient, and even the air.

Interestingly, Lister’s spray led to another infection-reducing practice that is a medical standard today – the use of rubber gloves. “The carbolic acid from the spray would cause the surgeons and nurses hands to become red and inflamed,” says Dr. Meakins. “This forced them to start wearing rubber gloves, which turned-out to further reduce post-operative infections.”

A wealth of fascinating historical medical equipment has been discovered at the MUHC, but according to Dr. Meakins one other discovery is particularly remarkable for its peculiarity. Dr. Meakins opens an old black case containing an assortment of delicate glass tubes, some resembling combs, others resembling funnels and bulbs.

“This object is called a ‘Renulife Violet Ray Generator,” he says. “But really it heals nothing at all. It’s basically ‘snake oil’ and was probably used by ‘quacks’ in corner-shop pharmacies.” The device emits violet rays, which were said to cure everything from dandruff, to piles, to sore joints and headaches. The manufacturers even claimed it could cure ‘female complaints’, although they failed to clearly define the term.

“It’s these unique and exceptional pieces that really complete a collection like this,” says Raynor. “They don’t have great monetary value, but their value to the institution and the history of medicine in Montreal is priceless.”