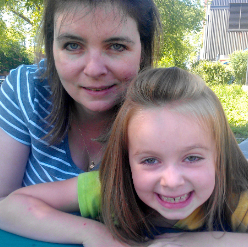 As Mia sits drawing, she stops and looks up when asked about how she felt when her cancer treatments ended. The six-year-old’s blonde streaked hair has grown back and a barrette keeps her bangs from falling into her big blue eyes. Her smile says it all.

In 2008, before she was even three years old, Mia was diagnosed with acute lymphoblastic leukemia (ALL). This fast-growing type of blood cancer occurs when too many lymphoblasts (immature white blood cells) are found in the blood and bone marrow. It accounts for approximately 70 per cent of all childhood leukemia cases.

“When Mia started complaining of a sore hip accompanied by a fever and lethargy I took her to a local hospital,” says Mia’s mom Mélina. “They found nothing and sent me home saying it was probably complications following a viral infection and to give her Advil.”

A week later, Mia stopped walking. Without a minute’s hesitation, Mélina put Mia in the car and drove to The Montreal Children’s Hospital (MCH). They arrived at 5 p.m. in the Emergency Department and by 8 p.m. a team of oncologists informed Mélina that Mia had leukemia.

Mia immediately underwent an operation to insert a portacath, which is a small medical device that is installed beneath the skin through which drugs can be injected and blood samples can be drawn many times. For the next two years and two months she received a cocktail of chemotherapy and various medications.

The MCH taught Mélina how to care for her daughter at home and she was assigned a social worker who called regularly to ensure everything was okay. Mélina—like all families going through a cancer diagnosis—was also assigned a family resource nurse available for any questions during work hours, Monday to Friday. Outside of these hours, Mélina called The MCH and the physician on call would immediately address her concerns.

“This brought me great peace of mind,” says Mélina, who is a single mom and had to stop working and move in with her mother to care for Mia. “I was scared and just kept thinking what if, what if. I couldn’t have done it without this support. Everyone was very caring, from the physicians we saw to the volunteers who provided me with breaks when we were in the hospital, sometimes weeks at a time.”

According to Dr. David Mitchell, 85 to 90 per cent of children diagnosed with ALL are cured. However, since the disease can come back several years after diagnosis and after treatments have stopped, one is hesitant to claim victory too early. “Mia is doing very well,” he says, “and we are happy with her outcome.”

Mia is now looking forward to grade 1. She takes swimming lessons, loves to paint and colour, and can dance up a storm while belting out anything from Adele to Janis Joplin. Mélina is back to work and has her own place again.

“I am really happy to be a regular kid again,” says Mia. “But I miss the clowns and crafts and people who played with me when I was at the hospital. They were fun and made me laugh.”

Volunteering at the Research Ethics Board: a rewarding commitment